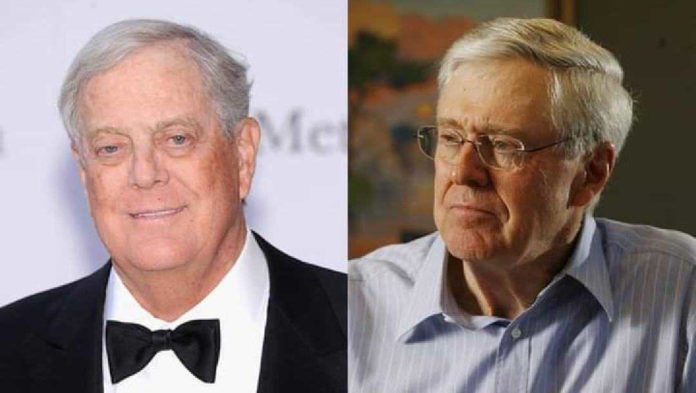 We live in an era of truly incredible wealth and vast inequality between the richest billionaires and every day middle-class people. The 50 richest families in the world have a combined net worth of $1.2 trillion. The Koch Brothers combined net worth is $100 billion, which is up from $98.7 billion at the end of 2018 and is good enough to make them the second wealthiest family in America. The family is also extremely influential in politics, especially in far right-wing issues. The Kochs, in particular, have spent hundreds of millions of dollars to bring their fringe political ideas to the center of American politics. The family fortune got its start when the late Fred Koch joined the Keith-Winkler Engineering Company in 1925. The family fortune grew when his sons, Fred Jr., Charles, Bill, and the late David Koch took over their father’s business and turned it into the powerful and successful conglomerate it is today.

When Fred Sr. joined the Wichita, Kansas-based Keith-Winkler Engineering company, he quickly made his mark and was made a partner. The company had a big breakthrough with a technique for refining gasoline. Lawsuits from larger, more established companies, prevented Koch’s company from using this new technique. Fred packed his bags and headed to Europe in the years just before World War II. He found a job working for the legendary Russian dictator Stalin, who paid Koch $500,000 to build 15 oil refineries in the Soviet Union in the 1940s. Koch also worked with the American Nazi sympathizer William Rhodes Davis to build an enormous oil refinery for the Third Reich. The Koch built refinery was integral to Hitler’s war machine. That refinery went on to produce hundreds of thousands of gallons for the Luftwaffe. It was destroyed by Allied airstrikes in 1944.

Speaking of Fred Koch’s ties to Nazis and Nazi sympathizers, in 1938, he said that the only sound countries in the world were Germany, Japan, and Italy. He hired a nanny for his sons that was such a dedicated Nazi, she returned to Germany in 1940 to join Hitler’s cause. After the Nazi nanny left, Fred became the disciplinarian. He frequently whipped his sons with belts. This is just one of the crazy stories in the book “Dark Money” by Jane Mayer.

Fred Koch founded the Wood River Oil and Refining Company in 1940. In 1946, he changed the name of the company to Rock Island Oil and Refining Company. He and his wife Mary had four sons – Fred Jr., Charles, and twins David and Bill. Fred Jr. had no interest in the family business, which, by the way, was worth $80 million in 1960. Charles, however, was very interested in the family business and joined it in 1961 when he was 26. By 1966, he was president of the company. When Fred Sr. died in 1967, Charles became chairman of his father’s company, which was worth $250 million at the time. In 1968, Charles renamed the company Koch Industries after his father. David and Bill joined the family business in 1970 and 1971, respectively.

However, all was not well behind closed doors. The brothers had different ideas on how to run the family business. At one point, the 20-year-long battle between the brothers got so bitter that they hired private investigators to dig up dirt on each other. At one point, Bill’s investigator went through the trash at the homes and offices of Charles, David, and their lawyers after Bill reportedly bribed garbage collectors and janitors. Then, in 1980, Bill attempted a coup to take over the board of the family company and force his brothers out. Charles and David prevailed over that battle and fired Bill. He was given $400,000 to go away. The problem was, Bill and Fred Jr. still owned shares in Koch Industries. So it was Bill and Fred Jr. versus Charles and David. In 1983 the brothers finally reached a settlement. Bill was paid $620 million for his 21% stake in the company. Fred was paid $400 million. Then, just two years later, in 1985, Bill and Fred took Charles and David to court on the grounds that their shares had been undervalued in the 1983 settlement. That case reached a settlement of $25 million.

That wasn’t the end of it, however. In 1998 Koch vs. Koch Industries reignited the family drama. Charles and David prevailed once again and Bill told reporters he was going to appeal and called his brothers crooks. Bill and Fred ended up with $1.1 billion each in the end. Then, in 2001, Charles, David, and Bill met at Bill’s Palm Beach, Florida estate to sign a final settlement dividing their father’s fortune and property. It was the first time the brothers had dinner together in nearly two decades.

The Koch brothers are also a force to be reckoned with in politics. In 2017, Koch Industries gave $1.3 million to congressional candidates. In 2018, they spent $400 million in the midterm elections. In 2020, they donated $1.5 million to the election cycle.

David Koch passed away on August 23, 2019, leaving just one brother at Koch Industries. Prior to his passing, Charles and David owned a 42% stake each in the family business. David left $41 billion to his widow, Julia Koch, and his 42% stake in Koch Industries to Julia and their three children, who are all in their early-to-mid 20s. Julia married David Koch in 1996 at his home in Southampton, New York. A former assistant at the fashion house Adolfo, Julia gave up her career to be the wife of a billionaire. One of her roles as David Koch’s wife was maintaining their residences in Manhattan (Jackie Onassis’ former apartment), Southampton, Aspen, and West Palm Beach. Julia was embraced by New York society and much admired for marrying one of the richest men in the country. She is an active philanthropist who has given money to the Lincoln Centre, the Metropolitan Museum of Art, and the Smithsonian Museum of Natural History. It is Julia, in fact, who is largely credited with instilling a love of art in her husband. She also was a factor in the fact that he was more socially prominent than his brothers.