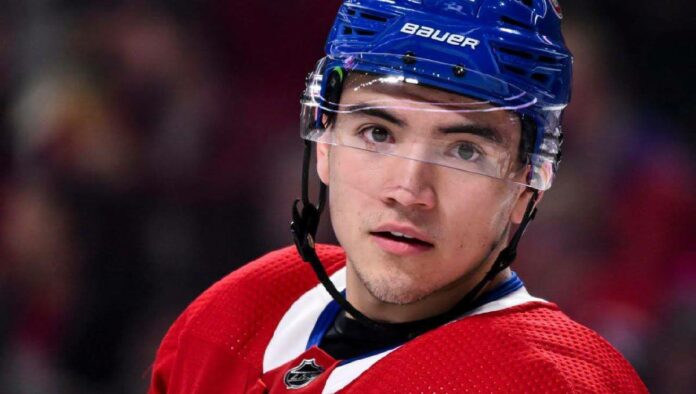 Nick Suzuki is a Canadian professional ice hockey center and alternate captain for the Montreal Canadiens of the National Hockey League (NHL). He was drafted 13th overall by the Vegas Golden Knights in the 2017 NHL Entry Draft.

Nicholas Suzuki was born on August 10, 1999 (age 22 years) in London, Ontario, Canada. He is the son of Rob and Amanda Suzuki. He suffered from a number of childhood illnesses, including hand, foot, and mouth disease, pneumonia, respiratory syncytial virus, and a series of ear infections that required surgery to insert ear tubes. He ultimately underwent tympanoplasty to reduce the recurrence of ear infections and began skating shortly after his health improved.

Suzuki was eight years old when he befriended neighbor and fellow ice hockey player Isaac Ratcliffe, and in the summer, Suzuki and Ratcliffe would play golf and soccer together, where they were coached by Suzuki’s father. Suzuki and Ratcliffe went on to play minor ice hockey together for the London Jr. Knights of Alliance Hockey. During the 2014–15 season, Suzuki was named Alliance Hockey Player of the Year after leading the league with 34 goals and 68 points in 31 games.

The Owen Sound Attack of the Ontario Hockey League (OHL) drafted Nick Suzuki in the first round, 14th overall, of the 2015 OHL Priority Selection. He had a quick impact on the team, with two goals and one assist through the first three games of the 2015–16 OHL season. He was named the Attack Player of the Week at the end of October after scoring two goals in a 4–1 win over the Guelph Storm and following that effort with an assist in a 2–1 victory over the Flint Firebirds.

Nick Suzuki closed out the first half of the season with a breakaway overtime goal to lift the Attack 4–3 above the London Knights on December 19. The following month, Suzuki recorded his first OHL hat-trick in a 5–2 defeat of the Ottawa 67’s. With 20 goals and 18 assists in 63 games for Owen Sound, Suzuki was both the recipient of the Harry Lumley Memorial Award, given to the Attack’s Rookie of the Year and was named to the OHL All-Rookie First Team.

Check Out: Morgan Rielly net worth

Suzuki added another two goals in six postseason games before the Attack were eliminated by the Knights. Entering the 2016–17 OHL season, Suzuki was considered one of the NHL Central Scouting Bureau’s Players to Watch for the 2017 NHL Entry Draft. By midseason, Suzuki outpaced his rookie season with 20 goals and 23 assists in 33 games and received an invitation to the CHL/NHL Top Prospects Game. Suzuki finished his sophomore season fifth in the OHL with 45 goals and 51 assists for a total of 96 points in 65 games.

In addition to being named an OHL Second-Team All-Star, Suzuki’s 10 penalty minutes awarded him both the William Hanley Trophy and the CHL Sportsman of the Year Award, given to the most sportsmanlike player in the OHL and Canadian Hockey League, respectively. The Vegas Golden Knights of the National Hockey League (NHL) selected Suzuki in the first round, 13th overall of the 2017 NHL Entry Draft, and he signed a three-year, entry-level contract with the team on July 15.

Nick Suzuki was invited to the Golden Knights’ training camp just before the 2017–18 season but returned to the Attack on September 22. He began the 2017–18 OHL season as an assistant captain for the Attack, supporting captain Jacob Friend. Suzuki scored another hat-trick on November 19, scoring three goals in a 6–4 victory over the Firebirds. Suzuki set a number of milestones over the course of the 2017–18 season, with his 200th OHL point on February 3, followed by his 100th goal on March 10. In the Attack’s regular-season finale, Suzuki recorded two goals and an assist, finishing the season with 42 goals and 58 assists.

Suzuki was only the fifth player in franchise history to record 100 points over the course of one season and was the first since Bobby Ryan during the 2006–07 OHL season. In the postseason, Suzuki added another goal and five assists in Owen Sound’s first-round sweep of London, but the Attack lost to the Sault Ste. Marie Greyhounds in the next series. In addition to taking home the 2018 William Hanley Trophy for his 18 penalty minutes, Suzuki received the Tommy Burlington Award as the Attack’s leading scorer, as well as the Jerry Reid Memorial Award for Owen Sound’s regular-season MVP. Once the OHL season ended, Suzuki joined the Chicago Wolves, the Golden Knights’ American Hockey League (AHL) affiliate, for their Calder Cup run.

He made a brief appearance in the final game of the Wolves’ sweep at the hands of the Rockford IceHogs and was subsequently assigned to the Golden Knights’ taxi squad for the remainder of the 2017–18 NHL season. On September 10, 2018, while playing junior ice hockey for Owen Sound, Suzuki was sent to the Montreal Canadiens alongside Tomáš Tatar and a second-round pick in the 2019 NHL Entry Draft in exchange for veteran player Max Pacioretty. In a blockbuster trade made halfway through the season, the Attack sent Suzuki, Zachary Roberts, and Sean Durzi to the Guelph Storm in exchange for forwards Zachary Pointer and Barret Kirwin, defenceman Mark Woolley, and draft picks in the next four OHL Priority Selections.

At the time, Nick Suzuki had 22 goals and 45 points in 30 games of the 2018–19 OHL season. While he had played at centre for most of his hockey career to that point, Suzuki also spent time on the wing for Guelph. He recorded his 300th career OHL point with his new team on February 20, helping push Guelph past Flint 5–4 in the process. After the trade, Suzuki scored 12 goals and 49 points in 29 games for Guelph, finishing the season with a cumulative 34 goals and 94 points in 59 games. With 12 penalty minutes for the season, he took home the William Hanley Trophy for the third consecutive season.

He added another 16 goals and 42 points in 24 playoff games, including three goals and 11 points in the Storm’s six-game OHL championship series. For his efforts, Suzuki won the Wayne Gretzky 99 Award as Guelph took home the J. Ross Robertson Cup. While the Storm was eliminated from the 2019 Memorial Cup by the Halifax Mooseheads, Suzuki, who had three goals and four assists in four games without taking a penalty, also took home the George Parsons Trophy for the most sportsmanlike player in the tournament. He concluded his OHL career as a Third Team All-Star for the 2018–19 season.

Nick Suzuki made his NHL debut on October 4, 2019, in a 4–3 shootout loss to the Carolina Hurricanes after being named to the Canadiens’ 2019–20 opening night roster. He scored his first NHL goal in his seventh career game, knocking the puck past Alex Stalock in a 4–0 shutout win over the Minnesota Wild. Victor Mete also scored his first goal in the same game, making him and Suzuki the first Montreal teammates to score their first goals in the same game since Chris Higgins and Alexander Perezhogin in 2005.

Suzuki spent the first half of the season alternating between centre and the wing as needed, but on December 27, after recording seven goals and 19 points through the first 37 games of the season, he was given a promotion to the second line as a temporary replacement for the injured Joel Armia. On February 13, with an assist on Ilya Kovalchuk’s game-winning goal against the Toronto Maple Leafs, Suzuki became the first rookie forward to reach 35 points in a season since Higgins in the 2005–06 season. With 10 points, four goals, and 35 shots in the month of February, Suzuki took home the Molson Cup for the month. By the time the regular NHL season was suspended indefinitely due to the COVID-19 pandemic, Suzuki had 13 goals and 41 points in 71 games.

Check Out: Kyle Turris net worth

When the NHL returned to play for the 2020 Stanley Cup playoffs in July, Nick Suzuki was one of 31 Canadiens selected to play in the Toronto quarantine bubble. He scored his first postseason NHL goal in the first round of Stanley Cup qualifiers, putting the Canadiens up 2–0 in an eventual 3–2 win over the Pittsburgh Penguins. Montreal defeated Pittsburgh in the qualifiers but lost to the Philadelphia Flyers in the Eastern Conference First Round. Suzuki tied Jonathan Drouin to lead the Canadiens with seven points (four goals and three assists) through 10 playoff games.

By the time of the 2020–21 season, Nick Suzuki had established himself as one of the Canadiens’ most important players, registering 41 points in each of his first two regular seasons, the latter in only 56 games. He had even better results in the playoffs, and during the Canadiens’ deep run to the 2021 Stanley Cup Finals registered 7 goals and 9 assists. In the final games of the regular season and the playoffs, he was paired on a line with newcomer Cole Caufield, and the two were widely praised for their linemate chemistry and offensive results. With the departure of Phillip Danault in the off-season to the Los Angeles Kings, Suzuki was dubbed “the clear-cut top pivot of the team” going forward.

Nick Suzuki signed an eight-year, $63 million contract extension with the team on October 12, 2021. Following the successful use of an offer sheet by the Carolina Hurricanes on restricted free agent Jesperi Kotkaniemi, there was considerable speculation in sports media that the Canadiens would seek a new contract with Suzuki well before he reached the end of his entry-level deal. Suzuki recorded his 100th point in a December 7, 2021 game against the Tampa Bay Lightning. In February he was the Canadiens’ representative in the 2022 All-Star Game.

Suzuki lead the team in points, albeit at a lower scoring pace than in the prior season, through the difficult first 50 games of the season, which were historically unsuccessful for the Canadiens. At the beginning of February, the team’s new general manager, Kent Hughes, sacked coach Dominique Ducharme and replaced him with retired star forward Martin St-Louis. St-Louis brought about significant changes in team performance, with Suzuki now joined by Caufield and Josh Anderson on the first line, with immediate positive results. On April 16, he scored his 20th goal of the season against the Washington Capitals, hitting that mark for the first time. He was the only man to play every game of the season for the Canadiens and entered the top ten list of active iron man streaks in the league.

Nick Suzuki is currently not married but is in a relationship with his longtime girlfriend Caitlin Fitzgerald. His wife Caitlin soon to be is a private person. However, Suzuki is the older brother of Chicago Wolves center and Carolina Hurricanes’ top prospect Ryan Suzuki, and his grandfather is a cousin of environmentalist David Suzuki. He is a fifth-generation Japanese Canadian (Gosei) and is one-quarter Japanese on his father’s side of the family. On his mother’s side, he is of Scottish Canadian descent.

How much is Nick Suzuki worth? Nick Suzuki net worth is estimated at around $10 million. His main source of income is from his career as an ice hockey player. Suzuki successful career has earned him some luxurious lifestyles and some fancy cars trips. He is one of the richest and influential ice hockey players in Canada. However, during his junior career, Suzuki was part of Team Canada at the 2016 Ivan Hlinka Memorial Tournament and the 2019 World Junior Ice Hockey Championships. Suzuki was named to the 55-man longlist for the Canadian men’s hockey team at the 2022 Winter Olympics.