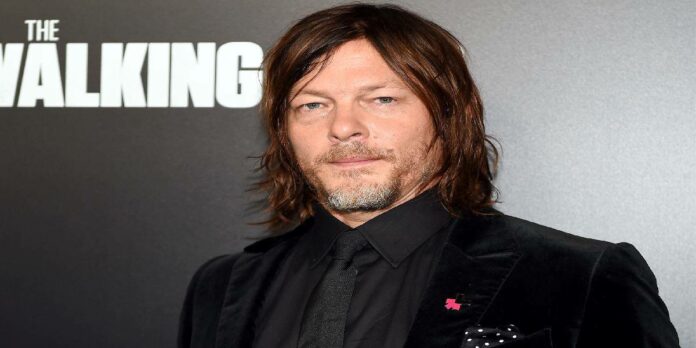 Norman Reedus is an American actor. He is best known for starring in the popular AMC horror drama series The Walking Dead as Daryl Dixon, in the film The Boondock Saints (1999) and its sequel The Boondock Saints II: All Saints Day (2009) as Murphy MacManus, as Scud in Marvel’s Blade II (2002), Marco in Deuces Wild (2002) and for his AMC TV show Ride with Norman Reedus.

He has acted in numerous films and television series, and modelled for various fashion designers (most recognizably Prada in the 1990s). Reedus also provided motion capture and voice acting for the lead character Sam Porter in the video game Death Stranding (2019).

Norman Mark Reedus was born on January 6, 1969 (52 years) in Hollywood, Florida, United States. He is the son of Marianne Yarber, a teacher, and Ira Norman Reedus. Reedus’s paternal grandmother was of Italian descent, while his grandfather had British (English and Scottish), and Irish ancestry.

He attended Bethany College in Lindsborg, Kansas, for a semester. After living in Tokyo, he came to California to work at a Harley-Davidson shop in Venice, California and contributed artwork to various shows as a painter, photographer, sculptor, and video artist.

Reedus first acted in the play Maps for Drowners at the Tiffany Theater on Sunset Boulevard. He was discovered at a bar in downtown Hollywood, singing and dancing where someone asked him if he wanted to act in a play.

Norman Reedus played Jeremy in his major film debut Mimic and Mac in Giovanni Rodriguez’s Red Canyon. Reedus played Murphy MacManus in the 1999 film The Boondock Saints. He reprised the role in the 2009 sequel The Boondock Saints II: All Saints Day. He played Scud in Blade II. He guest-starred in Charmed as Nate, the boyfriend of Paige (Rose McGowan).

Reedus starred in Hello Herman, which opened nationwide and on-demand on June 7, 2013. Reedus currently stars in the reality series Ride with Norman Reedus, which premiered in June 2016. Most recently, he started Bigbaldhead Productions with an overall deal at AMC.

Norman Reedus began playing Daryl Dixon in the AMC television series The Walking Dead in 2010, a horror drama about a group of friends and family members who fight to survive in a violent apocalyptic world populated with flesh-eating zombies and the few surviving humans. The character was not originally in the comic book series of the same name but was created specifically for Reedus after his audition for the character of Merle Dixon.

The Walking Dead comic creator Robert Kirkman feels “absolutely blessed Reedus has honoured the show with his presence, and the way he has come in and taken over that role and defined Daryl Dixon. A lot of Reedus’s portrayal of the character in the first season inspired all the writers to do what we did with him in the second season. We love writing him and end up doing cool stuff with him.” The drama has evolved into the highest-rated in cable history, smashing all previous records. Reedus was nominated for a Saturn Award for Best Supporting Actor for his performance.

Norman Reedus is also set to reprise his role of Daryl as the lead of a spin-off series centred on his character and Carol Peletier (played by Melissa McBride), following the conclusion of the 11th and final season of The Walking Dead. Angela Kang will be the showrunner for the series, which is set to debut in 2023.

Norman Reedus has modeled for Prada, Alessandro Dell’Acqua, Durban, Levi’s, Lexus, and Morgenthal Fredrics. In 2015, Reedus posed for a Cruelty-Free International advertisement in support of ending cosmetic tests on animals.

In the mid-1990s, while working as a model, he appeared in the music videos for “Wicked as It Seems” by Keith Richards, “Violently Happy” by Björk, “Flat Top” by Goo Goo Dolls, “Cat’s in the Cradle” covered by Ugly Kid Joe, “Strange Currencies” by R.E.M., and “Fake Plastic Trees” by Radiohead.

Check Out: Ben Barnes net worth

He is also a painter, sculptor, and photographer, who currently shows his artwork in galleries in New York City, Berlin, and Frankfurt. He released a book of photography on October 31, 2013, called The Sun’s Coming Up… Like a Big Bald Head, and in September 2014 announced a fan-art compilation called Thanks for All the Niceness.

Norman Reedus reprised his role as Daryl Dixon in the 2013 video game The Walking Dead: Survival Instinct, which is based on the television series. He was set to star in Hideo Kojima and Guillermo del Toro’s reboot horror game Silent Hills, but Kojima left Konami and the game was cancelled in 2015. Reedus starred in Hideo Kojima’s video game Death Stranding.

Norman Reedus’s current wife is Diane Kruger. In 2015, during the filming of Sky, Reedus met his now partner Diane Kruger; the two were first seen together as a couple in July 2016. In November 2018, his wife Diane Kruger gave birth to their daughter; his second and her first child. However, Norman Reedus was in a five-year relationship with supermodel Helena Christensen from 1998 to 2003. Despite reports to the contrary, the two were never married. Together they have a son, Mingus Lucien Reedus (born 1999). They have remained friends and shared joint custody of their son.

What is Norman Reedus net worth? Norman Reedus net worth is estimated at around $25 million. His main source of income is from his acting career. Reedus successful career has earned him some luxurious lifestyles and some fancy cars. He is one of the richest and influential actors in Florida. However, in February 2005, Reedus sustained a head injury when a truck collided with his car in Germany. His nose was reconstructed with the aid of four screws and his left eye socket with titanium.

02/09/2021
Read the complete write-up of Levi Miller net worth, age, height, movies, Tv shows, wife as well as other information you need to know. Introduction Levi...

26/03/2021
ABOUT US
Our Motive is to provide reliable, accurate and timely news to you. We're social, connect with us: The Urban and Rural at heart ❤️
Contact us: [email protected]
FOLLOW US
© Apumone 2021 All Rights Reserved