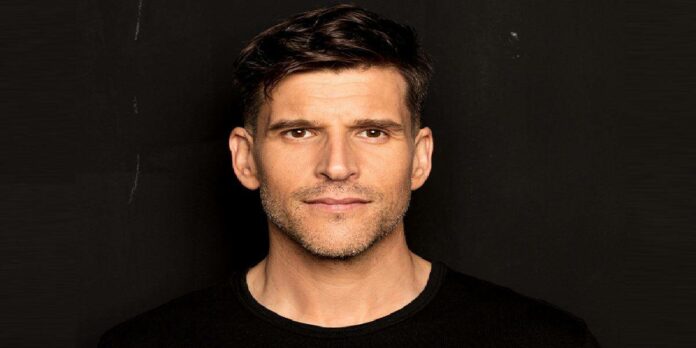 He is also known for his hosting roles on Channel [V], Australian Idol, Live to Dance on CBS and radio shows including Taking 40 Australia and The Hot Hits. Günsberg also narrated the factual television program Recruits. He was a regular contributor to The Project.

Osher Andrew Günsberg was born on March 29, 1974 (age 47 years) in London, United Kingdom. Günsberg holds dual British and Australian citizenship. He is the son of Birutė Mikužytė and Michael Günsberg. He was active in the Brisbane band scene between 1994 and 1997, playing electric bass in Feeble’s Junky and double bass in Resin Dogs.

At 20, Günsberg started working as a “Black Thunder” driver and did on-air midnight-to-dawn shifts for a B105 radio station in Brisbane, during which time he bore the nickname “Spidey”. He filled in for late-night announcing shifts, before taking on the role of the regular midnight-dawn announcer.

In 1998, he left B105FM to join SAFM for the afternoon shift. It was at SAFM that he adopted the stage name of “Andrew G”, after his program director shortened his surname to its first letter. This change led to confusion between Günsberg and Australian former rugby league footballer for the Brisbane Broncos, Andrew Gee. In 2009, he decided to drop his abbreviated stage name and revert to his full surname.

From 2004 to 2009, he formally hosted the Australian radio chart countdown programme Take 40 Australia, which airs on nearly 100 stations nationwide. For a month in September 2009, he filled in for breakfast radio presenter Kyle Sandilands on 2Day FM’s The Kyle and Jackie O Show along with Dannii Minogue and Brian McFadden. Günsberg finished with Take40 Australia on 29 November 2009.

In December 2009, he launched a re-formatted version of The Hot Hits, bringing the show to live every week around Australia from Los Angeles. The show was re-named The Hot Hits Live from LA. In July 2010, after only six months on the air, the show was nominated for an Australian Commercial Radio Award in the category of “Best Syndicated Program”.

In 2013, Osher Günsberg began releasing “The Osher Günsberg Podcast”, a weekly interview show where he openly discusses and shares his own mental health journey, while having conversations with high profile guests. In 2019, the show’s name changed to “Better Than Yesterday” to reflect the way that the podcast had developed from a straight interview conversation in the early years to a deeper exploration of how his guests overcome life’s challenges. “Better Than Yesterday” is now released on a Monday and Friday in Australia.

In 2019, Osher started a second weekly podcast with Charlie Clausen called “DadPod”. As the two men both became fathers to babies within a month of each other, the show follows their learnings as they “forge a new understanding of what it is to be a modern father and how they helped their partners have the best birth possible.”

In 2003, Günsberg became co-host (with Channel [V] co-star James Mathison) of Australian Idol on Network Ten. For this role, Günsberg was nominated for the Silver Logie in 2004. After Mathison announced that he was moving on to other projects, Günsberg hosted the seventh season of Australian Idol solo in 2009. He was also the compere of Network Ten’s game show The Con Test.

Osher Günsberg appeared on a celebrity episode of the Australian version of Ready Steady Cook in October 2005. As a committed vegan, his recipe ideas were not extremely well received by the audience. According to Günsberg, the audience’s response when he revealed tofu on the menu, was “similar to the look you see on peoples faces when they view two dogs rooting on the side of the road — puzzled, curious, but all together uncomfortable.”

He was one of the co-hosts of the televised Australia Day Eve celebrations on 25 January 2006. In October 2006, he was a contestant on the Australian comedy TV Show, Thank God You’re Here, and played in Celebrity Joker Poker, winning $10,000 for charity. In 2007, he hosted The Con Test. In February 2007, he appeared as himself on the soap opera Neighbours. From 2007–09, he co-hosted the Sydney New Year’s Eve telecast alongside Kim Watkins and Fuzzy. He also served as a creative consultant on the production.

Check Out: Cody Simpson net worth

In 2017, Günsberg made a cameo appearance as himself on episode 4 of Offspring. Günsberg assumed his role as The Bachelor Australia host on Offspring and popped up in a kitchen scene with Nina (played by Asher Keddie). He offered Nina some friendly advice as she hosted a dinner party with her boyfriend Harry (played by Alexander England) and his ex-girlfriend Georgie (played by Emily Barclay). Since 2018, he has been the host of the reality television series Bachelor in Paradise Australia.

In 2012, Günsberg co-hosted the photographic competition show Photo Finish. In 2017, he made a cameo appearance as himself in the first episode of War on Waste.

In August 2017, he revealed he had been suffering from depression for many years, as well as social anxiety disorder and obsessive-compulsive disorder.

His memoir, Back, After the Break, was published by HarperCollins in August 2018. He has been open about his battles with psychosis, alcoholism, and suicidal ideation.

Charity and change of name

In September 2010, Osher Günsberg exhibited a year of daily photographic self-portraits (June 2009 – June 2010) at Mart Gallery in Surry Hills, Sydney, with part of the proceeds going to Lifeline.

At the age of 38, he decided to change his name to ‘Osher’ – Hebrew for ‘happiness’ – in order to signal his changed outlook and attitude toward life. He claims that ‘something about being Osher just feels right. He is an avid cyclist. In October 2016, following criticism for attending Derby Day during the Melbourne Spring Racing Carnival, Günsberg stated “I say that I’m vegan because it’s the quickest way to get the explanation across but the truth is I’ve never really called myself vegan”.

Osher Günsberg is married to Audrey Griffen, they had their wedding in 2016. His second wife Audrey Griffen is a makeup artist. However, Osher was married to Israeli actress and producer Noa Tishby from 2008 and 2011. On 27 December 2011, he announced on Twitter that his marriage to his first wife Noa Tishby was over.

In December 2016, Günsberg married freelance makeup artist Audrey Griffen, becoming a stepfather to her daughter Georgia. The couple met while Osher was filming season two of The Bachelor Australia, where Griffen was working as a makeup artist. Their son, Wolfgang ‘Wolfie’ Günsberg, was born in August 2019. The couple lives with their children in a private house in Sydney.

How much is Osher Günsberg worth? Osher Günsberg net worth is estimated at around $5 million. His main source of income is from his career as a TV/Radio presenter and journalist. Günsberg successful career has earned him some luxurious lifestyles and some fancy cars. He is one of the richest and influential journalists in Australia. However, Simpson starred on Head Above Water as himself which was released on June 4, 2021, in Amazon Prime Video.