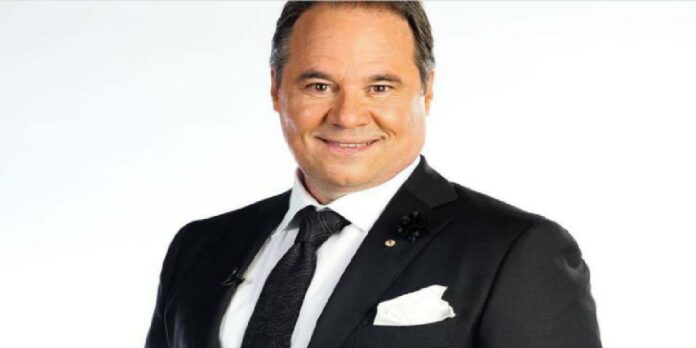 Read the complete write-up of Paul Mercurio net worth, age, height, family, parents, wife, TV shows as well as other information you need to know.

Paul Mercurio is an Australian actor, dancer, and TV presenter. Mercurio is best known for his lead role in Baz Luhrmann’s Strictly Ballroom (1992). His father was the character actor Gus Mercurio.

Paul Joseph Mercurio AM was born on March 31, 1963(age 58 years) in Swan Hill, Victoria. His parents are Gus Mercurio and Jean Mercurio. He began ballet at nine. By the age of 19 in 1982, he was Principal Dancer with the Sydney Dance Company—a position he held for ten years. During this time, he was commissioned to choreograph six works performed by the company. Mercurio left the Sydney Dance Company in August 1992 to found the Australian Choreographic Ensemble which danced from 1992 to 1995, where he was the director, principal dancer and principal choreographer.

Mercurio made his film debut in Strictly Ballroom, receiving an Australian Film Institute Award nomination in 1993. His film credits have included: Exit to Eden, Back of Beyond, Così, Red Ribbon Blues, Welcome to Woop Woop, The Dark Planet, The First 9½ Weeks, Kick and Sydney – A Story of a City. He starred, wrote, choreographed, produced and directed the short film Spilt Milk.

Paul Mercurio made his TV debut in a documentary on his life called Life’s Burning Desire in 1992. He starred in the lead role of Joseph in the Emmy Award-winning US TV mini-series The Bible: Joseph in 1995. Later, he joined the ensemble cast for the 1998 mini-series drama The Day of the Roses, depicting the 1977 Granville railway disaster. Most recently, Mercurio has taken roles in independent films, such as Hunting for Shadows and A Silent Agreement with director Davo Hardy, as well as Promised in 2019.

Mercurio has appeared in Australian shows such as Blue Heelers, All Saints, Murder Call, Medivac, Heartbreak High, Water Rats and The Day of the Roses. Mercurio continues to dance and choreograph professionally. He was a movement consultant on the Will Smith movie I, Robot, and has choreographed an American TV campaign for Coca-Cola, the Harry M. Miller production of Jesus Christ Superstar and Annie Get Your Gun. In January 2004, he appeared on stage in The Full Monty. Mercurio teaches students full-time at Dance World Studios in Melbourne.

Mercurio was a judge on the Australian version of Dancing with the Stars until August 2008, when he was dropped from the judging panel. He was also a judge in the New Zealand version. In 2008, he began hosting a series called Mercurio’s Menu where he travels Australia, cooking in different locations.

Mercurio has completed filming an acting supporting role, as Sal, in the new Australian feature film Promised (2019), directed and co-produced by Nick Conidi. He co-stars with Tina Arena, Antoniette Iesue and Daniel Berini. The film is due for general theatrical release in Australia on 24 October 2019.

How much is Paul Mercurio worth? Paul Mercurio net worth is estimated at around $5 million. He is married to Andrea Mercurio, they have three children together, Elise Mercurio, Erin Mercurio, Emily Mercurio. However, in November 2020, Mercurio was elected as a councillor for Mornington Peninsula Shire.