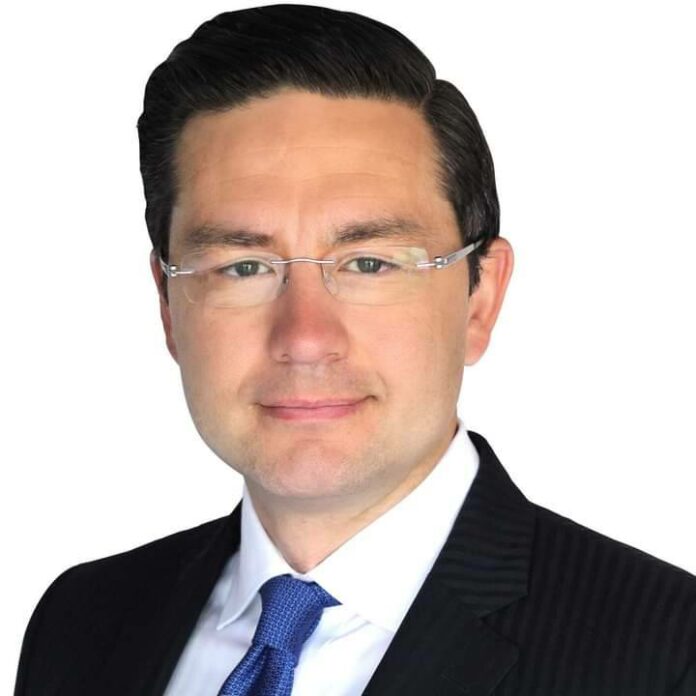 Pierre Poilievre is a Canadian politician who served as Minister for Democratic Reform from 2013 to 2015 and Minister of Employment and Social Development in 2015. He is currently a member of Parliament (MP), representing the suburban Ottawa riding of Carleton and serves as the Opposition critic for jobs and industry, having served as the critic for finance and the National Capital Commission from 2017 to 2021.

A member of the Conservative Party, Poilievre was first elected to the House of Commons in 2004 in the riding of Nepean—Carleton, winning re-election three times. In 2015, Poilievre ran in the re-established riding of Carleton and was re-elected in the same riding in 2019.

Pierre Marcel Poilievre PC MP was born on June 3, 1979(age 42 years) in Calgary, Canada. He was adopted at birth by schoolteachers of Franco-Albertan heritage. His biological maternal grandfather, whom Poilevre first met as an adult, was Irish Canadian. He studied international relations at the University of Calgary, following a period of study in commerce at the same institution. He holds a bachelor of arts degree from the University of Calgary.

Poilievre has done policy work for Canadian Alliance MPs Stockwell Day and Jason Kenney, and prior to running for office himself; worked as a full-time assistant to Day. He also worked for Magna International, focusing on communications, and has done public relations work.

In 1999, writing as Pierre Marcel Poilievre, he contributed an essay, “Building Canada Through Freedom” to the book @Stake—”As Prime Minister, I Would…”, a collection of essays from Magna International’s “As Prime Minister” awards program. In his essay, he argued, among other things, for a two-term limit for all members of Parliament. He did not win the competition. At the time, he was editorially described as being in the second year of a commerce program at the University of Calgary. His self-description was as “a political junkie with a passion for public debating and a special interest in international relations”.

In 2004, Poilievre stood as the Conservative candidate in the riding of Nepean—Carleton. He defeated Liberal Cabinet minister David Pratt by 3,736 votes. In 2006, Poilievre was re-elected with 55% of the vote, beating Liberal candidate Michael Gaffney by 19,401 votes. He has been re-elected in 2008 and 2011 with similar majorities. He was appointed as parliamentary secretary to various ministers including the president of the Treasury Board and the prime minister.

As parliamentary secretary to the Treasury Board president, Poilievre took credit for redrafting Canada’s whistleblower protection laws. and worked with Treasury Board President John Baird to pass the Federal Accountability Act through the House of Commons. The Public Servants Disclosure Protection Act was enacted to provide a process for public sector employees when disclosing abuses and wrongdoings within the federal government and protection of these employees from reprisals. The Federal Accountability Act received Royal Assent on December 12, 2006.

In the summer of 2006, Poilievre and John Baird, the Treasury Board president, helped secure a $1 per year rent for the Queensway Carleton Hospital from the National Capital Commission. Before the brokered agreement, the QCH was paying the NCC $23,000 per year in rent. The lease of the hospital was to expire in 2013, and the rent was set to increase substantially.

Poilievre advocated for the construction of the Strandherd-Armstrong bridge which spans the Rideau River. The eight-lane bridge links Riverside South with Barrhaven. Poilievre secured one-third of the project’s funding and acquired the neighbouring airport land needed to complete the Limebank Road expansion, tapping into funds already committed by former MP David Pratt for transportation projects in this riding.

Construction began on July 27, 2010. The event was locally publicized, with politicians of all levels and parties involved attending the groundbreaking. The bridge was originally scheduled to be completed in 2012, but in 2012 the original contractor, ConCreate USL, went into receivership. The bridge opened in July 2014.

Check Out: Erin O’Toole net worth

Poilievre stated that he didn’t think Canada was “getting value for all this money”, instead “we need to engender the values of hard work and independence and self-reliance.” Poilievre apologized in Parliament the next day, saying, “Mr Speaker, I rise today to offer a full apology to aboriginal people, to the House and to all Canadians. Yesterday, on a day when the House and all Canadians were celebrating a new beginning, I made remarks that were hurtful and wrong. I accept responsibility for them, and I apologize.”

On February 13, 2009, Poilievre stood in the House of Commons to make a statement concerning incidents of alleged anti-Semitism at York University. Poilievre stated his belief that Canadians must address anti-Semitism on college and university campuses.

“Mr Speaker, our Conservative government condemns the latest anti-Semitic outburst at York University. This week, chants of ‘Zionism is racism’ were heard, and one person was called a ‘dirty Jew’.

Sadly, incidents like these have become far too prevalent on college and university campuses across Canada. I am reminded of the violent left-wing mob that shouted anti-Semitic curses at a former Israeli prime minister and prevented him from speaking at Concordia University in 2002.

I fear there is a rise among the extreme left of a new anti-Semitism. We see it in the instances that I mentioned. It lies below the surface of the public discourse waiting, waiting for us to let our guard down, waiting for the outrage to subside, waiting for the right time to flourish. We must confront it, fight it, and defeat it.”

Poilievre was sent by Prime Minister Stephen Harper to Geneva, Switzerland in April 2009 to attend the Conference Against Racism, Discrimination, and Persecution. This conference was held at the same time as the Durban Review Conference, which had been criticized by the prime minister as full of “anti-Semitic rhetoric”. During the same trip, Poilievre travelled to Poland to participate in the International March of the Living Mission, a tour of Nazi concentration camps to commemorate the memory of the victims of the Holocaust.

Poilievre is opposed to a national carbon tax. In May 2009 Poilievre was accused of having insensitively used the term “tar baby” in the House of Commons in reference to a policy of carbon taxation from which Poilievre suggested that Liberal leader Michael Ignatieff would try to distance himself. Poilievre repeated the term later in the same question period.

A number of opposition MPs demanded Poilievre make amends for the use of the term. Poilievre argued that he did not know that the term had racist undertones and was using the term in the sense of its common definition as a sticky and hard to handle the issue. Over the previous years, the term itself had been used by a number of prominent Canadian public figures to indicate a sticky situation.

Poilievre criticized the Public Service Alliance of Canada when it was revealed that the regional sectors of that union endorsed the sovereigntist Parti Québécois in the 2012 Quebec provincial election. Poilievre remarked,

Poilievre has also supported Conservative MP Russ Hiebert’s private members bill C-377, An Act to Amend the Income Tax Act (labour organizations). The legislation advocates for an increased schedule and scope of the disclosure for every Canadian labour union.

Pierre Poilievre introduced Bill C-23, known as the Fair Elections Act, into the House of Commons on February 4, 2014. The bill expanded the types of ID which were accepted in order to vote and eliminated the vouching system, whereby a voter can vote without an ID and have an acquaintance ‘vouch’ for them. The bill was opposed by former-chief electoral officer Jean-Pierre Kingsley, former-auditor general Sheila Fraser, and dozens of Canadian and international political experts — Poilievre stepped up his attacks on Marc Mayrand, the chief electoral officer of Elections Canada at the time, by accusing him of wanting “more power, a bigger budget and less accountability.”

In the same appearance before the Senate Standing Committee on Legal and Constitutional Affairs, Poilievre went on to accuse Mayrand of “fighting to retain this power, making some incredible claims and inventing some novel legal principles to do it.” The bill was passed and has received royal assent.

On October 22, 2014, Poilievre was present at Parliament Hill during the attack on the House of Commons by a terrorist. He, along with the prime minister and many other MPs, barricaded themselves in the Conservative caucus meeting room. He was one of a number of MPs who broke down flag poles and fashioned them into spears to ward off the assailant should he force his way inside. Later, when he and fellow Conservative ministers and MPs met at the Lester B. Pearson Building, Poilievre brought along his spear as a memento.

In July 2015, while acting in his capacity as a Cabinet minister, Poilievre announced an expansion of a child care benefit program. During the announcement, he wore a Conservative Party of Canada shirt, stated that the payments were from “our Conservative government,” and claimed that “if the Liberals and NDP were to take office they would take the benefits away and raise taxes.” Later in 2017, the elections commissioner determined that the occasion was akin to a Conservative party campaign event, rather than a Government of Canada announcement. As the government spent approximately $4,800 related to the event, it was essentially “a de facto non-monetary contribution” to the Conservative party.

Check Out: Peter MacKay net worth

The commissioner ruled that this was a campaign finance violation, as Poilievre had “knowingly circumvent[ed] the prohibition on contributions to a registered party by ineligible contributors.” Poilievre was ordered to post a link to the ruling on his social media.

Poilievre was re-elected in the newly redrawn riding of Carleton in 2015, although his margin ahead of the Liberal candidate was closer than in previous elections, at less than 2000 votes. He was the only Conservative MP elected in the Ottawa area. Conservative Party Leader Andrew Scheer named Poilievre the party’s finance critic as part of its shadow cabinet.

As a member of Parliament, Poilievre has been involved with a variety of charities. For his 30th birthday, Poilievre co-hosted an event with Ottawa Police Chief Vernon White to help raise funds for Harvest House Ministries and Project S.T.E.P. Both charities do work within the greater Ottawa community to treat substance abuse and prevent addiction. In 2005, Poilievre helped raise $40,000 to help rebuild the Manotick legion after it was destroyed by fire in June of that year.

Pierre Poilievre is married to Anaida Galindo, they had their wedding in January 2018 in a beautiful ceremony in Portugal. His wife is a Senate aide. However, on October 17, 2018, the couple welcomed their first child Valentina Alejandra Poilievre Galindo. On June 12, 2021, through his official Instagram page, Pierre and his wife, Anaida, made the announcement that they were expecting their second child along with the help of their daughter, Valentina, through an acute, comic style, post. The couple lives in the Ottawa suburb of Greely, Ontario.

How much is Pierre Poilievre worth? Pierre Poilievre net worth is estimated at around $4 million. His salary is around $190,000. However, he was again re-elected in 2019, with a similar percentage of the vote to his 2015 victory. After Scheer’s resignation as party leader, Poilievre was initially considered to be one of the front runners to win the subsequent leadership election, although he eventually chose not to run. He retained his post as the party’s finance critic in new leader Erin O’Toole’s shadow cabinet. Erin O’Toole moved Poilievre to his present critic responsibility for Jobs and Industry in February 2021, replacing him with Ed Fast.

Amanda Du-Pont Net Worth 2021 in Rands and Dollars

21/11/2021
ABOUT US
Our Motive is to provide reliable, accurate and timely news to you. We're social, connect with us: The Urban and Rural at heart ❤️
Contact us: [email protected]
FOLLOW US
© Apumone 2021 All Rights Reserved