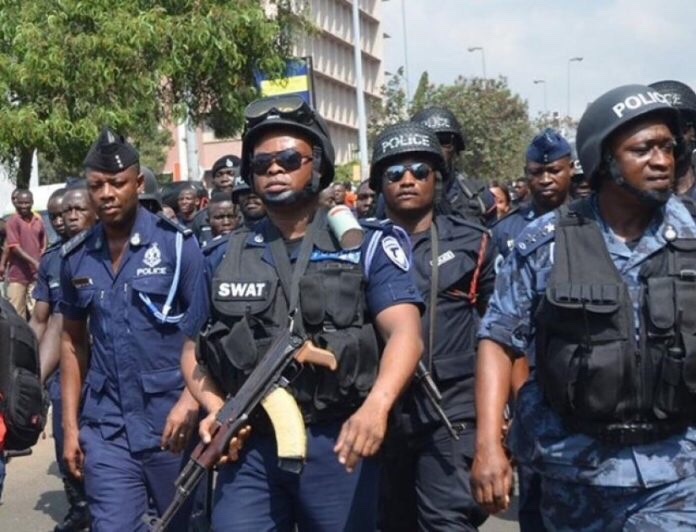 In the wee hours of today, 13th February 2021 Police in Esiama foiled a robbery attempt on Ecobank Esiama branch in the Western Region when they responded to a distress call to the effect that robbers numbering about five had attacked the bank. Police proceeded to the scene where the robbers opened fire upon seeing the Police. Police returned fire, leading the robbers to flee into a nearby bush.

Police rescued a private security man of the bank and another who was on duty at an adjacent ECG office (names of the security men withheld). Their hands had been tied behind them and legs also tied with ropes Police picked one AK 47 assault rifle with tempered serial number and 28 rounds of live ammunition from the direction of the bush where the robbers flee. Other items retrieved include an industrial cutter, crow bar, screw drivers, damaged padlocks and four BB spent shells.

Police observed among others, that the armed robbers damaged the burglar proof and the glass door leading to the banking hall. Although the robbers had access to the banking hall, they did not succeed in their operation due to the timely intervention by Police. Meanwhile a search has been mounted to arrest them and we urge residents of Esiama and surrounding villages to report suspicious characters, especially those who present gun shot wounds to hospitals, clinics and herbalists for treatment.