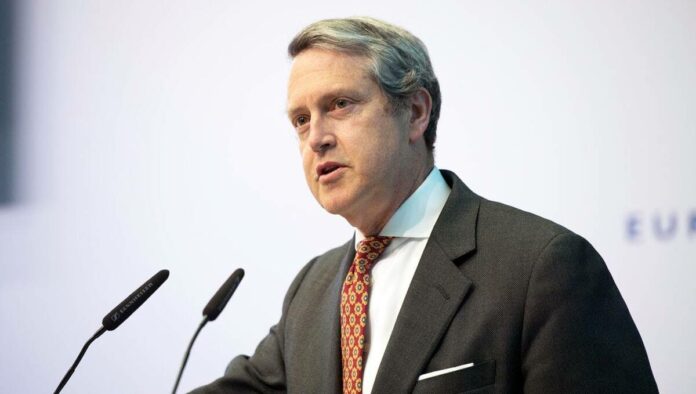 Randal Quarles is an American private equity investor and attorney who served as the First Vice-Chair of the Federal Reserve for supervision from 2017 to 2021. He concurrently served as the chair of the Financial Stability Board from 2018 to 2021. From August 2001 until October 2006, Quarles held several financial policy posts in the George W. Bush administration, ultimately serving as Under Secretary of the Treasury for Domestic Finance.

Quarles became the founder and head of The Cynosure Group, a private investment firm, and a former managing director of The Carlyle Group, one of the world’s largest private equity firms after leaving the Bush administration. In 2012, Quarles was widely mentioned as a possible Treasury Secretary or senior White House adviser in future Republican administrations.

In July 2017, he was nominated by President Donald Trump to be a board member and vice-chair for supervision of the Federal Reserve System. Randal Quarles was confirmed by the United States Senate on October 5, 2017, by a 65–32 vote on the board seat and by voice vote on the vice-chair position. The bank supervision position had been created under the 2010 Dodd-Frank financial law but had never before 2017 been filled. He left the role of Vice-Chair for Supervision in 2021 and retired from the Federal Reserve in 2021.

Randal Quarles was hired as an associate at the Wall Street law firm of Davis Polk & Wardwell upon graduation from Yale. He spent most of his career there in the New York office but also worked in the London office from 1987 to 1989. He specialized in financial institutions law, eventually becoming co-head of the firm’s Financial Institutions Group and advising on transactions that included a number of the largest financial sector mergers ever completed.

In 1990, Nicholas Brady, Treasury Secretary under George H. W. Bush, asked Quarles to join a team working to develop the governmental response to the savings and loan crisis in the financial sector and to propose improvements for the financial regulatory system going forward.

In 2001, Secretary Paul O’Neill asked Randal Quarles to return to the Treasury, where he served until the mid-term elections in 2006. At the Treasury, Quarles was a senior official under all three of George W. Bush’s Treasury Secretaries and developed policy on an unusually broad range of matters in both domestic and international financial affairs.

As Under Secretary, Quarles led the Department’s activities in the financial sector and capital markets policy, including coordination of the President’s Working Group on Financial Markets, development of administration policy on hedge funds and derivatives, regulatory reform of Fannie Mae and Freddie Mac, and proposing fundamental reform of the U.S. financial regulatory structure.

Randal Quarles also was the lead advocate for imposing greater regulation on Fannie Mae and Freddie Mac, arguing that they posed a significant risk to the financial sector, and argued for fundamental reform of the entire financial regulatory system—extending broader and more uniform federal regulation to investment banks and insurance companies—because the current system restricted regulators’ ability to observe and limit risk in the system.

Quarles was Assistant Secretary of the Treasury for International Affairs from April 2002 until August 2005. Quarles had a leading role in issues ranging from Chinese currency policy to the Argentine debt default, and from Iraqi and Afghan economic reconstruction to the reform of collective action in sovereign debt agreements.

In addition, Quarles was the policy chair of the Committee on Foreign Investment in the United States, which reviews potential investments that raise national security issues and negotiated the historic debt relief agreement for the world’s poorest countries reached at the G7 meetings in London in 2005. From August 2001 until April 2002, Quarles was the U.S. Executive Director of the International Monetary Fund, where he represented the United States in negotiations over the IMF’s response to financial crises in Argentina and Turkey.

In his earlier positions in the administration, he had a key role in response to several international crises—the Argentine debt default, as well as near defaults in Brazil, Turkey and Uruguay—and chaired the international working group that led to changes in the terms of sovereign debt finance that now permit collective action by creditors in such crises.

He also argued strongly for improving international coordination of financial regulation, initiating a regular dialogue with the European Union on financial regulatory matters, and representing the United States at the Financial Stability Forum. He negotiated the historic debt relief agreement for the world’s poorest countries reached at the G7 Meetings in London in 2005.

At the time of his departure from government, Hank Paulson, the Treasury Secretary, noted that he had played a role in an unusually large range of matters in the history of the Treasury – “from the Argentine debt default to terrorism risk insurance, and from Chinese currency flexibility to GSE reform”, and awarded him the Alexander Hamilton Medal, the Treasury Department’s highest honor.

After Randal Quarles’s departure from the Treasury, he joined the Carlyle Group, a leading private equity firm, to help the firm develop a focus on transactions in the financial services sector. After his departure from Carlyle, Quarles led the Cynosure Group which manages the money of the Eccles family (Quarles’s wife’s family) among others.

The Eccles family forebears included David Eccles (1849–1912), who emigrated from Scotland sailing on the Cynosure and subsequently became a successful businessman and Utah’s first multimillionaire, and his son Marriner Stoddard Eccles (1890–1977), who was a U.S. banker, economist, and Chairman of the Federal Reserve. The Eccles Building which houses the headquarters of the Federal Reserve in Washington, D.C. is named after Marriner Eccles.

Randal Quarles was nominated on July 10, 2017, by President Donald Trump to fill a vacant position on the Federal Reserve Board of Governors expiring January 31, 2018, a new 14-year term expiring January 31, 2032, and also the position of Vice-Chair of the Federal Reserve for Supervision. The position of Vice Chairman for Supervision had previously remained unfilled since its creation under the Dodd-Frank Act in 2010.

Quarles was confirmed by the United States Senate on October 5, 2017, for the vacant seat expiring early in 2018 by a vote of 65–32, as well as for the position of Vice Chairman for Supervision by a voice vote. However, the Senate did not vote on his nomination to the seat expiring in 2032, but instead returned his nomination to the President at the end of the first session of the 115th Congress, per Senate rule XXXI, Section 6. He continued to serve on the Board as an acting member pending his renomination on January 8, 2018, and ultimate confirmation on July 17, 2018, by a vote of 66–33.

Randal Quarles is married to Hope Eccles, they had their wedding in the 1990s. His wife is the daughter of Utah businessman Spencer Eccles, whose father, Spencer Stoddard Eccles, was the brother of Marriner S. Eccles. Quarles is a member of The Church of Jesus Christ of Latter-day Saints. In November 2017, an investigation conducted by the International Consortium of Investigative Journalists cited his name in the list of politicians named in the “Paradise Papers” documents. As of 2022, Quarles and his wife Hope reside in California.

How much is Randal Quarles worth? Randal Quarles net worth is estimated at around $50 million. His main source of income is from his career as a private equity investor and former attorney. Quarles salary and other earnings are over $5.5 million annually. His successful career has earned him some luxurious lifestyles and some fancy car trips. He is one of the richest and influential private equity investors in the United States.