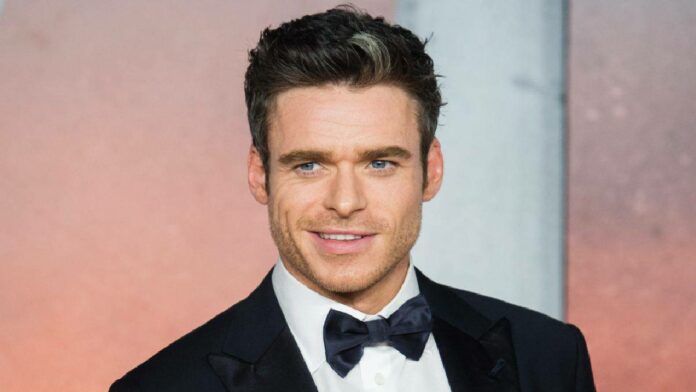 Richard Madden is a Scottish actor. He was cast in his first role at age 11 and made his screen acting debut in 2000. He later began performing on stage whilst a student at the Royal Conservatoire of Scotland. In 2007, he toured with Shakespeare’s Globe company as Romeo in Romeo and Juliet, a role he reprised in the West End in 2016. Madden rose to fame with his portrayal of Robb Stark in the fantasy drama series Game of Thrones from 2011 to 2013.

After his work on Game of Thrones, Madden played Prince Kit in the romantic fantasy film Cinderella (2015) and Italian banker Cosimo de’ Medici in the first season of the historical fiction series Medici (2016). In 2018, he gained acclaim for his performance as a police officer in the thriller series Bodyguard, for which he won a Golden Globe Award. In addition to starring as music manager John Reid in the biopic Rocketman and a soldier in the epic war film 1917, Madden was named one of the 100 most influential people in the world by Time the following year. He starred as Ikaris in the Marvel Cinematic Universe superhero film Eternals (2021).

Richard Madden was born on June 18, 1986 (age 35 years) in Elderslie, outside the city of Glasgow, Scotland. He grew up alongside his two sisters Cara Madden and Lauren Madden. His mother Pat Madden is a primary school teacher, and his father Richard Madden worked as a firefighter.

Richard Madden joined PACE Youth Theatre at age 11 to help overcome his shyness. He was cast in his first role as young Andy in a film adaptation of Iain Banks’s Complicity, which was released in 2000. Next, he played the lead role of Sebastian in the children’s television series Barmy Aunt Boomerang, which aired from 1999 until 2000. In addition to being shy, Madden struggled with body insecurities as a child. He later stated that he also experienced bullying, especially in high school, which he attributed to his role in Complicity.

Madden attended the Royal Conservatoire of Scotland, formerly the Royal Scottish Academy of Music and Drama, in Glasgow, graduating in 2007. He worked with The Arches and the Glasgow Repertory Company during his studies; he also performed in Franz Xaver Kroetz’s play Tom Fool at the Citizens Theatre. After receiving positive reviews, the Tom Fool production transferred to London, where Madden was spotted by a team from Shakespeare’s Globe. In his final year at the conservatoire, he was cast as Romeo in the play Romeo and Juliet at the modern Globe Theatre in London, followed by a tour of the production during the summer of 2007. In her review, Susan Elkin of The Stage deemed the actor’s portrayal of Romeo “gravelly Glaswegian” and “almost childlike”.

Check Out: Tom Holland net worth

He played Callum McGregor in the Royal Shakespeare Company’s production of Malorie Blackman’s Noughts & Crosses, which ran from December 2007 to February 2008. He then starred as Mark McNulty in the National Theatre of Scotland’s production of the play Be Near Me in 2009, which The Times’s Benedict Nightingale described as a “skillful adaptation” of the Andrew O’Hagan novel of the same name.

Susan Mansfield of The Scotsman wrote that Richard Madden had caught critics’ attention, reporting additional positive reviews of his performances by The Daily Telegraph and The Observer. He later gained the lead role of Dean McKenzie in the 2009 BBC comedy-drama series Hope Springs, followed by his respective roles as Ripley and Theatre of Hate singer Kirk Brandon in the 2010 films Chatroom and Worried About the Boy.

Richard Madden starred as Robb Stark in the HBO fantasy drama series Game of Thrones, based upon the series of novels titled A Song of Ice and Fire by George R. R. Martin, from 2011 to 2013. His work as Stark propelled him to prominence. Madden later spoke about being broke and even contemplating moving back in with his parents prior to his casting.

Throughout Madden’s time on the series, the ensemble cast garnered Screen Actors Guild Awards nominations for Outstanding Performance by an Ensemble in a Drama Series in 2011 and 2013. During this period, he also appeared in the Channel 4 comedy-drama series Sirens and the BBC drama series Birdsong. Madden first obtained his Screen Actors Guild (SAG) card for the 2014 miniseries Klondike, in which he played Bill Haskell, a real-life adventurer who participated in the Klondike Gold Rush.

Richard Madden portrayed Prince Kit in Cinderella, a romantic fantasy film, and the live-action adaptation of the animated film of the same name. While terrified of playing a classical fairy tale character, the actor found comfort in how audiences knew very little about the prince in the animated film and how he was able to create “a real young man.” Released in March 2015, Cinderella was a critical and commercial success, grossing over $542 million.

Madden starred as Romeo in a West End production of Romeo and Juliet, which opened at the Garrick Theatre on 25 May, reuniting with his Cinderella co-star Lily James, who starred as Juliet, and director Kenneth Branagh. Michael Billington of The Guardian praised Madden’s articulation of Romeo’s “challenge to fate”, while Variety’s Matt Trueman criticized his speeches as “flat and regimented”. He departed the production in July after suffering an ankle injury.

In 2016, Madden appeared as an American pickpocket in the thriller film Bastille Day. He played the lead role of Cosimo de’ Medici, a member of the House of Medici banking family during the Italian Renaissance, in the first season of the Italian-British television drama series Medici, subtitled Masters of Florence, which aired that same year. In 2017, he appeared in the first episode of Electric Dreams, an anthology series based on Philip K. Dick’s works.

Writing for Digital Spy, Alex Mullane found the actor “particularly dashing” and added that his performance made the twist in the story “brutally effective”. Madden next played a DJ in the Netflix romantic comedy film Ibiza, embodying the part with hints of goofiness and loneliness. In her review for The Daily Telegraph, Lucy Jones deemed him a “fine and believable romantic lead.”

Richard Madden garnered acclaim and recognition for playing Sergeant David Budd, a war veteran, and a police officer with post-traumatic stress disorder (PTSD), in the 2018 BBC thriller series Bodyguard. He spoke to members of the armed forces who had experienced PTSD to frame a complex and intricate representation of the disorder. Tim Goodman of The Hollywood Reporter wrote that the actor executed the role with self-possession.

While The Atlantic’s Sophie Gilbert observed that he conveyed Budd’s “superb instincts, his cool head under fire, and his complex psyche” successfully. After the series finale became the most-watched UK television drama episode since the beginning of current records, Netflix released Bodyguard worldwide in October 2018. Madden’s performance earned him the Golden Globe Award for Best Actor – Television Series Drama.

Madden portrayed music manager John Reid in the Elton John biopic Rocketman in 2019, which was released in May, and appeared as a World War I soldier in Sam Mendes’ war film 1917, which was released in December. Both films garnered positive reviews and became box office successes. From December 2020 to January 2021, he starred in the science fiction podcast series From Now, voicing a survivor of a spaceship that returns 35 years after vanishing.

He starred as Ikaris in the Marvel Cinematic Universe superhero film Eternals, directed by Chloé Zhao. Released in November 2021, the film garnered mixed responses from critics and audiences. Madden is set to play a lead role in Citadel, an Amazon Studios series created by Anthony and Joe Russo. He is slated to executive produce a television series adaptation of From Now.

Richard Madden is currently single and not married. His girlfriend or wife-to-be is unknown to the general public. However, in an interview with British Vogue, Madden expressed pride in coming from a working-class background and said that his social conscience is sparked by inequality in education and the lack of creative opportunities for working-class children in schools. As of May 2019, he splits his time between his residence in London and Los Angeles. In July 2019, Madden received an honorary doctorate from his alma mater, the Royal Conservatoire of Scotland. When asked about his personal life during a New York Times interview following speculation about his relationships and sexuality, Madden stated: “I just keep my personal life personal.”

How much is Richard Madden worth? Richard Madden is estimated at around $10 million. His main source of income is from his career as an actor. Madden successful career has earned him some of the luxurious lifestyles and some of the fancy cars trips. He is one of the richest and influential people in the United Kingdom. However, in 2019, Richard Madden was featured on the Time 100, an annual list of the 100 most influential people in the world compiled by Time magazine. He was also recognised with the GQ Men of the Year Award for Hugo Boss Most Stylish Man that same year.

Kanye West and Jay-Z Have Same Number Of Awards At The...

19/03/2021
ABOUT US
Our Motive is to provide reliable, accurate and informative news to you. The Urban and Rural at heart ❤️
Contact us: [email protected]
FOLLOW US
© Apumone 2022 All Rights Reserved
Go to mobile version