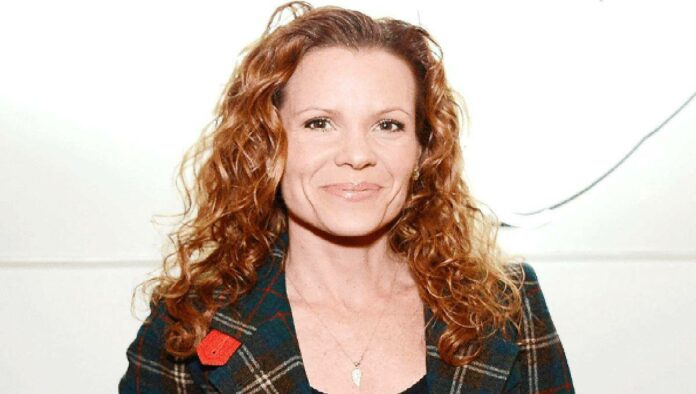 Robyn Lively is an American actress. She is known for her role in the film Teen Witch (1989) and for her roles in the TV shows Doogie Howser, M.D.; Twin Peaks; Savannah; and Saving Grace.

Robyn Elaine Lively Johnson was born on February 7, 1972 (age 50 years) in Georgia, United States. She grew up in a family of actors in Powder Springs, Georgia; her mother, adoptive father, and all four siblings are (or have been) in the entertainment industry. She is the daughter of talent manager Elaine Lively McAlpin and her first husband Ronald Otis Ronnie Lively. Her siblings are sister Lori and brother Jason, and her half-siblings are Eric and Blake.

Robyn Lively began her career as a child actress: at age six, she made her screen debut in the television movie Summer of My German Soldier in 1978. Throughout the 1980s, she appeared in several television shows including Silver Spoons, Punky Brewster and Starman.

Lively appeared in the feature films Wildcats, The Karate Kid Part III, Teen Witch, and Not Quite Human. After she was cast as Jessica Andrews in The Karate Kid Part III in 1989, producers were forced to modify her role of protagonist Daniel LaRusso’s new love interest because Lively was only 16 at the time of filming and still a minor while Ralph Macchio was 27 (although his character Daniel is 17). This situation caused romantic scenes between Jessica and Daniel to be rewritten so that the pair only developed a close friendship.

Lively was nominated for an Emmy Award at 19 for her performance as an insecure teen in the 1991 ABC Afterschool Special episode “Less Than Perfect Daughter”. In the 1990s she had recurring roles on Twin Peaks, Doogie Howser, M.D., and Chicago Hope.

In 1996 Robyn Lively appeared as Lane McKenzie, one of three lead characters in the short-lived WB drama Savannah. In 2003 Lively played NCIS Special Agent Vivian Blackadder in the JAG episodes “Ice Queen” and “Meltdown” (the backdoor pilot for NCIS).

Check Out: Blake Lively net worth

Lively starred in the thriller Through the Glass Darkly in 2020 which premiered at the Frameline Film Festival on September 19, 2020.

Robyn Lively is married to Bart Johnson, they had their wedding on September 25, 1999. Her husband is an actor who is best known for his role as Coach Jack Bolton in the High School Musical film series. Robyn Lively’s husband Bart Johnson was exposed to the TV and film industry at a young age and began his career in the mid-1990s. His film debut was My Family in 1995. The couple has three children: Baylen, Kate, and Wyatt Blake. The family resides in Hollywood Hills.

How much is Robyn Lively worth? Robyn Lively net worth is estimated at around $4 million. Her main source of income is from her career as an actress. Lively successful career has earned her some luxurious lifestyles and some fancy cars trips. She is one of the richest and influential actresses in the United States.