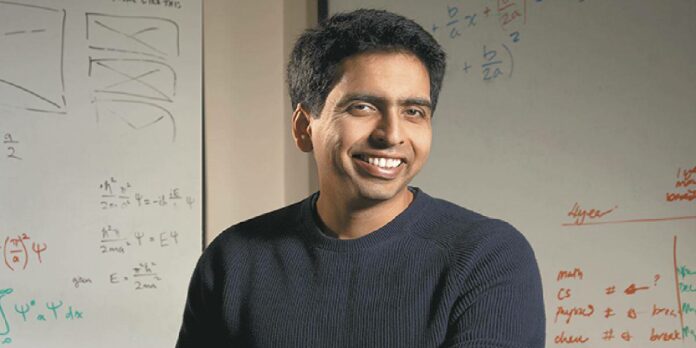 Sal Khan is a Bangladeshi American educator and the founder of Khan Academy, a free online education platform and an organization with which he has produced over 6,500 video lessons teaching a wide spectrum of academic subjects, originally focusing on mathematics and sciences. He is also the founder of Khan Lab School, a brick-and-mortar school associated with Khan Academy.

In 2012, Time named Khan in its annual list of the 100 most influential people in the world. In the same year, Forbes magazine featured Khan on its cover, with the story “$1 Trillion Opportunity”.

Salman Amin Khan was born on October 11, 1976 (age 45 years) in Metairie, Louisiana, United States. He is the son of a Bengali Muslim family. His father Fakhrul Amin Khan is from Barisal, Bangladesh, and his mother Masuda Khan is from Murshidabad in West Bengal, India. He attended Grace King High School, where, as he recalls, “a few classmates were fresh out of jail and others were bound for top universities.”

Khan also worked as a cartoonist for the high school’s newspaper. Khan took upper-level mathematics courses at the University of New Orleans while he was in high school and graduated valedictorian in 1994.

He attended the Massachusetts Institute of Technology (MIT), graduating with Bachelor of Science and Master of Science degrees in Course 6 (electrical engineering and computer science), and another bachelor’s degree in Course 18 (mathematics), in 1998. In his final year, Sal was the president of the “Senior Gift Committee,” a philanthropy program of the graduating class.

Sal Khan was a summer intern at PARC in 2002. From 2003 to late 2009, Khan worked as a hedge fund analyst at Connective Capital Management.

In 2004, Khan began tutoring his cousin, Nadia, in mathematics over the internet using Yahoo!’s Doodle notepad. When other relatives and friends sought his tutoring, he moved his tutorials to YouTube, where he created an account on November 16, 2006.

The popularity of his educational videos on the video-sharing website prompted Khan to quit his job as a financial analyst in late 2009. He moved his focus to develop his YouTube channel, Khan Academy, full-time with the aid of close friend Josh Gefner. Khan subsequently received sponsorship from Ann Doerr, the wife of John Doerr.

His videos received worldwide interest from both students and non-students, with more than 458 million views in the first number of years.

Khan outlined his mission to “accelerate learning for students of all ages. With this in mind, we want to share our content with whoever may find it useful.” Khan plans to extend the “free school” to cover topics such as English literature.

Check Out: Eddie Woo net worth

Khan Academy, initially a tool for students, added the Coach feature in 2012, promoting the connection of teachers with students through videos and monitor tools. In 2012, Khan received the American Academy of Achievement’s Gold Medal. In 2014, Khan received the 19th Annual Heinz Award in the Human Condition category.

In 2015, Khan announced that Khan Academy was partnering with the College Board to create free practice resources for the SAT test.

Sal Khan believes that supplementing traditional classroom education with the technology being developed by his Academy can improve the effectiveness of teachers by freeing them from traditional lectures and giving them more time for instruction specific to individual students’ needs.

Stanford AI researcher Andrew Ng has named Khan as a huge inspiration for the founding of Coursera, one of the first massive open online course (MOOC) platforms.

In 2020, Khan launched Schoolhouse. world, a free non-profit initiative to provide small-group tutoring for students across the world. The service uses the taxonomy of the Khan Academy to organize its online video conferencing tutorials. The initial pilot was conducted in partnership with the Long Beach Unified School District.

In 2016, Salman received India’s fourth-highest civilian award, Padma Shri, from the President of India. On May 27, 2021, Salman received the honorary Doctor of Laws degree from Harvard University.

Sal Khan is married to his longtime girlfriend Umaima Marvi, they had their wedding in 204 in a private ceremony. His wife Umaima Marvi is a Pakistani physician. The couple lives with their children in a private house in Mountain View, California. However, in 2020, Khan Academy’s videos on YouTube had been viewed over 1.8 billion times.

How much is Sal Khan worth? Sal Khan net worth is estimated at around $350 million. His main source of income is from his career as an educator and businessman. Khan successful career has earned him some luxurious lifestyles and some fancy cars trips. He is one of the richest and influential educators in the United States. However, as of December 2021, the Khan Academy channel on YouTube has 7.02 million subscribers and Khan Academy videos have been viewed more than 1.92 billion times.