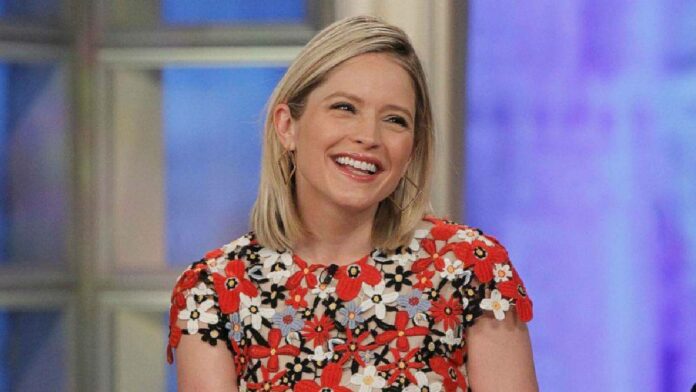 Sara Haines is an American television host and journalist. She is known as a co-host of the ABC daytime talk shows The View and Strahan, Sara and Keke, and the game show The Chase. She has also worked as a correspondent on Today, ABC News, and Good Morning America.

Sara Hilary Haines was born September 18, 1977 (age 44 years) in Newton, Iowa, and raised there with her three siblings. She attended Smith College in Northampton, Massachusetts, where she received a Bachelor of Arts degree in government in 2000. At Smith, Haines played basketball and volleyball.

Sara Haines began her career in the NBC Page Program. After nine months in the program, she became the production coordinator for NBC’s Today at Rockefeller Center in 2002. In 2009, Haines became the show’s fourth hour’s contributing correspondent until departing in 2013.

In 2013, Haines became an ABC News correspondent as well as the pop news anchor for the weekend editions of Good Morning America. After multiple appearances as a guest co-host, Haines joined The View as a permanent co-host in the show’s 20th season, which premiered on September 6, 2016.

On July 23, 2018, ABC announced that she would not return to The View for season 22 and that she would co-host GMA Day, later renamed Strahan and Sara, with Michael Strahan. Haines made her final appearance as a co-host during the 21st season’s penultimate episode on August 2.

Check Out: Sean Gilmartin net worth

Haines’s debuted as co-host of GMA Day during the series premiere on September 10, 2018. In August 2019, the program was renamed GMA3: Strahan, Sara, and Keke, with the addition of Keke Palmer as a third co-host. Sara Haines returned to The View as a frequent guest co-host in 2020. Following the reformatting of GMA3 that same year, Haines permanently returned to The View for its 24th season.

In November 2020, it was reported that Haines would host a revival of The Chase on ABC. The series premiered in January 2021. She made an appearance as herself in the second episode of the Disney+ superhero series The Falcon and the Winter Soldier, interviewing the character John Walker about his role as the new Captain America.

Sara Haines is married to her longtime boyfriend attorney Max Shifrin, they had their wedding in November 2014. The couple resides in New Jersey. Their first child, Alec Richard Shifrin, was born in March 2016, followed by their second, Sandra Grace Shifrin, in December 2017, and their third, Caleb Joseph Shifrin, in June 2019. Despite growing up in what she describes as an “extremely conservative household”, Haines identifies as a “slightly left-leaning moderate”.

How much is Sara Haines worth? Sara Haines’s net worth is estimated at around $8 million. Her main source of income is from her career as a television host and journalist. Haines’s successful career has earned her some luxurious lifestyles and some fancy cars trips. She is one of the richest and most influential actresses in the United States.

21/02/2022
Read the complete write-up of Zodwa Wabantu net worth, biography, age, height as well as other information you need to know. Introduction Zodwa Wabantu is a...

06/07/2021
ABOUT US
Our Motive is to provide reliable, accurate and informative news to you. The Urban and Rural at heart ❤️
Contact us: [email protected]
FOLLOW US
© Apumone 2022 All Rights Reserved
Go to mobile version