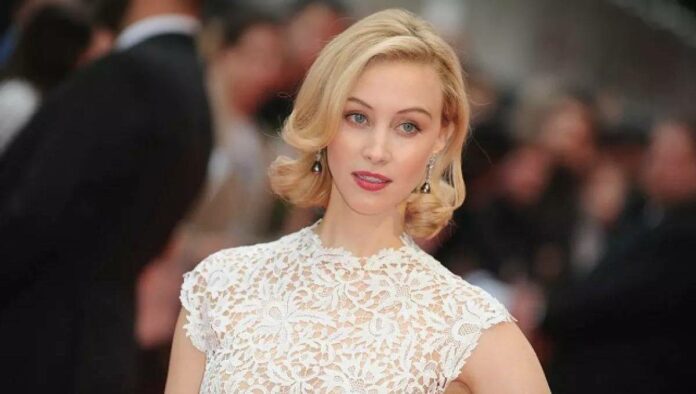 Sarah Gadon is a Canadian actress. She began her acting career guest-starring in a number of television series, such as Are You Afraid of the Dark? (1999), Mutant X (2002), and Dark Oracle (2004). She also worked as a voice actress on various television productions. Gadon gained recognition for her roles in David Cronenberg’s films A Dangerous Method (2011), Cosmopolis (2012), and Maps to the Stars (2014).

Gadon also starred in Denis Villeneuve’s thriller Enemy (2013), the period drama Belle (2013), and the action-horror film Dracula Untold (2014). In 2015, Gadon co-starred in the supernatural thriller The 9th Life of Louis Drax and portrayed a young Elizabeth II in the comedy A Royal Night Out. The following year, she starred as Sadie Dunhill in the Hulu miniseries 11.22.63, an adaptation of Stephen King’s novel 11/22/63.

In 2017, Gadon played the lead role of Grace Marks in the CBC miniseries Alias Grace, which is based on the Margaret Atwood novel of the same name, and joined the cast of the Crave sitcom Letterkenny in its third season. The following year, she had a leading role in the period drama The Great Darkened Days. In 2019, Gadon starred in the third season of the HBO anthology series True Detective.

Sarah Lynn Gadon was born on April 4, 1987 (age 35 years) in Toronto, Ontario, Canada. She is the daughter of a psychologist father and a teacher mother. She has an older brother named James Gadon. Sarah has English and Italian ancestry. She spent much of her childhood and adolescence training and performing as a dancer, with time spent as a Junior Associate at The National Ballet School of Canada and as a student at the Claude Watson School for the Performing Arts. She graduated high school as an Ontario Scholar from Vaughan Road Academy in 2005. By 2014, she had completed her studies at the University of Toronto’s Cinema Studies Institute at Innis College.

Sarah Gadon started acting at the age of 11 with her first acting role as Julia in an episode of La Femme Nikita (1998). For the next few years, she took episodic roles in various television series, including Monica in Are You Afraid of the Dark? (1999), Young Laura Burnham in Twice in a Lifetime (2000), Catherine Hartman in Mutant X (2002), Claudia in Dark Oracle in 2004, Vicki in Life with Derek (2005), and Tasha Redford in Flashpoint (2008).

Gadon also has a number of television films to her credit. She was nominated for the Young Artist Award for Best Ensemble in a TV movie for her first film, The Other Me (2000), portraying Heather. Other roles include Sarah in Phantom of the Megaplex (2000), Samantha in What Girls Learn (2001), Amanda in Cadet Kelly (2002), Julia Norton in Code Breakers (2005) and Celeste Mercier in The Cutting Edge: Chasing the Dream (2008).

In 2005, Sarah Gadon filmed for Where Love Reigns, a promotional film co-starring Douglas Henshall. Her filmography includes both feature length and short films. Her first feature film was Fast Food High (2003) where she portrayed Zoe. She portrayed Margaret in the dark comedy Siblings, Priscilla in Charlie Bartlett (2007) and Laura in Leslie, My Name is Evil (2009).

Her short film work includes Haley in Burgeon and Fade (2007), Julia in Grange Avenue (2008) and Gabrielle in Spoliation (2008). Burgeon and Fade won the Special Jury Award at the WorldFest Houston Festival for an original dramatic short film. She also starred in the short indie film, The Origin of Teddy Bears, as Madison.

Sarah Gadon starred in David Cronenberg’s Cosmopolis, alongside Robert Pattinson, as his on-screen wife of 22 days, Elise Shifirin in 2011. She played Phillippa in the television adaptation of Ken Follett’s bestseller World Without End, an eight-hour event series. She featured in Brandon Cronenberg’s debut feature, Antiviral as Hannah Geist, a mega-star in a sci-fi world where fans pay to be infected with the diseases of the rich and famous.

Gadon appeared as Carl Jung’s wife Emma in the David Cronenberg film A Dangerous Method and in a Canadian short film, Yellow Fish, alongside J. Adam Brown in 2012. On May 23, 2012, in Cannes, Birks presented the first Birks Canadian Diamond award to Gadon and Emily Hampshire during Telefilm Canada’s inaugural Tribute To Canadian Talent press event and reception.

She played Miss Elizabeth Murray in the 2013 release of the film Belle. She co-starred in Denis Villeneuve’s Enemy (2013), based on the José Saramago book, The Double (2002), and in David Cronenberg’s Maps to the Stars (2014), a darkly comic look at Hollywood excess.

Sarah Gadon participated in the CBC “Canada Reads” competition in March 2014. In September 2014, it was announced that she was cast in Miramax’s supernatural thriller The 9th Life of Louis Drax, along with Jamie Dornan and Aaron Paul. The film was released in September 2016. Gadon played Dracula’s wife Mirena (and briefly the modern-day Mina) in the historical action film Dracula Untold, released in October 2014.

Gadon made her directorial debut with an episode of Reelside, a documentary series, which focused on her collaborative relationship with photographer Caitlin Cronenberg; the episode premiered on The Movie Network in Canada on June 4, 2015. In 2015, Gadon appeared as Princess Elizabeth in A Royal Night Out, a heavily fictionalized account of the future Queen’s incognito night on the town, along with her sister Princess Margaret, on the evening of VE Day.

Check Out: Stana Katic net worth

In 2016, Sarah Gadon starred opposite Logan Lerman in Indignation, an adaptation of Philip Roth’s 2008 novel of the same title, and opposite James Franco in 11.22.63, a television mini-series version of Stephen King’s novel of the same title. In 2017, Gadon played the lead role in the CBC miniseries Alias Grace, which is based on the Margaret Atwood novel of the same name. For her performance, she won her second Canadian Screen Award. In 2019, she starred in the third season of the HBO anthology series True Detective.

In 2021, Sarah Gadon starred in the film All My Puny Sorrows with Alison Pill, as two Mennonite sisters who leave their religious lives behind. She won Best Supporting Actress in a Canadian Film from the Vancouver Film Critics Circle Awards for her role in the movie.

Sarah Gadon is currently not married. She was in a relationship with film editor and director Matthew Hannam. However, in a January 2019 joint interview, the pair explained that their shared experience of temporary stays in foreign cities as part of the trigger for the short film Paseo, the first film in which Hannam directed Gadon. As of April 2022, her husband or boyfriend is unknown to the general public and she has no children.

How much is Sarah Gadon worth? Sarah Gadon net worth is estimated at around $3 million. Her main source of income is from her career as an actress. Gadon successful career earned her some luxurious lifestyles and some fancy cars trips. She is one of the richest and influential actresses in Canada. However, Gadon has received numerous accolades, including three Canadian Screen Awards for Alias Grace, Enemy, and The Great Darkened Days. In 2016, she earned the Award of Excellence from the Alliance of Canadian Cinema, Television, and Radio Artists (ACTRA).

17/01/2022
ABOUT US
Our Motive is to provide reliable, accurate and informative news to you. The Urban and Rural at heart ❤️
Contact us: [email protected]
FOLLOW US
© Apumone 2022 All Rights Reserved
Go to mobile version