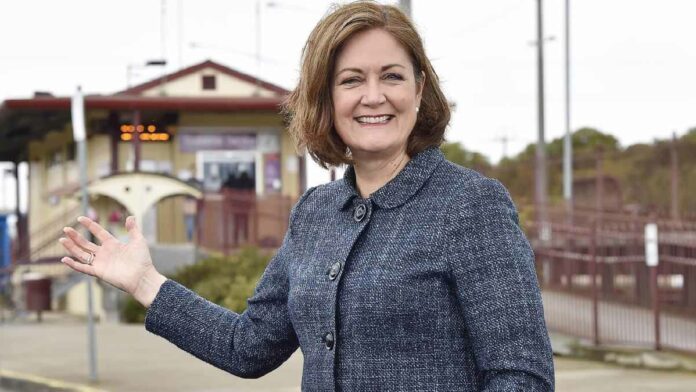 Sarah Henderson is an Australian politician, lawyer and former journalist. She has been a Senator for Victoria since September 2019, representing the Liberal Party. She previously held the Division of Corangamite in the House of Representatives from 2013 to 2019.

Sarah Moya Henderson was born on April 4, 1964 (age 57 years) in Geelong, Australia. She is the daughter of Ann Henderson and Michael Henderson. She was educated at Sacred Heart College before moving to The Geelong College, where she graduated in 1981. Her mother Ann Henderson, was a member of Geelong in the Victorian state parliament, from 1992 to 1999. She has two siblings Andrew Henderson and Jodie Henderson.

Sarah Henderson became a cadet reporter with Channel 7 in Melbourne in 1982. She went on to work with Channel 9 in Brisbane and then Channel 10 in Melbourne, where she presented the weekend news with Alister Paterson. She moved to ABC-TV where she worked as a presenter of the consumer advocacy program The Investigators.

Henderson’s media career included working as a presenter of the ABC’s Holiday program (1992–1993) and Australia’s Most Wanted in 1994, and she was the Victorian presenter of The 7.30 Report in 1995. When The 7.30 Report became a national program in 1996, she continued working as the program’s law correspondent and was also awarded a Walkley Award for her coverage of the Port Arthur massacre.

In 1998, she obtained a Bachelor of Laws degree from Monash University and moved to a career in law with the Melbourne firm Arthur Robinson & Hedderwicks. She worked as an attorney for News Corporation and was a weekly columnist with the Herald Sun newspaper from 2002 to 2004. At the same time she established the Kudos Management Group which led to business management roles with Network Ten and National Indigenous Television. In 2003, Henderson hosted the Ethnic Business Awards, which is a national business award highlighting migrant and Indigenous excellence in business.

Sarah Henderson was chosen as the Liberal Party candidate for the federal seat of Corangamite in 2009 but was defeated by ALP incumbent Darren Cheeseman in the 2010 election. She was preselected again as the Liberal Party’s candidate for Corangamite at the 2013 federal election and won the seat with a 4.6-point swing. Ahead of the 2019 election, a redistribution erased Henderson’s majority and made Corangamite marginally Labor.

Henderson sought another term in 2019 but was defeated by her 2016 opponent, Libby Coker. On 26 May 2019, Victorian Senator Mitch Fifield chose to accept a position as the Permanent Australian Representative in the United Nations, leaving the possibility that the Liberal Party would choose Henderson to fill the casual vacancy caused by Fifield’s eventual resignation to accept the role. On 8 September, Henderson defeated Greg Mirabella in the preselection ballot 234 votes to 197. She was appointed to the Senate by a joint sitting of the Parliament of Victoria on 11 September 2019.

Sarah Henderson has generally taken pro-environment positions and has advocated for measures to tackle climate change and increase the uptake of renewable energy, positions that run contrary to many within the Liberal Party. During her 2016 Federal Election campaign, she identified the environment as one of her key issues. In 2017, she sold off her shareholdings.

Henderson campaigned strongly against coal-seam gas mining (fracking) in Victoria’s south-west as well as against a planned drilling campaign in the Great Australian Bight as a member of Corangamite. However, following losing her seat at the 2019 Federal Election and being appointed to fill a casual senate vacancy, she urged Victorian Premier Daniel Andrews to lift the moratorium on conventional on-shore gas mining, saying to the Senate “Victoria is at a tipping point, facing blackouts over summer, with now the highest electricity prices in the nation. We need more dispatchable power – taking gas out of the Otway Basin onshore, as the state permits offshore, is desperately required.”

She had taken a more rightward shift on the issue of climate change describing local MPs in the Geelong region as “climate action zealots” while also coming out in support of coal mining and gas. Henderson has made calls for the strengthening of foreign investment rules, and opposes foreign ownership of vital assets, saying that “Australia’s critical infrastructure assets, such as airports, power stations, data networks, communications infrastructure and ports – including the Port of Darwin – should simply not be falling into foreign hands.”

Henderson supports a review into the allocation of water permits in the Murray-Darling Basin. “We must always ask what more we can do – whether it be a serious review of environmental water allocations for the Murray or new water trading rules to combat the corporate water hoarders and price takers.” Henderson also supports the construction of new dams, saying water “storage infrastructure is vital and in contrast to the NSW Government, the Victorian Government was refusing to greenlight any new dam”.

Sarah Henderson opposes the transfer of asylum seekers to Australia on medical grounds. On the medevac legislation, she states that “there is no need for this bill … this is all about politics. We are very very concerned … it’s unnecessary and it’s all about politics and not about substance”, while previously stating that those requiring medical treatment could already access assistance on Manus Island and Nauru. Henderson has generally upheld the party line on boat turnbacks.

Henderson supported public health measures, including restrictions, to mitigate the spread of COVID-19 in the community, but stated while Victorians understood the need for health restrictions, including those made using State of Emergency powers, restrictions must be proportionate to the public health risk, justifiable and temporary. She also said that she had “raised deep concerns about some restrictions which have closed businesses on what appears to be arbitrary and inconsistent grounds”.

In September 2020, Henderson described Victoria’s roadmap out of COVID-19 restrictions as a “journey of despair”. However, according to The Sydney Morning Herald, Henderson is a member of the center-right faction of the Liberal Party. She was a supporter of same-sex marriage in Australia. In a statement, released in June 2015, she stated that marriage equality “is consistent with fundamental Liberal values which embrace freedom of the individual and stable, long-term relationships”. She also advocated for a free vote on the floor of parliament on the issue for Coalition MPs.

Henderson is pro-choice on the issue of abortion, which has drawn ire from more conservative elements within the Victorian Liberal Party. Nonetheless, on the floor of Parliament, on the question on whether the federal government should ensure that all Australians have access to abortion services, Henderson has almost always voted along party lines. Henderson is opposed to voluntary euthanasia. In October 2017, she tweeted an article written by former Prime Minister Paul Keating arguing against such legislation, adding that Victoria’s euthanasia bill would “embed a culture of dying” in the state.

Sarah Henderson is currently single and not married. She was in a relationship with Simon Andrew Ramsay (born 7 March 1955) who is an Australian politician. He represented the Liberal Party in the Victorian Legislative Council from 2010 to 2018. They separated in 2017. As of March 2022, Sarah Henderson’s husband or partner is unknown to the general public. She has three children. However, upon taking her Senate seat, Henderson was eligible for a $100,000 payout for serving two terms as an MP. She handed back part of this payout saying her decision to keep only a “pro rata” amount was “in line with community expectations”.

How much is Sarah Henderson worth? Sarah Henderson net worth is estimated at around $4 million. Her main source of income is from her career as a politician. Henderson successful career has earned her some luxurious lifestyles and some fancy cars trips. She is one of the richest and influential politicians in Australia. However, By 2017, under the Prime Ministership of Malcolm Turnbull leading up to a discussion on the marriage equality plebiscite within the Liberal Party room, Henderson shifted in favour of the plebiscite, stating that the plebiscite concept had “resonated very positively in the community”.