Apumone brings you Sarkodie net worth 2021.

Micheal Owusu Addo, known more commonly by his stage name Sarkodie, is a Ghanaian rapper, record producer, entrepreneur, executive producer, and Investor. He is the founder of SarkCess Music.

Sarkodie is the sought after rapper in Ghana. The rapper is conceivably one of the richest celebrities in Africa.

He has won numerous awards, performed on both local and international platforms, and his own annual Rapperholic concert which is always a sold-out program since inception. Read on as we reveal Sarkodie net worth 2021.

The rapper is married to his long term girlfriend Tracy SarkCess with two kids  Adalyn Owusu Addo (Titi) and Micheal Yaw Owusu Addo Junior (MJ). The two lovebirds tied the knot on the 22nd of July 2018. They have been together for 14years already, the longest standing celebrities couple.

Their relationship began before Sarkodie became the famous Star he is right now. In a song released at the beginning of 2017,

literally at the beginning of January 1st, Sarkodie described how he fell for Tracy. The song “Just in case ” is dedicated to Tracy, is a declaration of his undying love for her and his appreciation for her being by his side. 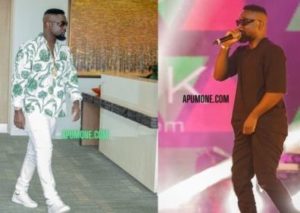 SarkodieHe lives in a luxurious mansion ( he has one in Tema and another in Kumasi, bu+the Tema mansion is worth half a million dollars). Sarkodie has a fleet of cars like Range Rover Sport, BMW, Mercedes Benz etc. He is not fond of showing off his luxuries.

The Adonai hitmaker once had a clothing line dubbed Sark collection which deals in men, women and kids trendy clothes but unfortunately,

he couldn’t maintain it because of his concentrated love for producing music. With all these massive achievements, one might be tempted to ask, How wealthy is Sarkodie?

Global recognized entity Forbes valued Sarkodie to be worth 10.2 million dollars in 2021. However, in 2017, he was ranked the 9th wealthiest artiste on the continent “Africa” with a net worth of 7.5 million dollars. In 2018,

Forbes rated him as one of the richest celebrities in Africa 30 under 30 lists, a compilation across different industries including Film, Fashion, Art and Music.

Sarkodie was named by Forbes Africa to be among others in Africa’s Top 10 richest musicians in 2019. He is unstoppable year by year.

Most recently, he launches his “Black Love Album ” which has generated millions of streams across music platforms.

Sarkodie has the most number of Awards as a musician in Ghana. he is the very first Ghanaian to win the  BET international act Award in 2012 and BET first ever Best international flow award in 2020.

Last year numbers just came in from @BoomplayMusicGH 🙏🏿 Big up Boomplay for the support and bless the fans for streaming…. New music OUT NOW – Gimme Way ft @princybright 😊 pic.twitter.com/5n9lQwkP7f

Thanks for reading! I hope you’re inspired? Do well to share with others.

Two Armed Robbers Gunned Down By Police at Obuasi

Kevin David Net Worth 2021:How much Kevin Davis is worth

Police Officer Killed By Armed Robbers In The Eastern Region

24/06/2021
ABOUT US
Our Motive is to provide reliable, accurate and informative news to you. The Urban and Rural at heart ❤️
Contact us: [email protected]
FOLLOW US
© Apumone 2022 All Rights Reserved
Go to mobile version