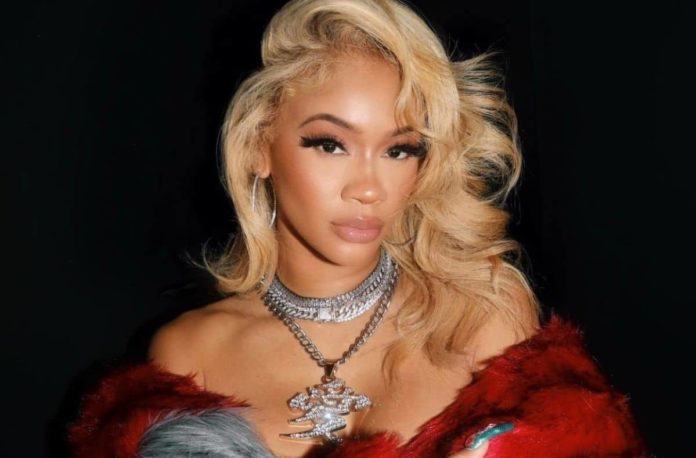 What is Saweetie wealthy?

Saweetie net worth 2021: Saweetie is an American rapper, singer, and songwriter with a net worth of $4 million. After the release of her debut single “Icy Girl”, which earned an RIAA platinum certification, she was signed to Warner Records and her manager Max Gousse’s record label Artistry Worldwide.

She released her debut extended play, High Maintenance on March 16, 2018. Her second EP, Icy was released in March 2019, and spawned the top 40 single “My Type”. Her debut album, Pretty Bitch Music is expected to be released in 2021 and was preceded by the top 20 singles “Tap In” and “Best Friend” (featuring Doja Cat). As of December 2019, Saweetie is managed by music industry veteran Lou Burrell.

Saweetie who real name is Diamonté Quiava Valentin Harper was born on July 2, 1993(age 28 years) in Hayward, California to Trinidad Valentin, her Filipina-Chinese mother and Johnny Harper, her African-American father. She grew up in the Central Valley, attending Merrill F. West High School in Tracy and graduating from Monterey Trail High School in Elk Grove. She began writing music at age 13. After high school, she went on to attend San Diego State University, where she studied communications and business before transferring to the University of Southern California, where she completed her degree and received a Bachelor of Arts (BA) in communications. After graduating, she began to focus on her rap career.

Saweetie began posting short raps on her Instagram account in 2016. One video featured her rapping over the beat from Khia’s “My Neck, My Back (Lick It)”, which would eventually turn into “Icy Grl”. The song was released on her SoundCloud in the summer of 2017, and brought her to the attention of Max Gousse, a well-known producer and A&R executive, who became her manager. The video for the song went viral on the Internet and went on to accrue 100 million views on YouTube as of June 2020.

To follow that up, Saweetie released in that same month a freestyle rap called “High Maintenance” accompanied by a short clip of herself rapping a verse to the song, all while chilling in her kitchen. It would go viral on Instagram and Twitter as well. In October 2017, she released a video for her song, “Focus”, which samples DRAM’s “Gilligan”.

In January 2018, she was named Tidal’s Artist of the Week and one of Pigeons & Planes’ Best New Artists of the Month. During Super Bowl LII in February 2018, she was featured in an ad for Rihanna’s cosmetic company, Fenty Beauty. That month, she signed to Warner Bros. Records (since May 2019 Warner Records) and her manager Max Gousse’s record label Artistry Worldwide.

In February 2018, Saweetie launched her own record label, called Icy Records. Saweetie released her major label debut EP, High Maintenance, on March 16, 2018. It is composed of nine tracks and was produced by CashMoneyAP, Nyrell, and Saweetie’s cousin, Zaytoven. The single, “Icy Girl” was certified Gold in June 2018, for sales of 500,000 in the US. In September 2019, the single was certified RIAA multi-platinum and reached #1 on Billboard’s rhythmic songs airplay chart.

Saweetie released her second major label EP, Icy, on March 29, 2019. The EP’s first single, “My Type”, written by Saweetie and produced by London on da Track, samples “Freek-a-Leek” by Petey Pablo. Debuting on the Billboard Hot 100 at number 81, It was the first song of Saweetie’s to enter the Hot 100. “My Type” later peaked at number 21, becoming Saweetie’s first top 40 hit on the Billboard Hot 100. A remix of the song featuring Jhené Aiko and City Girls was released on August 23, 2019. In September 2019, “My Type” hit number 1 on the Rhythmic Radio charts, and was later certified double platinum in the United States.

Saweetie collaborated with PrettyLittleThing to launch a 59-piece clothing collection, PrettyLittleThing x Saweetie, in September 2019. She said the theme of the capsule was “a boujie rich girl enjoying the finer things in life. It debuted during New York Fashion Week. Saweetie appeared on Nick Cannon Presents: Wild ‘N Out as a guest performer, where she performed her single, “My Type” which aired on VH1 on January 28, 2020.

Saweetie released the lead single, “Tap In”, from her upcoming debut album titled Pretty Bitch Music on June 20, 2020. The single peaked at number 20 on the Billboard Hot 100 and became her first song to enter the UK Singles Chart, peaking at number 38. In September 2020, the single reached number one on Mediabase’s Urban Radio Chart as well as the Billboard x Triller US and Global charts. The track was Saweetie’s second single to reach Billboard’s Hot 100. In August 2020, Saweetie released a remix of the single, titled “Tap In Remix”, that featured rappers Post Malone, DaBaby and Jack Harlow. This was followed by the promotional single, “Pretty Bitch Freestyle”, on July 2, 2020.

On July 31, 2020, Saweetie appeared alongside American rapper Tay Money on the song “Bussin 2.0”, with a music video premiering the same day. On August 6, 2020, Saweetie was featured on Ava Max’s song, “Kings & Queens, Pt. 2”, alongside Lauv. On October 23, 2020, she released “Back to the Streets” featuring Jhené Aiko, which serves as the second single from Pretty Bitch Music. The album’s third single, “Best Friend” featuring Doja Cat, was released on January 7, 2021.

How Much Saweetie Worth? Saweetie net worth 2021: Saweetie’s net worth is estimated at around $4 million. Her major source of income is generated from her primary career as a singer and rappe. Her success career has earned her some of the luxuriuos lifestyle and some of the fancy cars, However, in 2020, Saweetie was added to Forbes’ 30 Under 30 Music list and Variety’s Hitmakers Impact list. As of March 2021, Saweetie has also launched a jewelry line, a capsule clothing collection (partnering with retailer PrettyLittleThing) and a co-branded makeup collection with cosmetics retailer Morphe. In October 2020, she launched her own virtual educational content series, called Icy University. In April 2021, Saweetie released the extended play, Pretty Summer Playlist: Season 1. The EP was supported by the singles “Risky” featuring American rapper Drakeo the Ruler and “Talkin’ Bout” by Loui featuring Saweetie. On May 7, 2021, Saweetie released “Fast (Motion)” as the fourth single from Pretty Bitch Music.

Saweetie began dating American rapper Quavo of Migos in September 2018. They were first seen together during New York Fashion Week. On March 19, 2021, Saweetie confirmed via social media that she and Quavo are no longer in a relationship. Rumors of their eventual breakup started circling around earlier in the month, when Saweetie and Quavo unfollowed each other on Instagram. Saweetie also mentioned on social media that Quavo was unfaithful. She wrote, “Presents don’t band aid scars and the love isn’t real when the intimacy is given to other women.” In late March, video footage surfaced showing the pair in a physical altercation that allegedly happened in 2020.

She is the cousin of actress Gabrielle Union. Her grandfather, Willie Harper, played football for the San Francisco 49ers. She is a fan of the Sacramento Kings basketball team.