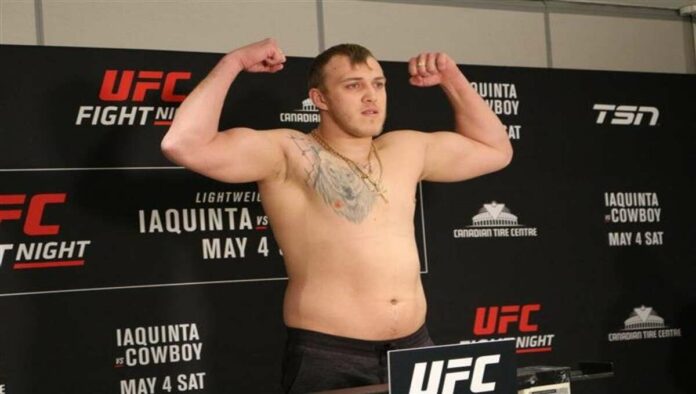 Read about Sergey Spivak net worth, age, wife, children, height, family, parents, salary, and tv shows as well as other information you need to know.

Sergey Spivak whose birth name is Serghei Spivac was born on January 24, 1995 (age 27 years) in Chișinău, Moldova. He is the son of Moldovan parents. He made his MMA debut in September 2014 with the Ukrainian promotion Real Fight Promotion, at 19 years old. He faced Andrey Serebrianikov as his first opponent. He won the fight at the last minute of the first round, by way of TKO. His second fight was with the Ukrainian-based World Warriors Fighting Championships, at WWFC Ukraine Selection 1, where he faced Evgeniy Bova in the main event. Spivak won the fight in the first round by way of a kimura.

Spivak’s second fight with World Warriors Fighting Championships was during WWFC: Ukraine Selection 4, in the main event. His opponent was Yuri Gorbenko, whom he defeated in the first round through an armbar. Spivak would then fight against Dimitriy Mikutsa, under the N1 Pro organization. Spivak submitted Mikutsa through an armbar during the last minute of the second round. Under the banner of the Eagles Fighting Championship, Spivak faced Artem Cherkov. Spivak would beat him in the first round, by way of a head kick.

He returned to the World Warriors Fighting Championships after a year-long layoff. His first opponent was Luke Morton, whom he beat by KO. In his next fight, Spivak fought against the MMA veteran Travis Fulton for the vacant WWFC Heavyweight Championship, a fight which he won in the first round by a rear naked choke. He would defend the title 10 months later against the Croatian fighter Ivo Cuk, winning the bout in the first round by TKO. His last fight with WWFC was his last title defense, five months after his fight with Cuk, against Tony Lopez. He defeated Lopez by a neck crank in the last minute of the first round.

Sergey Spivak made his UFC debut during UFC Fight Night 151, at 23 years old, against Walt Harris, replacing Alexey Oleynik. He suffered the first professional loss of his career. Harris pushed Sergey up to the cage, dazed him with a left straight and dropped him to the floor with a barrage of knees. After a series of grounded strikes, the referee awarded Harris a win, after 50 seconds, by way of a TKO.

Spivak fought against Tai Tuivasa at UFC 243 five months after his first loss. Spivak began the fight being aware of Tuivasa’s power. Spivak was dropped once in the first round by a leg kick. Spivak then began catching Tuivasa’s leg kicks and would take the Australian down. Whenever the Australian would return to his feet, Spivak would pursue takedowns. The fight ended in the fourth minute of the second round, Spivak took Tuivasa down for the 7th time in the fight. He was able to obtain the mount and after several hard punches and elbows, he was able to obtain an arm triangle choke, awarding him his first UFC win.

Sergey Spivak was scheduled to face Jared Vanderaa on December 12, 2020, at UFC 256 However, Vanderaa tested positive for COVID-19 during fight week and had to be pulled. The pair eventually met on February 20, 2021, at UFC Fight Night 185. Spivak won the fight via technical knockout in round two. Spivak faced Alexey Oleynik on June 19, 2021, at UFC on ESPN 25. He won the bout via unanimous decision.

He faced Augusto Sakai on August 6, 2022, at UFC on ESPN 40. He won the fight via technical knockout in round two. Spivak was expected to face Derrick Lewis in the main event of UFC Fight Night 215 on November 19, 2022. However, Lewis was forced to pull out of the event due to a non-COVID, non-weight-cutting illness and the bout was canceled. The pair was rescheduled for UFC Fight Night 218 on February 4, 2023.

Sergey Spivak is married to Bukatar Yana, they had their wedding in Moldova. His wife is also a Moldovan and they have a child together. Their first child a daughter was born in 2020. As of January 2023, Spivak and his wife Bukatar Yana are still married and living a happy life with their daughter.

How much is Sergey Spivak worth? Sergey Spivak’s net worth is estimated at around $3 million. His main source of income is from his primary work as a mixed martial artist. Sergey Spivak’s salary per month and other career earnings are over $500,000 dollars annually. His remarkable achievements have earned him some luxurious lifestyles and some fancy car trips. He is one of the richest and most influential mixed martial artists in Moldova. Sergey Spivak stands at an appealing height of 1.91m and has a good body weight of 111kg which suits his personality.