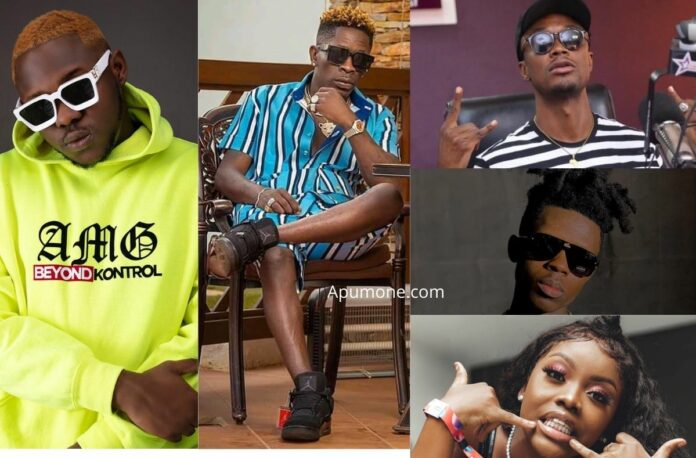 Shatta Wale clashes with Medikal, Manifest, El, Strongman Burner, and Gyakie. This a historic clashes in Ghana Music Industry as these musicians go head to head on the 19th.

Shatta Wale who is releasing his much awaited first song(Blowup) of his Gift Of God Album is to battle fellow Ghanaian artists who are also releasing their songs on same day. Shatta Wale song features Jamaican Act Skillibeng. Shatta Movement camp can’t wait as this is the first international collaboration from the Gift Of God Album.

Ghanaian’s 2019 rapper of the year is set to also release his Ep same day. Medikal Ep is titled Amazing Grace. He will be ushering his track with Kwame Eugene titled “Oseiyie”.

No Fear is the title of the song Manifest will also release on Friday 19th. No Fear features Vic Mensa, Moliy. The track is about fear in humans and how to over come it.

The Ghanaian new sensation will feature Nigerian Act Omah Lay. The song is a remix of Gyakie’s Forever track. Forever was released 7 months ago and had gotten 2.2 million views on youtube.

The “No Diss” hit-maker is also to release his new single on same day. Strongman has been one of Ghana’s outstanding rappers.

He is also preparing to release Wavs Album of his Label tomorrow 19th March. The Album is a collection of his life experiences for the past years. He featured Sarkodie, Ayisi, Oxlade, and Ladipoe on the album. El started working on the Album in 2018 but went through some depression from 2019 to 2020. Finally he s out with the long waited album.

Ghanaians are anxious and can’t wait for the day 19th March 2021 as history will be made. One of the Artist will carry the day and fans are tipping Shatta Wale to Shadow the rest as he as the biggest fan base in Ghana. Can there be Shock in views and streams? comment below or follow us on Facebook(Apumone.com)