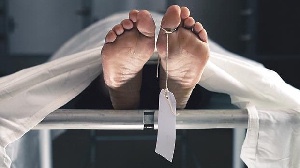 Speaking to Crime Check Television, Samuel Who is out of Prison said there are time he will be dressing a corpse for burial and the corpse will open its eyes.

When the host asked what he did, he stated that he is only a worker so he has never been scared of such moment.

He always have special prayers and things he does before dressing corpse so it’s a normal routine for him.

More on what led him to prison, Samuel Okyere states that a lady he was dating actually connived with her newly found boyfriend to take him to prison.

He accused his ex girlfriend of lying that he stole her item which eventually landed him in prison for 18 months.

Crime Check, a charity organization made donation to Samuel to invest in his undertaking business since it’s something he intends doing while he is out of prison.