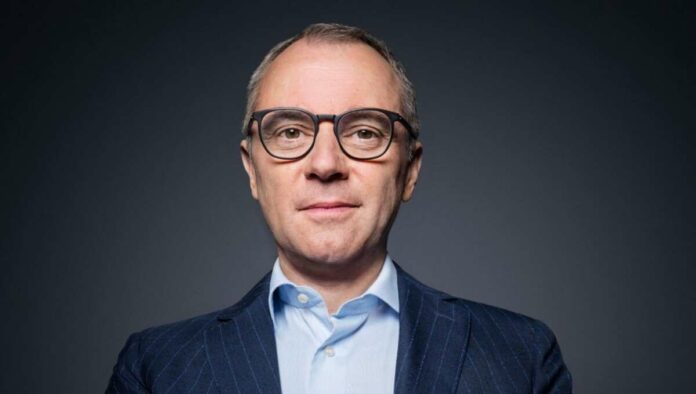 Read the write-up of Stefano Domenicali net worth, age, wife, children, height, family, parents, salary, Formula One records as well as other information you need to know.

Stefano Domenicali is an Italian manager and the current CEO of Formula One Group, replacing Chase Carey. He was the CEO of Italian sports car manufacturer Lamborghini from 2016 to 2020. He was the team principal of the Scuderia Ferrari Formula One team. Under his leadership, Ferrari won their last Formula One World Championship to date.

Stefano Domenicali was born on May 11, 1965 (age 57 years) in Imola, Italy. He is the son of a banker. As a child, he used to go to the Autodromo Enzo e Dino Ferrari race track at weekends to help out in the paddock and in the media center – an experience that piqued his interest in motor racing.

Stefano Domenicali studied business administration at the University of Bologna, graduating in 1991. Upon graduation, he joined Ferrari where he worked in the finance department. Between 1992 and 1994, he was race director at Mugello and was involved in DTM and other racing series.

Check Out: Bernie Ecclestone net worth

Domenicali was appointed head of personnel in Ferrari’s sporting department in 1995 and was involved with sponsorship liaison, before being promoted to Team Manager in December 1996.

He remained there until January 2001. After a brief stint as Logistics Manager, he became the team’s Sporting Director in 2002. On 12 November 2007 Ferrari announced Domenicali would take on the role of Director of the Ferrari Formula One team, a position previously held by Jean Todt, and became team principal in 2008.

Stefano Domenicali led the team into 2011, which saw Fernando Alonso finish fourth in the championship table, two places ahead of Felipe Massa in sixth. Then came the 2012 season, which saw Fernando Alonso just missing out on the title; a result masked by his outstanding performance since his teammate was 156 points behind him. He and Ferrari claimed three Grand Prix victories and placed second in both the Drivers’ and Constructors’ Championships.

Domenicali was named one of “The Men of the Year 2012” by Top Gear magazine for keeping Ferrari at the sharp end of F1, against the odds. Domenicali resigned as Ferrari team principal in April 2014.

In October 2014, Domenicali was hired by Audi. He was also appointed as head of the FIA’s Single-Seater Commission. On 15 March 2016, he was appointed CEO at Automobili Lamborghini S.p.A. He was replaced by Stephan Winkelmann on 01 December 2020.

Check Out: Toto Wolff net worth

In September 2020, it was announced that Stefano Domenicali would replace Chase Carey as CEO of Formula One Group from the 2021 season. He stands at an appealing height of 1.83m and has a good body weight which suits his personality.

Stefano Domenicali is married to Silvia Colombo, they had their wedding in 2011. His wife is a private person and they have children together. The couple held their wedding ceremony in Italy. Stefano Domenicali and his wife Silvia are still married as of 2022 and are living a happy life with each other without facing any kind of problems, tension and misunderstanding.

How much is Stefano Domenicali worth? Stefano Domenicali net worth is estimated at around $120 million. His main source of income is from his career as a motorsport executive. Domenicali salary per month and other career earnings are over $20 annually. He is one of the richest and influential motorsports executives in the world.