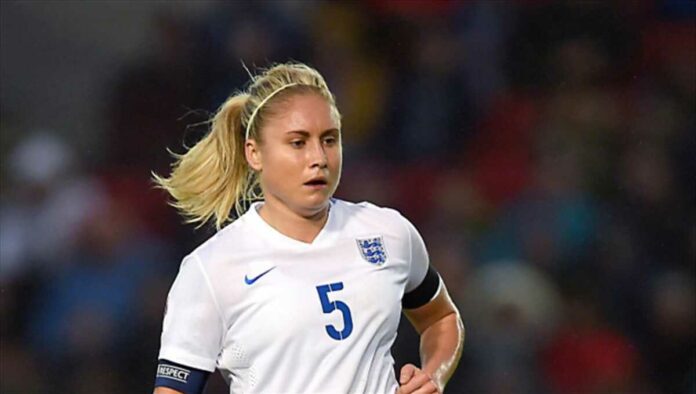 Steph Houghton is an English footballer who plays for both Manchester City and the England national team. At the club level, Houghton started at Sunderland in her native North East England before moving on to Leeds United in 2007 then Arsenal Ladies in 2010. She broke into the Sunderland team as a striker before moving back into midfield and later into defense.

Houghton has played over 100 times for the England national team since her debut in 2007. She suffered serious injuries immediately before the 2007 World Cup and Euro 2009 but recovered to play in the 2011 World Cup and Euro 2013. She was made England captain in January 2014. At the 2012 London Olympics, Houghton scored three goals in Great Britain’s four games, including winners against New Zealand and Brazil. Houghton was appointed Member of the Order of the British Empire (MBE) in the 2016 New Year Honours for services to football.

Stephanie Jayne Houghton Darby MBE was born on April 23, 1988 (age 34 years) in Tyne and Wear, United Kingdom. She was born and raised by her parents Len Houghton (father) and Amanda Houghton (mother) along with her brother Stuart Houghton.

Steph Houghton began her career playing for five years at Sunderland. She helped Sunderland to win promotion from the Northern Division in 2005–06 and then won the FA Young Player of the Year Award in 2006–07. After Sunderland were relegated that season, Houghton became a target for Arsenal and Everton.

Steph Houghton was involved with England at U16 schools, U19, U20, U21 and U23 levels. She was called into the full squad for a match against Germany on 25 October 2006, when Katie Chapman withdrew with an illness. She was an unused substitute in the 5–1 defeat in Aalen.

Houghton made her debut in the next match, replacing Emily Westwood after 73 minutes of a 6–0 win over Russia in Milton Keynes on 8 March 2007. Her first start came three days later, in a 1–0 win over Scotland at Adams Park. She missed the 2007 World Cup with a broken leg and Euro 2009 with a damaged cruciate ligament.

In May 2009, Houghton was one of the first 17 female players to be given central contracts by The Football Association. She played in all three games at UEFA Women’s Euro 2013 as England finished in last place; she described the result as “a massive disappointment personally and collectively as a squad.” In January 2014 she was named the new captain for England’s team under coach Mark Sampson, beginning on a 1–1 draw with Norway.

For the 2015 World Cup in Canada, Houghton was again named England’s team captain. Houghton scored her first World Cup goal against Norway in the round of 16, and was chosen Player of the Match during the quarterfinals with Canada, which qualified England for their first semi-finals ever.

Steph Houghton earned her 100th England Cap on 11 November 2018 against Sweden at New York Stadium in Rotherham, South Yorkshire. In May 2019 it was announced that Houghton had been selected for the 2019 FIFA Women’s World Cup in France. She scored a goal in the Round of 16 matches against Cameroon.

Houghton was called up to the first Great Britain women’s side for the 2012 Summer Olympics as a defender. She became the team’s record goalscorer from the left–back position, scoring in all three group games to help Great Britain to win the group with a 100% record, as well as making important challenges to help ensure the side progressed without conceding a goal. Houghton was also named left back of the tournament due to her outstanding performance during the games. In October 2014, Houghton was the first female player to appear on the cover of Shoot magazine.

Steph Houghton is married to Stephen Darby, they had their wedding on June 21, 2018. Her husband is a former professional footballer who played as a right-back. Steph’s partner Darby represented England at the under-19 level. He was part of the Bradford team that reached the 2013 Football League Cup Final, made over 200 appearances for the club and captained the side for two seasons. On 18 September 2018, Steph Houghton’s illness worsen and was forced to announce his retirement from professional football at the age of 29 after being diagnosed with motor neurone disease. As of mid-2022, Steph Houghton and her husband Stephen Darby are still married and are living a happy life with their baby, Jasper.

How much is Steph Houghton worth? Steph Houghton net worth is estimated at around $3 million. Her main source of income is from her career as a football player. Steph Houghton’s salary per month and other career earnings are over $350,000 annually. Her successful career has earned her some luxurious lifestyles and fancy car trips. She is one of the richest and most influential female football players in the United Kingdom. Steph Houghton stands at an appealing height of 1.74m and has a good body weight which suits her personality.