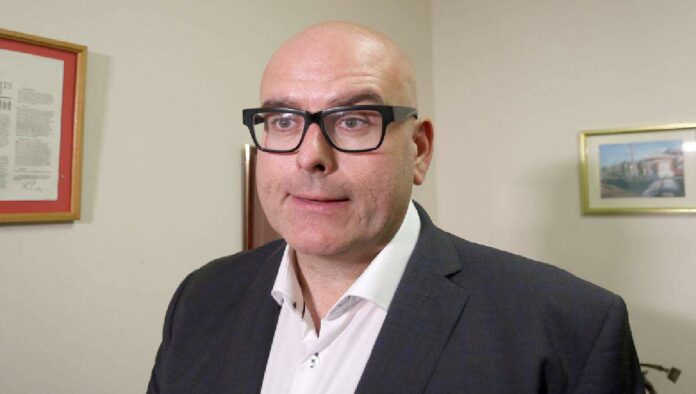 Steven Del Duca is a Canadian politician who has been the leader of the Ontario Liberal Party since March 7, 2020. He previously served in the provincial cabinet from 2014 to 2018, first as transportation minister and as economic development minister. He represented the riding of Vaughan in the Ontario Legislative Assembly from 2012 to 2018.

Steven Alfonso Del Duca was born on July 7, 1973 (age 48 years) in Etobicoke, Ontario, Canada. He is a first-generation Canadian, born to an Italian father and a Scottish mother. His paternal grandfather immigrated to Canada from Italy in 1951. Del Duca’s younger brother, Michael Del Duca, was killed in a car crash in June 2018.

Del Duca has cited his grandparents as key influences on his political career, stating, “Ontario and Canada gave them a ton of opportunity. I grew up believing… you have to be dedicated, sacrifice, and all those important things. But the other half of the bargain is that this province, this country is supposed to give you a real opportunity.”

He studied political science and Canadian history at the University of Toronto and Carleton University before earning a law degree from Osgoode Hall Law School. Steven was not called to the bar in Ontario and has not practiced law. He accepted the position of director of public affairs for the Carpenters’ District Council of Ontario prior to graduating from law school.

Steven Del Duca has been an active Liberal since 1988 when he was 15 and has worked for three decades as a local campaign volunteer, riding president, campus club president, political staffer, campaign manager, candidate, MPP and cabinet minister.

Steven Del Duca ran as the Liberal candidate in the riding of Vaughan in 2012. A by-election was called to replace Greg Sorbara who retired earlier in the year. He defeated the Progressive Conservative (PC) candidate Tony Genco. He was re-elected in the 2014 provincial election defeating PC candidate Peter Meffe.

Del Duca was appointed to the cabinet by Premier Kathleen Wynne as the Minister of Transportation on June 24, 2014. In this role, he was one of the ministers responsible for the largest infrastructure investment in Ontario history, including $29 billion dedicated to transit and transportation.

In June 2016, the Ministry of Transportation issued a press release about twelve new stations for the GO Transit network, only ten of which had been approved by the Metrolinx board planning the regional transit projects. The board convened in late June to approve the two additional stations, Kirby GO Station for the Barrie line, and Lawrence East station as part of the SmartTrack project. Metrolinx reports stated that the Kirby station would have a negative effect on overall ridership on the line.

Del Duca defended the decision stating that Metrolinx’s original analysis didn’t take into account the explosive population growth planned in Vaughan and Etobicoke, and the transit needs that would accompany this growth. He also noted that a similar economic assessment done by Toronto staff gave the Toronto Relief Line a negative score despite an expert consensus that the project was needed to meet Toronto’s long-term transit needs.

Steven Del Duca taught a course at York University from January to April 2019 after losing his seat. Weeks after losing his provincial seat, it was reported that Del Duca would be running to be regional chair of York Region in the October 22, 2018, municipal election, but owing to the provincial government’s passing of the Better Local Government Act, there was no election for the post.

Del Duca announced on April 3, 2019, that he would enter the 2020 Ontario Liberal Party leadership election. On March 7, 2020, he won the election with 58.8 percent of the ballot vote, having received 1,258 delegate votes. Under his leadership, the Ontario Liberals have retired their $10 million debt from the 2018 election and nominated an equal slate of male and female candidates across the province.

He has focused his time on publicly-funded education, health care, a clean, safe and healthy environment, and economic dignity. Key commitments include a plan to end for-profit long-term care and adopt a “home-care first” approach to seniors’ care, a portable benefits package for Ontario workers, and a ban on handguns across the province.

Del Duca has also announced that the Ontario Liberal Party will work to provide equal pay and opportunity for women, create five new provincial parks, fight systemic racism in schools and policing, and boost Old Age Security payments. Del Duca will run in the riding of Vaughan—Woodbridge in the election scheduled for June 2, 2022.

Steven Del Duca is married to Utilia Amaral, they had their wedding in the 2000s. His wife is a private person and they have two children. He lives with his wife, Utilia Amaral, and their two daughters, in Woodbridge, Ontario. He founded a local group called Go Vote Vaughan in 2006 in an effort to boost voter turnout in his hometown’s municipal elections and worked on a city task force for democratic reform at a time when Vaughan’s local government had a reputation for dysfunction.

How much is Steven Del Duca worth? Steven Del Duca net worth is estimated at around $5 million. His main source of income is from his career as a politician. Del Duca successful career has earned him some luxurious lifestyles and some fancy cars. He is one of the richest and influential politicians in Canada. However, In 2008, he served as the fundraising chair for the Annual Vaughan Hospital Fundraising Gala which raised over $1 million. He worked with all levels of government, community leaders and organizations to establish the Greater Toronto Region Economic Summit, which took place in May 2009.