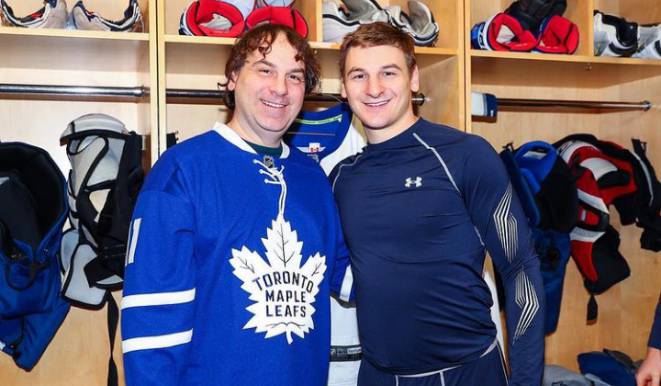 Read the write-up of Stuart Hyman net worth, wife, children, business as well as other information you need to know.

Stuart Hyman is a Canadian businessman and entrepreneur. He is the Chairman and Governor of the Markham Royals and the Chairman of the Ontario Junior Hockey League (OJHL). Since the late 1990s, the hockey entrepreneur has spent millions of dollars on his sporting acquisitions.

Stuart Hyman was born in Toronto, Canada. Hyman is Jewish and attended United Synagogue Day School and graduated with honours from a Jewish high school, the Community Hebrew Academy of Toronto.

Hyman bought hockey clubs because he has a passion for the game. At the time Hyman was accumulating his clubs, each of which included several teams of varying age and skill levels, the going market rate was estimated at $300,000 each.

According to Hyman, “I’m different from anybody else because I’m a leader and I try to do what I think is right for hockey,” Hyman said. “Unfortunately, when you’re a leader you always have people who are jealous and envious of you.”

In March, Stuart Hyman bought International Scouting Services (ISS), a company that scouts players and publishes a monthly NHL scouting report. A few months later, the Florida Panthers selected his 18-year-old son Zach Hyman in the fifth round of the 2010 NHL draft.

The six-foot centre, who captained his father’s Hamilton Red Wings, posted an impressive 75 points in 49 games. But leading up to the draft, Zach sat on the bubble, falling off the NHL’s top-210 ranking after sitting at 175th on the mid-term spring rankings.

“We think there were 210 other skaters that have a better chance of being an NHL player than Zach Hyman,” said NHL Central Scouting Bureau director E.J. McGuire. ISS, meanwhile, ranked Zach 120th. He was ultimately drafted 123rd. Hyman chafes at any suggestion that his purchase of ISS was motivated by a wish to help his sons get drafted.

“A kid gets drafted on his own merit,” said Hyman, adding that he doesn’t prepare the player rankings for his company. “ISS cannot get a kid drafted … It’s up to the NHL teams that spend millions of dollars on their own scouting staff, and they make those decisions.”

Scott Luce, director of scouting for the Florida Panthers, says that while his staff keeps an eye on ISS rankings, they weren’t responsible for Zach’s drafting.

“It was pure coincidence,” he said. “Once we identify a prospect, we spend significant time doing our due diligence. While (Zach) might have dropped off the radar of the (NHL Central Scouting) list, internally he never dropped off our radar.”

A range of hockey experts interviewed by the Star says they’ve never seen such corporate investment by a parent in hockey organizations connected to their children.

Stuart Hyman’s actions have raised eyebrows in hockey circles, where no one can remember a parent ever going to such lengths to purchase interests in the on-ice careers of their children. “Hockey has not been faced with the likes of Stuart Hyman before,” said John Gardner, president of the Greater Toronto Hockey League, from which Hyman withdrew as an owner of more than 90 teams following a high-profile league investigation in 2004. No one in Canada — and likely anywhere else — had ever before controlled such a vast collection of competitive kids’ hockey teams.

“There’s no question that a person accumulating a variety of assets that may or may not enhance their sons’ ability to play pro hockey is somewhat unique,” said NHL player agent Anton Thun. “To go to the extent of acquiring a scouting service is taking it one step further than anyone else has.”

Hockey agent Ritch Winter calls Hyman’s approach “unique.” “I’ve had parents with resources who’ve said they purposely didn’t buy teams because they didn’t want to be seen as influencing the path of their kids. Neither is right or wrong. It’s just a very interesting level of involvement.”

The Hyman family hockey development program has attracted its share of controversy. At the time of a Star investigation into Stuart Hyman’s transformation from hockey dad to minor hockey mogul in 2004, basic player fees on some of his teams were double the typical league rates — leading to concerns he could be using non-profit kids’ hockey teams as money-making enterprises. It’s an allegation Hyman vigorously denies, saying he personally sponsored young players who couldn’t afford to play and provided better equipment and training for his teams.

In the aftermath of the Star investigation, and vigorous public reaction that followed, the GTHL imposed strict new rules over ownership and corporate transparency. It remains a sore spot for Stuart Hyman.

“I have probably helped more kids get to the NHL level than anyone else in the GTHL, period,” he says. “Because I’m different from other people doesn’t mean anything else is going on other than I have a big heart.”

Stuart Hyman is married to Vicky Hyman. The couple has three children, Zach Hyman, Spencer Hyman, and Oliver Hyman. Stuart’s sons have played on hockey teams owned and operated by their dad. When the two oldest reached the junior level, they suited up for the Hamilton Red Wings of the Ontario Junior Hockey League, another Hyman-owned club.

Now, with the two senior brothers in their late teens, their father has purchased a scouting company that ranks prospective draftees for a client base of general managers, coaches and scouts. It’s a cradle-to-National-Hockey-League development strategy unheard of in the hockey world.

How much is Stuart Hyman worth? Stuart Hyman net worth is estimated at around $100 million. His main source of income is from his investments in Ice hockey teams and real estate. He is one of the richest ice hockey teams owners in Canada. However, Stuart Hyman said his ownership of hockey organizations has only made his sons’ hockey paths more challenging. “They played under tremendous pressure and were given the shaft a lot of times because their dad was the owner. It hurts you. It doesn’t help you. You have to be twice as good because people recognize your name.”

28/07/2021
ABOUT US
Our Motive is to provide reliable, accurate and timely news to you. We're social, connect with us: The Urban and Rural at heart ❤️
Contact us: [email protected]
FOLLOW US
© Apumone 2021 All Rights Reserved