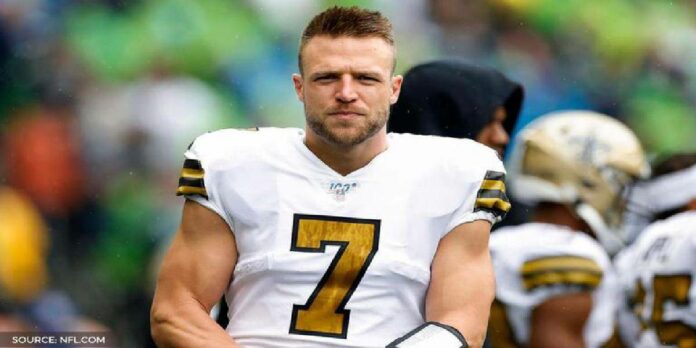 Taysom Hill is an American football quarterback and utility player for the New Orleans Saints of the National Football League (NFL). He played college football at BYU and was signed by the Green Bay Packers as an undrafted free agent after the 2017 NFL Draft.

Hill has played in five offensive skill positions and on both sides of the ball on special teams, including as the team’s primary gunner on a punt return, and has blocked multiple punts in his career although listed as a backup quarterback on the official Saints depth chart. Such atypical utilization of a quarterback has earned him a reputation as one of the NFL’s most versatile players and the nickname “The Human Swiss Army knife” by Saints’ media. In 2020, he saw his first action as a starting quarterback, filling in for four games for an injured Drew Brees, and going 3-1 as a starter.

Taysom Shawn Hill was born on August 23, 1990 (age 31 years) in Pocatello, Idaho, United States. He is the son of Doug Hill and Natalie Hill and has three siblings Dexter Hill, Celeste Hill, and Jordan Hill. Taysom lettered in football, basketball, and track at Highland High School and graduated in 2009. As a senior, he threw for 2,269 yards and 18 touchdowns, and rushed for 1,491 yards and 24 touchdowns, earning the All-Idaho Player of the Year, Idaho Gatorade High School Player of the Year, First Team All-State selection, and All-Region and All-Conference Player of the Year accolades. He holds the school single-season and career records for total offence.

Heavily recruited by head coach Jim Harbaugh, Hill had originally committed to Stanford out of high school, but after returning from his LDS church mission, he enrolled in January at BYU after learning Stanford did not allow incoming freshmen to join the team until June.

In his freshman season of 2012, Hill was number two on the quarterback depth chart. He was initially brought in for special packages to utilize his athleticism in short-yardage situations. In his very first play from scrimmage in college, he threw an 18-yard touchdown pass against Washington State in the home opener. Hill played in 6 games in 2012, starting and winning two starts midseason before suffering a season-ending knee injury in the closing seconds of a victory over Utah State.

Hill resumed starting in the 2013 season. After a tough 19–16 loss in the season opener at Virginia, he bounced back the following week against Texas, with 259 yards rushing and three touchdowns in a 40–21 win. In 2014, Hill sustained a fractured leg against Utah State on October 3, ending his season. BYU lost their first game of the season that night.

Injury again struck Hill at the start of the 2015 season, when he suffered a lisfranc fracture during the opener against Nebraska on September 5. After the game, BYU head coach Bronco Mendenhall announced that the injury would cost Hill the rest of the season.

As a result, Hill was granted a medical redshirt for 2015, making him eligible to return for one final season in 2016. On February 16, he announced that he would be returning to BYU in 2016 rather than pursuing options to play at another school as a graduate transfer.

On August 23, Hill was named the starting quarterback over sophomore Tanner Mangum, who had started after Hill’s injury in 2015. Hill changed his jersey number from 4 to the number 7 that his late older brother Dexter had worn.

He suffered a fourth season-ending injury late in 2016. Against in-state rival Utah State on November 26, he went down with a hyper-extended elbow injury in the fourth quarter and was unable to finish the season.

Hill went undrafted in the 2017 NFL Draft but signed with the Green Bay Packers as a free agent on May 5. He appeared in three preseason games with them, completing 14 of 20 passes, throwing for two touchdowns and rushing for another. He was released during the Packers final roster cut-down on September 2, 2017.

The following day, Hill was claimed off waivers by the New Orleans Saints. He was promoted to the active roster on December 3 and appeared in a total of twelve special teams plays against the Carolina Panthers. In his NFL debut, Hill recorded two special teams tackles on the Panthers’ kick returner Fozzy Whittaker.

Hill was listed as the third-string quarterback to start the 2018 season but was used in a variety of positions throughout the Saints’ season, including as their primary kick returner. During Week 2 against the Cleveland Browns on September 16, he returned his first kick 47 yards as the Saints won 21–18. The next week against the Atlanta Falcons, he had the most versatile performance in his NFL career. On special teams, Hill returned three kicks for 64 yards and made a tackle on a punt. On offence, he rushed the ball three times for 39 yards and was often used as a tight end to block defenders.

He completed his first NFL pass on a fake punt for 10 yards, in the next game against the New York Giants. He also rushed four times for 28 yards, continuing to line up at receiver on offence and still being the primary kick returner. Against the Washington Redskins, Hill rushed five times for 24 yards, including his first NFL touchdown run in a 43–19 victory.

In a 30–20 Sunday Night Football road victory against the Minnesota Vikings on October 28, Hill set up the Saints’ first touchdown of the game by completing a 44-yard pass to Michael Thomas, for his second pass completion of the year. During Week 14 against the Tampa Bay Buccaneers, he blocked a punt from Bryan Anger, which led to a touchdown that propelled the Saints to a come from behind 28–14 road victory, enabling them to clinch the division title. He was named NFC Special Teams Player of the Week.

Hill finished the season with 37 carries for 196 rushing yards and two rushing touchdowns, three receptions for four yards, and passed for 64 yards and an interception. In addition, he had 14 kickoff returns for 348 net yards for a 24.86 average. In the Divisional Round against the Philadelphia Eagles, Hill made a key play as a utility player, running for a first down on a fake punt to begin the Saints’ comeback victory. In the NFC Championship, against the Los Angeles Rams, Hill recorded a touchdown reception in the 26–23 overtime loss.

In Week 13 against the Atlanta Falcons on Thanksgiving, Taysom Hill blocked a punt, rushed for a 30-yard touchdown, and caught a three-yard touchdown pass in the 26–18 road victory. With his fourth touchdown reception of the year, Hill broke the record for most touchdown receptions by a quarterback in a single season. In Week 15 against the Indianapolis Colts on Monday Night Football, Hill caught two passes for 42 yards, including the 541st career touchdown pass thrown by Drew Brees, during the 34–7 win.

Check Out: Drew Brees net worth

In the Wild Card Round against the Minnesota Vikings, Hill had consecutive plays of 11-yard rushing for first down, 50-yard passing followed by a block that enabled a four-yard rushing touchdown by Alvin Kamara in a drive. Hill accumulated 50 yards rushing, 50 yards passing, and 25 yards receiving, including a touchdown late in the game. They ultimately fell to the Vikings 26–20 in overtime.

On November 20, 2020, it was announced that Hill would make his first career start at quarterback for the Saints Week 11 matchup against the Atlanta Falcons due to Drew Brees’ injury. Hill threw 23 passes, completing 18 for 233 yards. He also ran for 51 yards and two touchdowns, helping the Saints beat the Falcons 24–9. In Week 12 against the Denver Broncos, he recorded another game with two rushing touchdowns in the 31–3 victory. In Week 13 against the Atlanta Falcons, he had 232 passing yards and his first two career passing touchdowns in the 21–16 victory. His last start of the season came in Week 14, where despite a two-touchdown, 291-yard passing performance, the team would lose to the Eagles 24-21.

On March 14, 2021, the same day that starting quarterback Drew Brees announced his retirement, Hill signed a 4-year, $140 million extensions with the Saints. The contract was structured in such a way as to free up salary-cap space for New Orleans, saving them $7.75 million against the 2021 cap, and it is not expected that Hill will receive anywhere near the $140 million figure in the deal. Functionally, the deal is a 1-year, $12.159 million extensions, as the remaining three years are expected to be voided. He lost the 2021 Saints starting quarterback job to Jameis Winston.

During the first half of the 2021 season, he spent the year as the third-string quarterback on the depth chart behind Jameis Winston and Trevor Siemian, though he continued in his role as a utility player, appearing in six of the first nine games as a runner, receiver, passer, and on special teams. After a four-game losing streak, Hill was named to the starting quarterback role prior to a Week 13 Thursday Night Football game against the Dallas Cowboys. Though he led the team in rushing with 101 yards on eleven carries, he threw four interceptions to only two touchdowns, and the team lost 27-17.

Taysom Hill is married to his longtime girlfriend Emily Nixon, they had their wedding in 2014 in the Salt Lake Temple in Salt Lake City, Utah. The couple has one sone son. Hill’s brother-in-law is former BYU and NFL linebacker David Nixon. He is a member of The Church of Jesus Christ of Latter-day Saints and served as a missionary for the church in Sydney, Australia, from 2009 to 2011.

How much is Taysom Hill worth? Taysom Hill net worth is estimated at around $10 million. His salary is around $25 million and his main source of income is from his career as an American football player. Hill successful career has earned him some luxurious lifestyles and some fancy cars. He is one of the richest and influential National Football League players in the United States. However, He was named after Taysom Construction Company, formerly located in his hometown of Pocatello, Idaho.