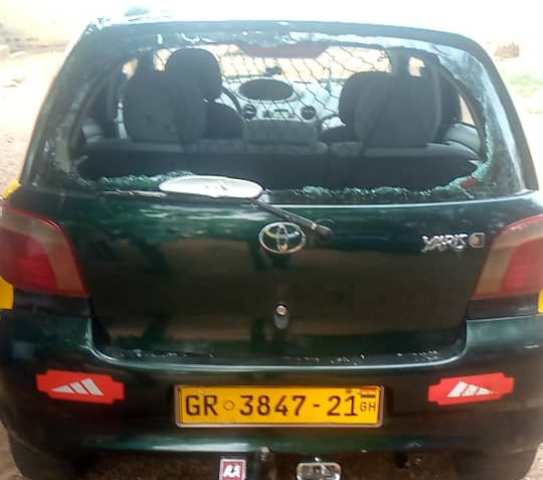 Tempers are still high at Asamankese over what locals describes as deliberate killing of a taxi driver my a yet to be identified military officer.

Angry residents of Asamankese in the Eastern region on Monday, April 5, 2021, mounted roadblocks and later besieged a Police station over the shooting to death of a taxi driver who is also a lumber dealer by Military officers.

The deceased -Yaw George, 33, was shot Monday morning while driving a taxi with registration number GR 3847-21 and escorting a truck transporting his lumber.

The military was reportedly chasing the lumber truck and the taxi driver now deceased. On approaching the Police barrier on Asamankese to Accra road, military personnel on board the vehicle of the task force chasing the truck, opened fire through the back windshield of the car killing the taxi driver instantly.

This led to a massive protest from the residents with a march to the police station for them to arrest the said soldier.

The Ghana armed forces is yet to react to the issue and the Police Service at Asamankese have also remained tight lips.

Asamankese residents have however sent a strong warning, they will be left with no choice than to revenge the death of the six driver if authorities do not arrest and prosecute the soldier who pulled the trigger.