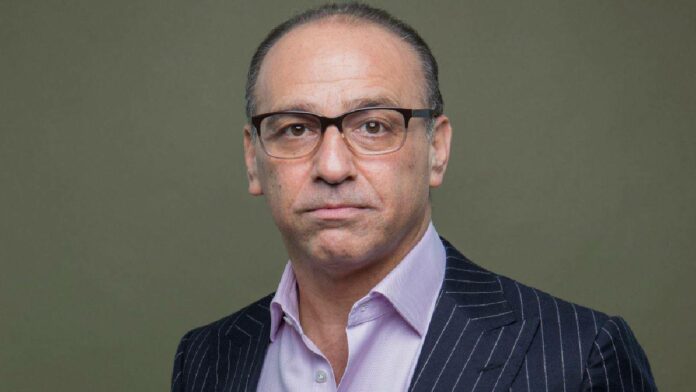 Theo Paphitis is a Greek-Cypriot British retail magnate and entrepreneur. He is best known for his appearances on the BBC business programme Dragons’ Den and as former chairman of Millwall Football Club. Paphitis has made the majority of his fortune in the retail sector. In 2006, he sold his equity stake in the lingerie brand La Senza for a reported £100 million.

Paphitis is the owner of stationery chain Ryman, the homewares specialist Robert Dyas and lingerie retailer Boux Avenue. In May 2018, Solent University in Southampton named Paphitis as their new Chancellor. Paphitis was inaugurated as the university’s Chancellor on 11 October 2018. He will serve a minimum of three years. Paphitis succeeded Lord West of Spithead.

Theodoros “Theo” Paphitis was born on September 24, 1959 (age 62 years) in Limassol, Cyprus. He is the second son of three brothers, with elder brother Marinos Paphitis and younger brother George Paphitis. They also share two half-brothers. Paphitis first lived in Old Trafford in Greater Manchester when his family arrived in the UK from Cyprus.

His father then bought a terraced house in Gorton, Manchester where he lived for three years, attending Peacock Street junior school in the area. Paphitis moved to London with his parents and Marinos when he was nine years old. Paphitis attended Ambler Primary School in Islington and Woodberry Down Comprehensive School in Manor House, where he battled with dyslexia, but began his entrepreneurial activities by running the school’s tuck shop at the age of 15.

Theo Paphitis took a job as a tea boy and filing clerk at a City of London insurance broker. Wanting more money, he discovered his passion for retailing and sales when at 18 he worked as a sales assistant for Watches of Switzerland in Bond Street. At age 21, he joined Legal & General selling commercial mortgages, which taught him to read other businesses’ balance sheets.

Paphitis set up a property finance company at age 23 with close friend and business associate Mark Moran, and kept going when the friend left in partnership with Hanover Druce, making his first money on the rise of the 1980s commercial property markets. Spotting the rise in mobile telephones, he bought into NAG Telecom, becoming chairman alongside fellow director Tony Kleanthous. Paphitis gained a large market share for NAG by negotiating concessionary positions in Ryman stationery stores.

He approached the administrators and bought the company when Ryman went bankrupt. He turned it around by improving relations with suppliers, and enthusing the management team, cementing his reputation for turning failing companies into highly successful and profitable businesses. His ventures now include Ryman, Robert Dyas and Boux Avenue. He sold Red Letter Days with fellow Dragons’ Den businessman Peter Jones. In 2006, he sold his equity stake in the UK and EU segment of the global lingerie brand, La Senza, for a reported £100m.

In 2008, Theo Paphitis was one of several interested parties in bidding for failed retail chain Woolworths. However, he was later pulled out because of unrealistic numbers quoted by the administrators. In March 2011, Paphitis set up a lingerie chain, Boux Avenue, which by the end of 2018 had grown to 30 UK stores, with others overseas. In July 2012, he bought the hardware retailer Robert Dyas, saying: “It is a business which fits well with my investment criteria.” In October 2016, Paphitis acquired London Graphic Centre, a specialist art and stationery retailer based in London’s Covent Garden.

Theo Paphitis took Millwall out of administration and on to the 2004 FA Cup Final at the Millennium Stadium as chairman from 1997. He is perhaps best known for his work to reduce football hooliganism and appointing as Millwall manager Dennis Wise, and together they guided the club to their first official appearance in the final of the FA Cup and European football. After almost eight years at the helm of Millwall, Paphitis stepped down from his role as chairman in 2005.

Paphitis is a director and part-owner of Isthmian League side Walton & Hersham. Paphitis’ other companies became sponsors of the League’s cup competitions with Robert Dyas sponsoring cup tournaments. Boux Avenue became the title sponsor of the Boux Avenue Women’s Cup.

After appearing on series four of the BBC Back to the Floor series while chairman at Millwall FC, Paphitis was approached to become one of the “dragons” in the second series of the BBC Two entrepreneurship series Dragons’ Den in 2005 and left the programme after series 10 in 2012. Paphitis was known as a straight-talking but approachable and sincere ‘dragon’ who made many investments on the show, both alone and jointly with other dragon investors. In February 2013, he announced that he would be leaving the show.

In 2010, Paphitis had a three-part television series on BBC Two called Theo’s Adventure Capitalists. The series followed British businesses looking to enter new markets in Brazil, India and Vietnam. The series was supported by the Open University. In 2011, Paphitis presented the seven-part BBC Two series called Britain’s Next Big Thing. The series examined the stories of artists, scientists, manufacturers and brand owners looking to sell their products and services to UK retailers including Boots and Liberty.

Paphitis returned with appearances on BBC’s Question Time and ITV’s The Agenda after time away from television to concentrate on business. In March 2014, he appeared in Famous, Rich and Hungry, a two-part BBC documentary series that aimed to promote awareness of British people living in poverty and raise money for Sport Relief.

In September 2019, Paphitis returned to the seventeenth series of Dragons’ Den for four episodes, stepping in for Touker Suleyman, who had been recovering from a short-term illness. In June 2021, Paphitis once again returned to Dragons’ Den, this time for its eighteenth series, for three episodes as a replacement for Peter Jones, due to his self-isolating from COVID-19.

Theo Paphitis is a keen fan of cars. His car collection has a series of personalized number plates, including RYM4N on his Maybach. Paphitis has been criticized for some of his views on women. In 2008, he was quoted by Kira Cochrane of The Guardian newspaper as saying that although women may refuse to take maternity leave, “their brains turn to mush” after the pregnancy and “they take three months off”.

Theo Paphitis is married to his longtime girlfriend Debbie Paphitis, they had their wedding in 1979. Paphitis and his wife Debbie live in a beautiful house in Weybridge, Surrey. The couple has two sons and three daughters, including twins, and eight grandchildren. However, Paphitis attributes his success to his natural common sense, and his favourite motto is a famous business school motto: “KISS: Keep It Simple, Stupid”. He has said, “There are three reasons to be in business. To make money, to have fun, and to make money.”

How much is Theo Paphitis worth? Theo Paphitis net worth is estimated at around £300 million. His main source of income is from his career as an entrepreneur and investor. Paphitis successful career has earned him some luxurious lifestyles and some fancy cars trips. He is one of the richest and influential entrepreneurs in Cyprus. However, Paphitis voted for Brexit in 2016, describing the EU as a “failed experiment”. However, whilst appearing as a panelist on Question Time in October 2019, Paphitis said that he had changed his mind and supported a second referendum on Brexit, whilst still being a supporter of leaving the European Union.

14/02/2022
Read the write-up of Kate Hawkesby net worth, age, husband, children, height, family, parents, tv/radio shows as well as other information you need to...

“You can tell all the lies, but if the fundamentals of...

20/04/2022
ABOUT US
Our Motive is to provide reliable, accurate and informative news to you. The Urban and Rural at heart ❤️
Contact us: [email protected]
FOLLOW US
© Apumone 2022 All Rights Reserved
Go to mobile version