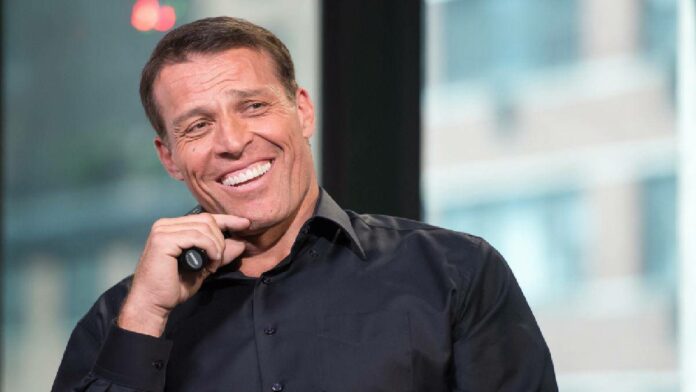 Tony Robbins is an American author, coach, speaker, and philanthropist. He is known for his infomercials, seminars, and self-help books including the books Unlimited Power (published in 1986) and Awaken the Giant Within (published in 1993).

Anthony Jay Robbins Mahavoric was born on February 29, 1960 (age 62 years) in North Hollywood, California, United States. Robbins is the eldest of three children, and his parents John Mohorovic and Nikki Robbins divorced when he was seven. He is of Croatian heritage from both sides of his family. His mother then remarried several times, including a marriage with Jim Robbins, a former semi-professional baseball player who legally adopted Anthony when he was 12.

Robbins grew ten inches, a growth spurt later attributed to a pituitary tumor during high school. He has said his home life was “chaotic” and “abusive”. When he was 17 years old, he left home and never returned. Robbins later worked as a janitor and did not attend college.

Tony Robbins began promoting seminars for motivational speaker and author Jim Rohn when he was 17 years old. In the early 1980s, Robbins, a practitioner of neurolinguistic programming (NLP) and Ericksonian hypnosis, partnered with NLP co-founder John Grinder. He subsequently learned to firewalk and incorporated it into his seminars.

Robbins joined a group of investors to acquire rights to launch a Major League Soccer franchise in Los Angeles referred to as the Los Angeles Football Club in 2014. The soccer team entered the competition in 2018. He partnered with Golden State Warriors co-owner Peter Guber and Washington Wizards co-owner Ted Leonsis to purchase Team Liquid, an eSports professional gaming organization in 2016. Robbins has worked on an individual basis with Bill Clinton, Justin Tuck, Hugh Jackman, and Pitbull. He has counseled American businessmen Peter Guber, Steve Wynn, and Marc Benioff.

Check Out: Gary Vee net worth

He was criticized for comments alluding to the Me Too movement at a seminar in San Jose, California, on March 15, 2018, when he said: “If you use the #MeToo movement to try to get significance and certainty by attacking and destroying someone else… all you’ve done is basically use a drug called significance to make yourself feel good.” He went on to tell a story about a “very powerful man” who passed on hiring a female candidate even though she was the most qualified because she was too attractive and would be “too big a risk”. He later posted an apology on his Facebook page.

In July 2010, NBC debuted “Breakthrough with Tony Robbins”, a reality show that followed Robbins as he helped the show’s participants face their personal challenges. NBC canceled the show after airing two of the planned six episodes due to low viewership of 2.8 million. In March 2012, the OWN Network picked up the show for another season beginning with the original first season set to re-run and thereafter leading directly into the new 2012 season. In April 2012, Robbins began cohosting Oprah’s Lifeclass on the OWN Network.

In 2015, filmmaker Joe Berlinger directed and produced the documentary Tony Robbins: I Am Not Your Guru, about the Tony Robbins event “Date with Destiny” after filming it in Boca Raton, Florida, in December 2014. It premiered at the South by Southwest film festival in March 2016. The documentary was translated into languages for 190 countries and released by Netflix on July 15, 2016.

Tony Robbins Research International (RRI) settled with the Federal Trade Commission over alleged violations of the agency’s Franchise Rule in May 1995. Under the settlement, RRI did not admit to having violated any law but agreed to pay $221,260 in consumer redress. Wade Cook sued Tony Robbins for allegedly using copyrighted terms from Cook’s book Wall Street Money Machine in his seminars. In 2000, a jury awarded Cook a $655,900 judgment, which was appealed. Cook and Tony Robbins settled for an undisclosed amount.

In 2001, the British Columbia Supreme Court ruled that The Vancouver Sun had defamed Robbins when it called him an “adulterous, wife-stealing hypocrite”. The court awarded Robbins $20,000 in damages and his legal costs.

In July 2012, the San Jose Mercury News published a story reporting that multiple people had been burned and hospitalized during one of Robbins’s fire-walking events on July 19, 2012. This story was picked up by other media outlets, including Fox News, The New York Times, and CNN. Aspects of these reports were later challenged by Robbins himself along with some of the on-site medical professionals.

On June 24, 2016, it was reported that “dozens were burned and required medical attention after attempting to walk on hot coals during a fire-walking event at a Tony Robbins seminar in Dallas, Texas”. Several attendees were transported to medical facilities to treat burns, and a bus was used as a staging area for between 30 and 40 people who were less seriously hurt. A spokeswoman for the Robbins organization stated, “Someone unfamiliar with the process of the fire-walk called 911 reporting the need for emergency service vehicles there was no need for emergency personnel only 5 of 7,000 participants requested an examination beyond what was readily available on site.”

In May 2019, an investigation by BuzzFeed News detailed accusations against Robbins of his sexual harassment of fans and staff members, such as groping fans at events, exposing his genitals to his assistants, and sexually harassing fans. As of that time, nine women had publicly accused Robbins of sexual misconduct.

Tony Robbins denied the allegations and also stated, “I have been the target of a year-long investigation by BuzzFeed. Unfortunately, your organization has made it clear to my team that you intend to move forward with publishing an inaccurate, agenda-driven version of the past, pierced with falsehoods.”

Check Out: Grant Cardone net worth

In November 2019, BuzzFeed News published a six-part article accusing Robbins of molesting a teenage girl during his time as a “star speaker” at SuperCamp, an elite summer camp in southern California. The article claims the events took place in 1985 when Robbins was 25, and that there were at least two eyewitnesses. Other media outlets also reported on these allegations. Robbins denied wrongdoing and filed suit on BuzzFeed News in Ireland. In response, BuzzFeed News said that they stand by their reporting and suggested that Robbins’s decision to file the summons in Ireland was an “abuse” of the Irish court.

Tony Robbins founded the Anthony Robbins Foundation in 1991 intended to help the young, the homeless, the hungry, the elderly, and the imprisoned. Independent charity watchdog Charity Navigator gave the foundation a rating of four out of four stars in 2017.

In 2014, he donated the profits of his book, Money: Master the Game, along with an additional personal donation, through Feeding America to provide meals to people in need. Robbins works with a water company called Spring Health, which provides fresh water to small villages in rural eastern India to prevent waterborne diseases.

Robbins helped raise money for Operation Underground Railroad, a nonprofit organization that works with governments to fight against child trafficking and slavery with the assistance of former CIA, Navy SEALs, and Special Ops operatives.

Tony Robbins is married to Sage Robbins, they had their wedding in October 2001. His wife Sage’s other names are Bonnie and Humphrey. However, in 1984, Tony Robbins married his first wife Rebecca “Becky” Jenkins after meeting her at a seminar. Becky Jenkins had three children from two former marriages, whom Robbins adopted. Robbins and Jenkins filed for divorce in 1998. In 1984, Robbins fathered a child with former girlfriend Liz Acosta. Their son, Jairek Robbins, is also a personal empowerment coach and trainer. They live in a private house in Manalapan, Florida.

How much is Tony Robbins worth? Tony Robbins net worth is estimated at around $650 million. His main source of income is from his career as an entrepreneur, investor, author, coach, speaker and vlogger. Robbins successful career has earned him some luxurious lifestyles and some fancy cars trips. He is one of the richest and influential people in the United States. However, Robbins was a vegan for 12 years, he then added fish to his diet. Whilst eating a fish-heavy diet he developed mercury poisoning and nearly died. His diet now consists of mostly vegetables with a small amount of animal protein.