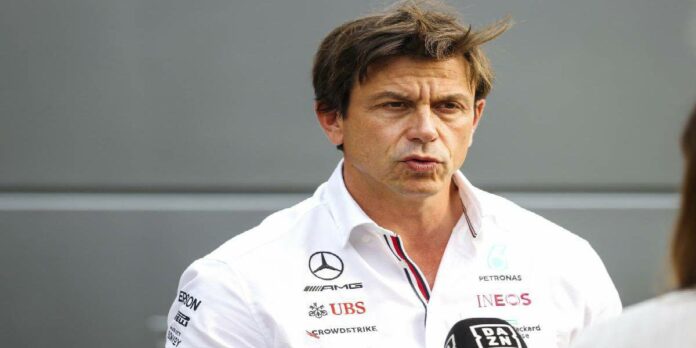 Read the complete write-up of Toto Wolff net worth, salary, age, height, parents, family, wife, children, education, a racing career as well as other information you need to know.

Toto Wolff is an Austrian motorsport executive, investor and former racing driver. He holds a 33% stake in the Mercedes-AMG Petronas F1 Team and is Team Principal and CEO of the team.

Wolff was awarded an Honorary Doctorate from Cranfield University for his services to Motorsport in May 2021. He specialises in strategic investments in medium-sized industrial and listed companies, which have included Williams F1 and German HWA AG.

Torger Christian “Toto” Wolff was born on January 12, 1972 (age 50 years) in Vienna, Austria. His are parents’ descents are of a Polish mother and a Romanian father. His mother was a physician. He grew up in the city and was educated in a French school there, despite not coming from a wealthy family. Wolff’s father was diagnosed with brain cancer when he was eight years old. His parents separated following his father’s diagnosis. His father died of the disease during Wolff’s adolescence.

Wolff was runner up in the Austrian Rally Championship in 2006, and the winner of the 2006 Dubai 24 Hour. Wolff has also served as an instructor at the Walter Lechner Racing School and in 2009 became a lap-record holder on the Nürburgring Nordschleife in a Porsche RSR. Wolff also has overall responsibility for the Mercedes EQ Formula E Team.

In 2009, Wolff bought a share of the Williams Formula One Team and joined the board of directors. In 2012, he was named executive director of Williams F1 and the team took its last race win to date at that year’s Spanish Grand Prix with Pastor Maldonado.

In January 2013, Wolff left Williams F1 to become an executive director of the Mercedes AMG Petronas Formula One Team, with his business partner Rene Berger becoming a non-executive director. In addition to joining the team as managing partner, he also acquired 30% of Mercedes-Benz Grand Prix Ltd, with a further 10% held by Niki Lauda and 60% by the parent company.

Wolff took over the coordination of all Mercedes-Benz motorsport activities, a responsibility previously held by Norbert Haug. In 2014, Wolff sold two-thirds of his Williams shares to American businessman Brad Hollinger. On 9 March 2016, Wolff sold his remaining shares in the Williams team.

As co-owner of both WilliamsF1 (where wife Susie worked as a test driver until November 2015) and Mercedes Grand Prix, Wolff celebrated numerous podiums and successes for both teams, such as a 1–2–3–4 finish at Spielberg, Austria in his ‘home race’, as well as at Monza, Italy, in both Qualifying and Race classifications.

Check Out: Top 5 Richest rappers in the world

In 2020, Mercedes’ record of seven consecutive Constructor’s Championships surpassed that of Ferrari’s six consecutive Constructor’s Championships set between 1999 and 2004. Wolff’s achievements were recognised through the presentation of a John Bolster Award from Todt at the 2018 Autosport Awards. Wolff subsequently received the President’s Award from Todt, along with team non-executive chairman Niki Lauda, at the 2018 FIA Prize Giving Gala held in St Petersburg, Russia.

2018 proved the most successful motorsport year in the history of Mercedes-Benz. The company won both F1 titles, F2 with George Russell, European F3 with Mick Schumacher, all three titles in its final season of DTM competition with Gary Paffett securing the drivers’ title, both F1 eSports titles and numerous championships in customer racing.

For 2019, Mercedes continued its run of success by securing a sixth consecutive double world championship at the Japanese GP, when the team secured the Constructors’ title and only one of Lewis Hamilton and Valtteri Bottas could still become Drivers’ champion. This is an unprecedented achievement in the history of the sport. As of 2019, Wolff is the only Team Principal who has won more than five consecutive double world championships.

Since the introduction of the turbo-hybrid regulations in 2014, Mercedes has won 108 of 154 races under Wolff’s leadership. The team has taken 114 of 154 pole positions, 72 front-row lockouts and 224 from 308 possible podium finishes. Since Wolff joined Mercedes in 2013, the team has achieved a winning percentage of 64%.

Following the end of the 2020 F1 season, Wolff signed a new deal with Mercedes which would see him stay on as team principal and CEO for another 3 years.

Toto Wolff founded investment companies in Marchfifteen (1998) and Marchsixteen (2004), both of which initially focused on internet and technology company investments. Since 2003, Wolff has concentrated on strategic investments in medium-sized industrial and listed companies. Investments included the German HWA AG, in which Wolff bought a 49% stake in 2006 listing the company on the stock exchange in 2007. The company ran the Deutsche Tourenwagen Masters race program for Mercedes-Benz, developing F3 engines and the Gullwing Mercedes-Benz SLS AMG GT3 racing car.

Other investments included BRR Rallye Racing, one of the largest rally parts dealers in Europe. Wolff is also co-owner of a sports management company with former F1 driver Mika Häkkinen and was involved in the management of racing drivers such as Bruno Spengler, Alexandre Prémat and Valtteri Bottas. In April 2020, Wolff acquired a 4.95% stake in Aston Martin Lagonda Global Holdings plc as a financial investment, which subsequently diluted to less than 1%. Wolff’s partnership and operational role with Mercedes were unaffected by this transaction. In June 2020, Wolff held a 5% stake in Williams F1 which was sold in the purchase of Williams by Dorilton Capital.

In August 2021, it was incorrectly speculated by tabloid Le Journal de Montréal that Toto Wolff and Aston Martin F1 boss Lawrence Stroll were involved in insider trading with respect to Aston Martin shares, something Wolff contradicted in comments provided to the same newspaper. This allegation was proven to be unfounded following confirmation from respectively the BaFin in Germany and the FCA in the UK that they had found no evidence of wrongdoing.

Toto Wolff is also a Director and CEO of the Mercedes EQ Formula E Team and occasionally attends Formula E races. In August 2021, Wolff was present in Berlin as Mercedes won both the drivers’ and teams’ championships in Formula E, at a race won by Venturi driver Norman Nato, where Susie became the first female team principal to stand on the podium at a world championship motor race. With Venturi driver Edo Mortara finishing second in the drivers’ championships, the Wolffs led their respective teams to first and second positions in the Formula E driver’s championship.

Wolff is vice chairman of the Mary Bendet Foundation, founded in memory of a school friend who was a role model for a generation of friends. The Foundation’s aims are to improve the quality of life for underprivileged children.

Toto Wolff is married to Susie Stoddart Wolff, they had their wedding in 2011. Wolff lives with his second wife Susie Wolff, his wife is the ROKiT Venturi Racing Team Principal in Monaco. He proposed on a boat to the airport in Venice. They married in October 2011. On 11 April 2017, Susie announced on Twitter that she had given birth to their first child the previous day. He has two children from his first wife Stephanie Travers.

How much is Toto Wolff worth? Toto Wolff net worth is estimated at around $500 million. His salary for 2022 is around $10 million and his main source of income is from his investments in racing sports. Wolff’s successful career has earned him some luxurious lifestyles and some fancy cars. He is one of the richest racing drivers in the world. However, He speaks fluent German, English, French, Italian, and Polish.