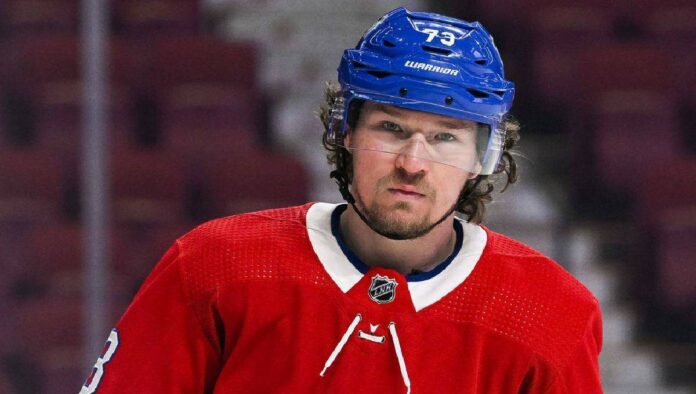 Tyler Toffoli is a Canadian professional ice hockey right winger for the Calgary Flames of the National Hockey League (NHL). He was drafted by the Los Angeles Kings in the second round, 47th overall, of the 2010 NHL Entry Draft.

Tyler Toffoli was born on April 24, 1992 (age 30 years) in Scarborough, Ontario, Canada. He is the son of Rob Toffoli and Mandy Toffoli. He has two older sisters Megan Toffoli and Courtney Toffoli. His father Rob was also involved in hockey and was the general manager of the Toronto Jr. Canadiens while Toffoli played with them. Growing up, Toffoli attended Birchmount Park Collegiate Institute in Toronto (into which Scarborough had amalgamated in 1998) and Hillcrest High School in Ottawa.

Toffoli signed a three-year entry-level contract with the Kings on April 19, 2011. He played that season with the 67s before joining the Manchester Monarchs in the American Hockey League to begin his professional career.

On March 16, 2013, Tyler Toffoli made his NHL debut in a 5–2 win over the San Jose Sharks. Toffoli scored his first career NHL goal on goaltender Mike Smith in his second NHL game in a 4–0 victory over the Phoenix Coyotes on March 18, 2013.

On April 12, 2013, Toffoli was named the recipient of the AHL’s Dudley “Red” Garrett Memorial Award for rookie of the year in the 2012–13 season. He scored 28 goals and 20 assists (48 points) in 55 AHL games for Manchester during the season, and upon the announcement, Toffoli led all rookies in goals, short-handed goals (3) and plus-minus (+20).

Check Out: Nick Suzuki net worth

Tyler Toffoli made his Stanley Cup playoff debut on May 8, 2013, in Game 5 of the Western Conference Quarterfinals against the St. Louis Blues, replacing scratched Keaton Ellerby in the Kings’ lineup.

To begin the 2013–14 season, the Kings assigned Toffoli to their AHL team in Manchester. On November 9, in his third game since being recalled to the NHL with Manchester linemate Linden Vey, Toffoli scored two goals and one assist in Los Angeles’ 5–1 victory over the Vancouver Canucks, the first three-point game of his NHL career.

Toffoli then contributed another two-goal performance, including the eventual game-winner, against the St. Louis Blues, on December 2 in a 3–2 Kings victory. The game-winning goal marked his fourth in 14 games since he had been recalled from the Monarchs. Toffoli was a key contributor in the playoffs and went on to win a Stanley Cup.

In the 2014–15 season, Toffoli played a majority of the season with Jeff Carter and Tanner Pearson on a line dubbed “That 70s Line” because all three wore numbers in the 70s. During the 2014–15 season, on January 9, 2015, Toffoli was diagnosed with mononucleosis, forcing him to miss six games before rejoining the lineup on January 31 against the Chicago Blackhawks. He scored his first career NHL hat-trick on February 12 in the Kings’ 5–2 victory over the Calgary Flames.

During the 2016–17 NHL season, Tyler Toffoli suffered a left knee injury, forcing him to miss 19 games. He underwent successful surgery on April 25. On June 7, 2017, the Kings signed Toffoli to a three-year, $13.8 million extension, with an annual average of $4.6 million.

Tyler Toffoli became the first player in league history to record a hat-trick in an outdoor game on February 15, 2020, when the Kings defeated the Colorado Avalanche 3-1 during the 2020 NHL Stadium Series. The game was played at Falcon Stadium in Colorado Springs, Colorado.

Tyler Toffoli was traded by the Kings to the Vancouver Canucks on February 17, 2020, in the final season of his contract, in exchange for Tim Schaller, Tyler Madden, a 2020 second-round pick, and a 2022 conditional pick. Toffoli found success on the Canucks’ top line alongside J.T. Miller and Elias Pettersson, putting up 10 points in 10 games, including six goals. When the NHL season resumed for the playoffs, Toffoli would suffer a high-ankle sprain in Game 1 of the qualifying series against the Minnesota Wild.

Toffoli wouldn’t return to the lineup until August 25, 2020, in time for Game 2 of the second-round series against the Vegas Golden Knights. Toffoli contributed a goal and two assists in his return to the lineup as the Canucks tied the series. However, he had just one goal the rest of the series as the Canucks bowed out in seven games. Despite the Canucks having traded for Toffoli, the team’s general manager, Jim Benning, did not attempt to re-sign him.

Tyler Toffoli signed a four-year, $17 million contract with the Montreal Canadiens on October 12, 2020. In his first game against the Canucks on January 20, Toffoli recorded a hat-trick in a 6–5 shootout loss for the Canadiens. Toffoli managed 28 goals and 16 assists in 52 games during the pandemic-shortened 2020–21 season, the seventh-best goal tally for a player in the NHL that season.

Toffoli continued to enjoy success during the Canadiens’ deep run during the playoffs, notably scoring the series-winning goal in the team’s second-round against the Winnipeg Jets. Toffoli played in his second Stanley Cup Final, though he was struggling with a groin injury by the end of the playoffs and did not register any points in his final six games.

While the Canadiens had a historically poor start to the 2021–22 season, Tyler Toffoli recorded five goals and 12 assists in his first 26 games, jockeying for the overall points lead with Nick Suzuki. On December 11, it was announced that Toffoli had undergone hand surgery and was expected to miss eight weeks. However, due to a faster than expected recovery, Toffoli returned only a month later, managing a goal and an assist in a 5–3 victory over the Dallas Stars.

Check Out: Sean Monahan net worth

With the team under the new management of Jeff Gorton and Kent Hughes, there was increasing speculation Toffoli would soon be traded as part of a rebuild. Speaking on the subject, Toffoli said, “I’ve been traded before and I know better not to get caught up in the rumours. Whatever direction they feel they want to go in, I want to be part of it.” Following his subsequent trade, teammate Nick Suzuki commented “it’s tough to lose a good friend and good teammate.”

On February 14, 2022, Tyler Toffoli was traded to the Calgary Flames for Tyler Pitlick, Emil Heineman, a first-round pick in 2022, and a fifth-round pick in 2023. The trade reunited him with former Kings coach Darryl Sutter and past teammates Trevor Lewis, Milan Lucic, Sean Monahan, Chris Tanev and Jacob Markström. Making his Flames debut on February 15, he scored his first goal with the team that night in a 6–2 rout of the Columbus Blue Jackets.

Tyler Toffoli is married to his longtime girlfriend Cat Belanger, they had their wedding in 2018. His wife is a private person and they had their engagement in 2017. The couple has no children but has a beautiful dog named Dodger. Toffoli’s salary for 2022 ranges from $4.8 million to $5 million but with bonuses, benefits and various other compensation, he made significantly more than his salary in the year 2019.

How much is Tyler Toffoli worth? Tyler Toffoli net worth is estimated at around $10 million. His main source of income is from his career as an ice hockey player. Toffoli successful career has earned him some luxurious lifestyles and some fancy cars. He is one of the richest and influential ice hockey players in Canada.

10/03/2022
ABOUT US
Our Motive is to provide reliable, accurate and informative news to you. The Urban and Rural at heart ❤️
Contact us: [email protected]
FOLLOW US
© Apumone 2022 All Rights Reserved
Go to mobile version
We use cookies to ensure that we give you the best experience on our website. If you continue to use this site we will assume that you are happy with it.Ok