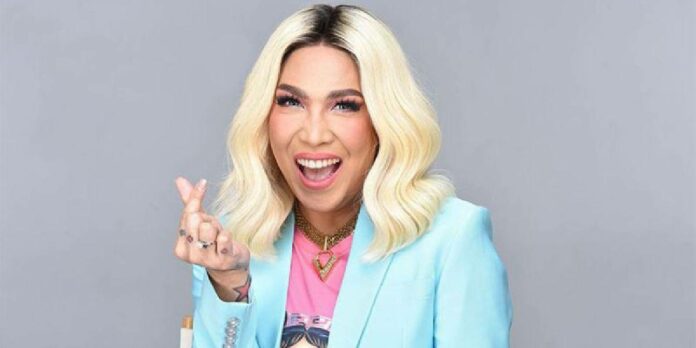 Vice Ganda is a Filipino comedian, talk show host, television presenter, actor, entrepreneur, and singer. He is a regular host on ABS-CBN’s noontime variety show It’s Showtime and has starred in several films, eight of which are considered to be the highest-grossing in Philippine cinema.

During his stand-up routines, Vice Ganda uses observational comedy, situational irony and sarcasm in pertaining to Filipino culture and human sexuality. He is also the first openly LGBTQ endorser for Globe Telecom.

Vice Ganda who real name is Jose Marie Borja Viceral was born on March 31, 1976 (age 45 years) in Tondo, Philippines. Before coming out to his family and loved ones, Vice Ganda was known as “Tutoy”, which was his nickname as a young boy. The youngest of five children, Vice Ganda grew up in the neighbourhood along José Abád Santos Street in Manuguit, Tondo, Manila.

His father Reynaldo Viceral, a native of Taysan, Batangas and a barangay captain in Tondo, Manila, was murdered when he was young, prompting his mother Rosario Viceral, an Ilocana from San Juan, La Union, to leave her children to work abroad as a caregiver. He studied political science at Far Eastern University.

Vice Ganda started out as a singer, then as a comedian for Punchline and The Library, whose owner Andrew de Real gave him the stage name “Vice Ganda”. There he spent several years developing his material in the comedy clubs. His career began to build after appearances on television and reviews from tabloid columns. He works alongside fellow comedians Chokoleit, Pooh, John Lapus and Rey Kilay.

Ganda appeared in several television series and sitcoms such as Dyosa, under the direction of Wenn V. Deramas. He also had another supporting role in the drama series Maging Sino Ka Man: Ang Pagbabalik. In 2009, Vice Ganda became part of Showtime, a talent search program where he eventually gained his present role as a regular presenter/judge.

His life story of being bullied as a young, closeted homosexual has also been featured in the drama anthology, Maalaala Mo Kaya. Aside from Showtime, he is currently hosting his own Sunday talk show, the consistently top-rated Gandang Gabi, Vice!.

Currently, Vice Ganda is under the management of ABS-CBN, and handling him is business unit head Deo Endrinal after being managed for four years by local entertainment columnist/host Ogie Diaz. In 2016, he became one of the judges in Pilipinas Got Talent.

Before venturing into mainstream movies, Vice Ganda starred in minor roles in independent films such as Condo with Coco Martin and In My Life, where he appeared alongside Vilma Santos and John Lloyd Cruz. In 2010, he starred in a remake of the comedy film, Petrang Kabayo, which was an instant hit at its release. The following year, he starred in Praybeyt Benjamin with Derek Ramsay, directed by Wenn V. Deramas. The movie became the first local film to reach 300 million pesos in ticket sales and proved to be an even greater box office success than Petrang Kabayo.

In 2012, Vice Ganda starred in the Filipino comedy film This Guy’s in Love with U Mare! under Star Cinema and Viva Films, alongside Luis Manzano and Toni Gonzaga, directed by Wenn V. Deramas. In 2013, he made another movie called Girl, Boy, Bakla, Tomboy. In 2014, Star Cinema released a movie called The Amazing Praybeyt Benjamin an official entry for the MMFF 2014. Vice Ganda participated alongside actress Alex Gonzaga, and actors Richard Yap and James “Bimby” Aquino-Yap. The film was directed by Wenn V. Deramas.

In 2015, Star Cinema released Beauty and the Bestie, an official entry for the MMFF 2015, directed by Wenn V. Deramas. He participated alongside actor Coco Martin, Kapamilya loveteam James Reid and Nadine Lustre, actors Marco Masa and Alonzo Muhlach, and comedians MC Calaquian and Lassy Marquez. In 2018 and 2019 respectively, Vice starred in 2 blockbuster movies, Fantastica and The Mall, The Merrier, with Dingdong Dantes and Richard Gutierrez in the former, and Anne Curtis in the latter. Vice Ganda is presently under contract with VIVA Films.

In 2011, Vice Ganda released his first studio album, Lakas Tama under Vicor Music. It features mostly pop and novelty songs, including “Palong Palo”, written by Callalily frontman Kean Cipriano. He is also included in the compilation album of Showtime, released by Star Records. In 2013, he released his 2nd album, self-titled, and debut album under Star Records. In 2014, Vice Ganda released his 3rd album, entitled #Trending, which featured the song Boom Panes and Push Mo Yan Teh!

Vice Ganda does not mind being addressed with either masculine or feminine pronouns, identifying as non-binary. He has advocated for queer rights and representation throughout his career.

Ganda reportedly suffered from depression due to career issues and personal problems. One of his biggest life inspirations is his teacher who told him to “always follow his dreams no matter how big or wild they are.” As of November 2019, he is in a relationship with Ion Perez, a member of the supporting cast on Its Showtime.

In May 2013, Vice Ganda was widely criticized for making several jokes about gang rape during his I-Vice Ganda Mo Ko! comedy concert show. One of them was directed towards respected news anchor Jessica Soho, whom he mentioned in a joke regarding several personalities starring in a hypothetical pornographic film. Philippine women’s rights group GABRIELA condemned the joke as being distasteful in light of rape victims.

GMA reporter Arnold Clavio, a colleague of Soho, defended the news anchor and expressed his disapproval of Vice Ganda’s body-shaming remark in one of the former’s radio programs. Although Vice Ganda initially defended his stance, saying that the brand of humour he uses is based on his roots doing stand-up in comedy bars and karaoke lounges, the comedian issued an apology over the issue during an episode of Its Showtime.

Actress Nora Aunor also took umbrage at Vice Ganda’s style of humour when she pulled out of her appearance as a special guest judge for the Tawag ng Tanghalan grand finals at the last minute. Aunor believed Vice Ganda’s brand of insult comedy was against her moral beliefs and was perturbed with the idea of being on the show alongside Vice Ganda.

On one of his daily comedic discussions following a performance by Gian Magdangal on Tawag ng Tanghalan: Celebrity Champions, Vice Ganda made a joke after the founder of Kingdom of Jesus Christ, Pastor Apollo Quiboloy, among other claims of being responsible for stopping calamities, claimed that he was responsible for stopping the earthquakes in Mindanao.

Check Out: Kris Aquino net worth

Vice Ganda jokingly challenged Pastor Quiboloy to stop one of the longest-running and undying ABS-CBN television series, Ang Probinsyano and the common Philippine problem which is the constant traffic on EDSA. Members of the Kingdom of Jesus Christ took offence and expressed their dismay for Vice Ganda. Radio broadcaster and SMNI anchor, Mike Abe, a friend of Quiboloy, defended the founder and launched his foul-mouthed tirade on Vice Ganda about the controversial “stop” joke on Quiboloy.
Two days after the joke, Quiboloy instead threatened that he will not only stop FPJ’s Ang Probinsyano but shut down ABS-CBN as a whole within 4 months.

Before saying these threats by Quiboloy, however, the company’s contract, originally expiring on March 30, 2020, ended on May 4, 2020, based on Justice Secretary Menardo Guevarra’s speech during the Senate hearing on alleged violations made by ABS-CBN. Two weeks after the shutdown of ABS-CBN, Quiboloy delivered the message to Vice Ganda on his show, Powerline, that he prophesized the network and Ang Probinsyano’s end. However, the show (Ang Probinsyano) and all ABS-CBN shows and programs are still ongoing on other TV stations and social media platforms.

On May 26, during the first hearing of ABS-CBN’s new 25-year franchise, Sagip Partylist Representative and Deputy Speaker Rodante Marcoleta presented videos showing Vice Ganda jokingly asking Pastor Apollo Quiboloy of the Restorationist church Kingdom of Jesus Christ to stop Ang Probinsyano. Marcoleta alleged that Vice Ganda’s statement was meant sincerely and that the challenge was accepted. Vice Ganda responded to Marcoleta via a Twitter post, claiming that it was a joke.

How much is Vice Ganda worth? Vice Ganda net worth is estimated at around $5 million. His main source of income is from his comedies career. Ganda successful career has earned him some luxurious lifestyles and some fancy cars. He is one of the influential comedians in the Philippines. However, as cited by Bautista (2012), researchers from the University of San Jose – Recoletos studied the role of sarcasm and criticism on Filipino humour. Half of the 100 participants stated that they gain more confidence from mimicking Vice Ganda’s style of humour, while 64% of the respondents said that they usually imitate Vice Ganda’s sarcasm during conversations.

03/02/2021
ABOUT US
Our Motive is to provide reliable, accurate and informative news to you. The Urban and Rural at heart ❤️
Contact us: [email protected]
FOLLOW US
© Apumone 2022 All Rights Reserved