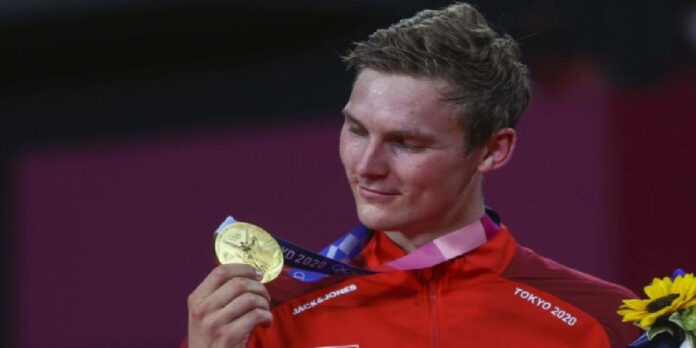 Read the complete write-up of Kento Momota net worth, age, height, family, wife, children, racket, badminton as well as other information you need to know.

Viktor Axelsen is a Danish badminton player. He is the 2017 World champion and the 2020 Olympic champion. He won the 2010 World Junior Championships, beating South Korea’s Kang Ji-Wook in the final to become the first-ever European player to hold the title. Axelsen was crowned European men’s singles champion in 2016 and 2018.

Viktor Axelsen was born on January 4, 1994 (age 28 years) in Odense, Denmark. He was six years old, when his father introduced him to badminton, playing the games at the Odense badminton club. He lived with his father after his parents divorced, then lived alone in Copenhagen at the age of 17 and joined the national team.

His father Henrik Axelsen ran a small advertising agency for a number of years, but now works full time as a manager for his son, and his mother Gitte Lundager has a shop in central Odense with a hairdressing salon, cosmetics and fashion clothing. He was named as 2004 Player of the Year by the Odense badminton club.

Viktor Axelsen achievements begin when he won the National junior event in the boys’ singles and doubles in his age group in 2006 and 2008. He later emerged victorious at the 2009 German Junior and also at the European U17 Championships. He made his debut in the senior international tournament at the 2009 Denmark Open played in the men’s doubles event with Steffen Rasmussen.

In January 2010, Axelsen who played from the qualification round manage to reach the finals at the Swedish International tournament, and finished as the runner-up after losing to Indra Bagus Ade Chandra in straight games 15–21, 12–21. He competed at the World Junior Championships in Guadalajara, Mexico, claimed the boys’ singles title by defeating the No.1 seed, China’s Huang Yuxiang in the quarterfinals, India’s B. Sai Praneeth in the semis and Kang Ji-Wook of Korea in the final.

Axelsen claimed his first international senior title in October 2010 at the age of just sixteen, winning the Cyprus International. A few weeks later he entered his first Super Series event in singles, the Denmark Open 2010; making it through the qualifying stages before losing out to compatriot and eventual winner Jan Ø. Jørgensen in the second round.

Viktor Axelsen moved to Valby, in Copenhagen, and started training at Brøndby elite centre in early 2012. Axelsen finished runner-up at the French Open in Paris, losing in the final to Daren Liew 18–21, 17–21. He also won a bronze medal at the 2012 European Championships losing the semi-final in three games to Sweden’s Henri Hurskainen 21–18, 18–21, 17–21.

Viktor Axelsen finished runners-up in 2015 at the Swiss Open Grand Prix Gold, three Super Series events India Open, Australian Open, and Japan Open. He qualified to compete at the Super Series Finals held in Dubai, and again finished as the runner-up. He featured in Denmark winning team at the European Mixed Team Championships in Leuven, Belgium. At the Sudirman Cup, the team that finished in the quarter-finals lost 2–3 to the Japanese team, where he played in the second match. He ended the 2015 season ranked as world number 6.

In 2016, Axelsen earned his first European crown in May 2016 beating compatriot and defending champion Jan Ø. Jørgensen with 21–11, 21–16 in the final of the 25th edition of the European Championships, the first in France at La Roche-sur-Yon. He was also part of the historic Danish team winning the first-ever Thomas Cup title in 2016.

He won five of his six played singles matches in the team tournament, also against Indonesia’s experienced player Tommy Sugiarto in the final (21–17, 21–18) setting up a dramatic and historic 3–2 victory for Denmark over Indonesia. In the 2016 Rio Olympics, he won the bronze medal by beating Lin Dan from China 21–15, 12–21, 21–17.

In 2017, Axelsen won the World Championship in Glasgow in two sets against Lin Dan (22–20, 21–16) and became the third Danish player to ever become a world champion (Peter Rasmussen 1997 in Glasgow & Flemming Delfs 1977 in Sweden). Axelsen, with a record of 4–3, is the only top twenty players to hold a winning record against Lin Dan, head-to-head.

Axelsen followed up his victory in Glasgow by winning the finals of the Japan Open tournament in Tokyo over Lee Chong Wei of Malaysia in three sets on 23 September, propelling him to the top of the BWF World Rankings.

Viktor Axelsen participated in the European Men’s and Women’s Team Badminton Championships in 2018 and got gold after suffering from a foot injury. He represented Denmark in the 2018 Thomas & Uber Cup. In the group stage, he defeated Vladimir Malkov from Russia and from Algeria. In the group stage match against Lee Chong Wei, he lost by two straight games 9–21, 19–21.

In the quarter-finals match against South Korea, he defeated Son Wan-ho, but he lost to the favourite and former world no. 2, Kento Momota in the semi-finals. Denmark was then eliminated in the semi-finals but not the defending champion of the 2016 Thomas & Uber Cup. In August, Axelsen was unable to defend his world title where he was defeated by two-time World Champion and reigning Olympic champion Chen Long in the quarter-finals.

Axelsen started the season by competing in Indonesia Masters. He finished as the semi-finalist after losing to the home player the seventh seed Anthony Sinisuka Ginting in two straight games. In February, he managed to defend his title in Barcelona Spain Masters after beating the Thai youngster Kunlavut Vitidsarn in straight games 21–16, 21–13. In March, he won the All England Open, making history as the first European and Dane to lift the men’s singles trophy since 1999.

Check Out: Kento Momota net worth

Viktor Axelsen participated at the European Mixed Team Championships in Finland and helped the team win the gold medal. In March, Axelsen entered the All England Open as the defending champion. He reached the final but lost to 6th seed Lee Zii Jia of Malaysia in a gruelling 3 set match (29-30, 22-20, 9-21). He then took part at the Kyiv European Championships, advanced to the final, but the organizers decided to cancel the finals since Axelsen tested positive for COVID-19.

Consequently, he was barred from playing the final match with his compatriot Anders Antonsen and was awarded a silver medal. He won the gold medal in the 2020 Olympic Games in Tokyo, Japan, beating Chen Long in straight games in the final and without dropping a single game in the entire tournament.

Viktor Axelsen is married to his longtime girlfriend Natalia Koch Rohde, they had their engagement in March 2021. His wife Natalia gave birth to a baby girl named Vega Rohde Axelsen on 15 October 2020. The couple lives in a private house in Odense.

How much is Viktor Axelsen worth? Viktor Axelsen net worth is estimated at around $7 million. His main source of income is from his career as a badminton player. Axelsen successful career has earned him some luxurious lifestyles and some fancy cars. He is one of the richest and influential badminton players in the world.