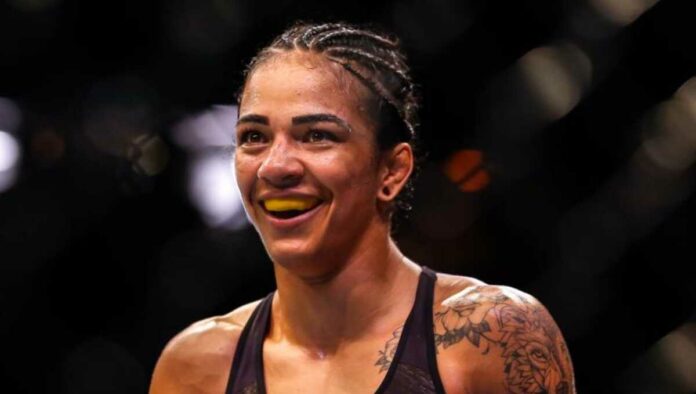 Viviane Araújo is a Brazilian mixed martial artist. She was the former Pancrase strawweight champion and currently competes in the flyweight division of the Ultimate Fighting Championship (UFC). As of July 18, 2022, she is #6 in the UFC women’s flyweight rankings.

Viviane Araújo Gomes was born on November 21, 1986 (age 35 years) in Ceilândia, Federal District, Brazil. She is the daughter of Brazilian parents who raised her along with her siblings. Araújo started playing soccer and spent much of her time away from home to forget about problems at home after witnessing her alcoholic father beating her mother on a daily basis.

Araújo later started Jiu-jitsu and fell in love with the sport after an invitation from Jiu-jitsu coach. She later became a Jiu jisu teacher and transitioned to mma as she was tired of watching her father abuse her mother. Araújo uses the octagon as the platform to voice her support to reach victims of domestic violence.

“The UFC is such a gigantic and powerful platform. A word from a woman can change your life and self-esteem. We have so many people going through things like that that I felt the need to talk about it. We’re suffering with domestic violence and violence against women. I lived that reality since I was a kid. I’ve suffered with that, and I managed to turn the table with sports. My mom is a warrior.”

Viviane Araújo fought most of her early MMA career primary in Brazil and Japan, notable under Jungle Fight and Pancrase where she was the formal Pancrase strawweight champion prior signed by UFC.

Check Out: Alexa Grasso net worth

Araújo faced Jessica Eye on December 14, 2019 at UFC 245. At the weigh-ins, Jessica Eye weighed 131 lbs., five lbs. over the Flyweight limit of 126 lbs. She forfeited 30% of her fight purse to Araújo. She lost the fight via unanimous decision.

She was scheduled to meet Jennifer Maia on June 27, 2020, at UFC on ESPN 11. However, the bout was rescheduled in mid-June to take place on August 1, 2020, at UFC Fight Night: Holm vs. Aldana after both participants faced travel restrictions related to the COVID-19 pandemic. Subsequently, Araújo was removed from the card in mid-July after testing positive for COVID-19 and replaced by Joanne Calderwood.

Check Out: Ariane Lipski net worth

Araújo faced Katlyn Chookagian on May 15, 2021 at UFC 262. She lost the bout via unanimous decision. Araújo was expected to face Alexa Grasso on January 22, 2022, at UFC 270. However, Araújo was forced to pull out form the event due to injury, and the bout was cancelled.

Viviane Araújo is currently not married. She hasn’t disclosed who her partner soon to be husband is. She has no kids from any previous relationships. Araújo stands at an appealing height of 1.65m and has a good body weight of 57kg which suits her personality. As of mid-2022, the UFC fighter is not married.

How much is Viviane Araújo worth? Viviane Araújo net worth is estimated at around $1.5 million. Her main source of income is from her career as a mixed martial artist. Araújo’s salary per month with other career earnings is over $400 thousand annually. Her successful career has earned her some luxurious lifestyles and some fancy car trips. She is one of the richest and most influential mixed martial artists in Brazil.