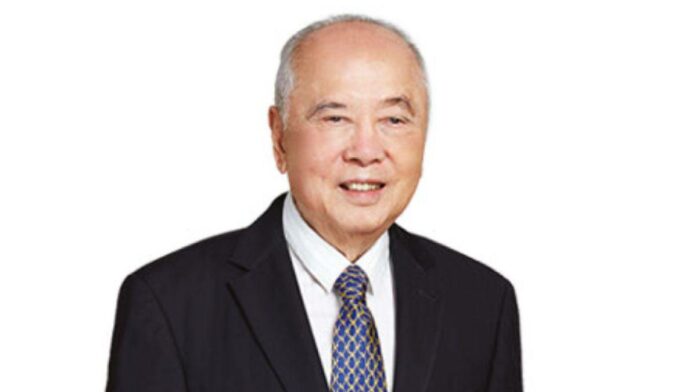 Wee joined the board of directors of the United Chinese Bank (now the United Overseas Bank) in 1958. He was appointed managing director of the bank two years later; and when his father Wee Kheng Chiang, founder of United Chinese Bank, retired in 1974, Wee succeeded him as chairman. His son Wee Ee Chong succeeded him as chief executive officer of UOB.

Wee Cho Yaw DUBC was born on January 10, 1929 (age 93 years) in Singapore. His mother was the second wife of Wee Kheng Chiang, a businessman operating in Sarawak who was a Hokkien from Kinmen island. In 1937, Wee and his family fled to Kuching in Borneo to escape the Sino-Japanese War. He lived with the family of his father’s first wife for about a year before moving to Singapore, where he attended Gong Shang Primary School and The Chinese High School.

Wee Cho Yaw started work at Kheng Leong in 1949, a business owned by his family that traded commodities such as rubber, pepper and sago flour. He stayed close to his father and learned the ways of business, taking on his millionaire father’s wide range of contacts and connections.

Wee became the youngest director on the board of United Chinese Bank (UCB) in 1958, which his father had founded in 1935. He then spent several months attached to a British bank in London to study its operations, before returning to work at UCB.

In 1960, his father Wee Kheng Chiang stepped down as managing director of UCB (while remaining as chairman), and Wee took over the post on 1 July. The bank had previously dealt only with local businesses, but Wee moved the bank into foreign exchange and international trade financing.

Check Out: Chatri Sityodtong net worth

In 1964 UCB applied to open a branch in Hong Kong and was renamed United Overseas Bank (UOB) in January 1965 to avoid a clash of names with an existing bank there. By this time, Wee Cho Yaw had grown the bank’s trade financing business more than a hundred-fold from before he took control of its operations. He had also raised its authorized capital and issued capital, grown its loans business and enlarged its assets nearly nine-fold.

Under Wee Cho Yaw’s direction, UOB expanded its branch network in Singapore and internationally, and further diversified into the finance business, property, insurance, realty, trustee and executor services, lease financing and merchant banking. The bank went public in 1970, and Wee was appointed vice-chairman a year later.

In June 1971, UOB acquired 49.8% of the Chung Khiaw Bank, and Wee made the newspaper headlines for sealing the deal for a bank that at the time had a larger asset base and a larger network of branches. The S$22 million deal saw UOB beat more than six rivals to the deal and doubled UOB’s size, creating the second-largest banking group in Singapore and Malaysia. Wee Cho Yaw later named the Chung Khiaw deal as one of his most important, as it marked UOB’s take-off into the wider Asian market.

In 1972, UOB was listed on the Hong Kong exchange and acquired Lee Wah Bank. Two years later, when his father retired as chairman of UOB, Wee Cho Yaw was his successor. By the end of the 1970s, Wee was also chairman of Haw Par Brothers International and the Chinese newspaper Sin Chew Jit Poh, and sat on the boards of the Development Bank of Singapore (DBS), Sime Darby and Straits Steamship Company.

The UOB group continued to grow in the 1980s, acquiring Far Eastern Bank and the Industrial and Commercial Bank. Wee took UOB into stockbroking, fund management and futures trading, and acquired property including hotels and shopping malls. The Business Times named Wee Singapore’s Businessman of the Year for 1990 and again in 2001, and the ASEAN Business Forum named him its ASEAN Businessman of the Year in 1995.

While a critic of the government’s plan to liberalize Singapore’s banking sector and allow foreign banks more market access in the 1990s, Wee restructured UOB’s operations to meet the increased competition and to continue the bank’s expansion in the region.

In June 2001, UOB acquired the Overseas Union Bank (OUB) in a S$10 billion cash-and-shares deal. Wee Cho Yaw was credited with a surer grasp of local business culture that allowed him to edge out the government-linked DBS, which also sought to acquire OUB. A day after DBS’s unsolicited bid for OUB, Wee visited OUB founder Lien Ying Chow and was able to convince the Lien family to sell their stakes to UOB. Wee later said in an interview that he would have bid for OUB regardless of Lien’s response, as the acquisition was vital to the survival of UOB.

In the mid-2000s, Wee Cho Yaw faced a challenge to maintain his family’s control over various companies in the UOB group amid a restructuring of the companies’ interlocking shareholdings. This situation arose after the government-mandated that banks would have to reduce their shareholdings in non-core businesses to stipulated levels.

As companies such as United Overseas Land (UOL), Overseas Union Enterprise (OUE), United Industrial Corporation (UIC) and Haw Par Corporation held stakes in UOB and vice versa, the loss of anyone would weaken the Wee family’s control of the group and even the core business of UOB. Wee however managed to fend off a bid for UOL from government investment company Temasek Holdings as well as maintain control of UIC, after Filipino billionaire John Gokongwei’s failed takeover attempt.

Wee Cho Yaw received the inaugural Credit Suisse-Ernst & Young Lifetime Achievement Award for his pioneering work in Singapore’s financial industry in November 2006. A newspaper report then named him the best paid local banking executive, with a remuneration of between S$9 million and S$9.25 million in 2006.

Wee stepped down as the bank’s chief executive officer and was succeeded by his eldest son Ee Cheong at UOB’s 65th annual meeting in April 2007. He remained as chairman of UOB, which he had grown into Singapore’s largest bank by market capitalization with more than 500 branches and offices in 18 countries.

Wee Cho Yaw is the honorary president at SCCCI. In 1972, he was head and spokesman of the ASEAN Chambers of Commerce and Industry. Wee also headed the Hokkien Huay Kuan (clan association) from 1972 to 2010 and was the founding president of the Singapore Federation of Chinese Clan Associations (SFCCA), an umbrella group for 190 associations, from 1985 to 2010. Wee was also a prime mover in the formation of the Chinese Development Assistance Council (CDAC) in 1992 and became chairman of its board of trustees.

In February 2009, the Wee Foundation was set up with an initial S$30 million endowment from the Wee family. The charitable foundation focuses on education and welfare for the under-privileged, and also promotes the Chinese language and culture as well as social integration. In August 2011, Wee received the Darjah Utama Bakti Cemerlang (Distinguished Service Order) in recognition of his work with the SFCCA and as pro-chancellor of NTU.

Wee Cho Yaw is still married to his longtime wife Chuang Yong Eng. Wee and his wife have six children together and six grandchildren. However, in 1971, the Singapore government awarded him the Bintang Masyarakat Bakti (Public Service Star), and he was named Singapore Businessman of the Year in 1990 and 2001. In 2006, for his contributions to the banking sector, he was presented with the inaugural Credit Suisse-Ernst & Young Lifetime Achievement Award. Wee received an honorary doctorate from the National University of Singapore in July 2008.

How much is Wee Cho Yaw worth? Wee Cho Yaw net worth is estimated at around $7.5 billion. His main source of income is from his career as a businessman and investor. Wee successful career has earned him some luxurious lifestyles and some fancy cars. He is one of the richest and most influential people in Singapore. However, Wee is the chairman of the joint School Management Committee for Chung Cheng High School (Main), Chung Cheng High School (Yishun) and Nanyang Junior College. He also holds the chairmanship of Singapore Hokkien Huay Kuan.