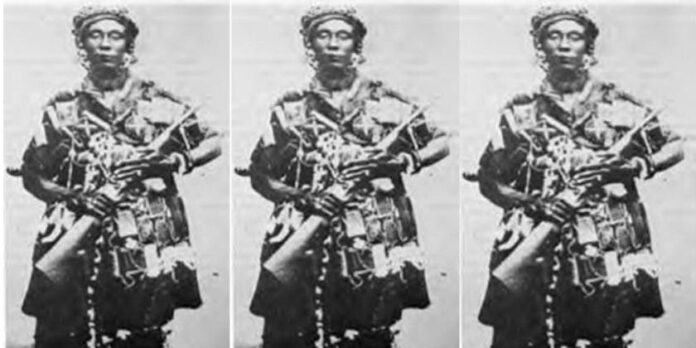 Yaa Asantewaa is highly regarded in the history of the Ashanti kingdom.

However, a recent revelation of the genuineness of the picture we have collectively accepted as the picture of Yaa Asantewaa is causing friction on social media.

History says Yaa Asantewaa was a warrior who fought war for the Ashantis as men did against colonial powers.

Accompanied to this history is a popular black and white photo of a woman in a war regalia holding a gun believed to be Yaa Asantewaa.

A page on twitter known as Asante Nation has tweeted the said picture of Yaa Asantewaa is not her but rather an America student who only depicted Yaa Asantewaa.

In a tweet, the page dedicated to promoting the culture of the Ashanti Kingdom wrote:

“An American Girl Theatre Arts Student poses as Yaa Asantewaa in a bulletproof war jacket and combat holding a gun and this image has gone all over the world with some people thinking that the picture is real Yaa Asantewaa.”