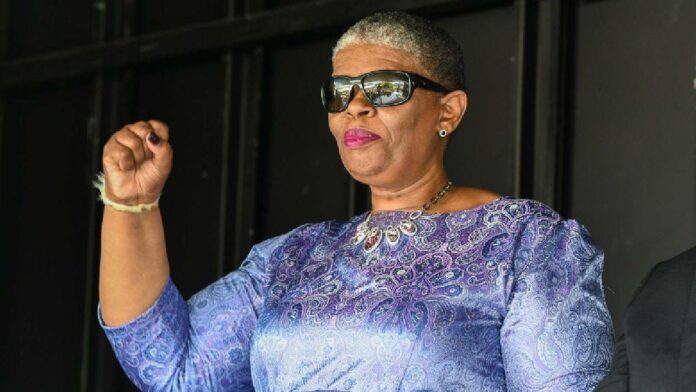 Zandile Gumede is a South African who has been serving as a Member of the KwaZulu-Natal Provincial Legislature since 2020. She served as the Executive Mayor of the eThekwini Metropolitan Municipality from 2016 until 2019. Gumede is a member of the African National Congress.

Zandile Ruth Thelma Gumede was born on May 12, 1961 (age 60 years) in Inanda, South Africa. She is one of thirteen children born to Mr and Mrs Majola. Her father was a police officer. Gumede attended Amaoti Primary, Okhozini Primary in Hammarsdale and JL Dube and Zwelibanzi Secondary Schools.

Zandile Gumede’s career included being a former ward councilor, executive committee member and chairperson of the Community and Emergency Services Committee. Gumede was elected as a proportional representative (PR) councilor for two terms before she became an Amaoti councillor. In the eThekwini Municipality, she was also elected as treasurer from 2007 to 2015.

Check Out: Bathabile Dlamini net worth

Zandile Gumede’s purchases of armored vehicles have raised concern by some critics. After nominating Mxolisi Kaunda in August 2019 as Durban’s new mayor, the ruling ANC begged Gumede to resign her mayoralty. On 26 August 2019, it was reported that the ANC had received Gumede’s resignation, but two days later Gumede withdrew her resignation. Her lawyers advised her to withdraw her resignation in light of the criminal charges she is facing.

On 19 August 2020, Zandile Gumede was sworn in as a Member of the KwaZulu-Natal Provincial Legislature, replacing Ricardo Mthembu, who died from COVID-19 in July. Opposition parties criticized her appointment, while Duduzane Zuma, son of former president Jacob Zuma, congratulated her.

On 14 May 2019, Zandile Gumede appeared in the Special Commercial Crimes court in Durban for multiple crimes relating to fraud and was released on R50,000 bail, pending further court appearances.

The ANC Youth League called for Gumede to resign as mayor because the bail conditions imposed by the court would not allow her to execute her mayoral functions, while the ANC Women’s League showed support for her to remain in office.

After the arrest of Zandile Gumede, the Hawks investigation officer in charge of this case was ambushed by three gunmen and was lucky to be alive after being injured. Her term as mayor came to an end when Mxolisi Kaunda was elected as Durban’s mayor on 5 September 2019.

However, Zandile Gumede was not found there and it was discovered that she had only rented the property and vacated it in July, subsequently changing addresses – a direct violation of her bail conditions. The Hawks and the NPA then moved to Gumede’s home in Inanda where they served her a court order to carry out the raids in relation to an R280 million tender scam within the Durban Solid Waste department.

Check Out: Julius Malema net worth

The raids were intended to seize R51 million in assets, including a number of luxury vehicles, including Porsches, Lamborghinis and Jaguar vehicles. Various homes, belonging to fifteen other co-accused individuals were also targeted during the raids. Footage of the raids went viral online.

On 30 November 2021, Zandile Gumede, along with 21 other individuals, is scheduled to appear at the Durban High Court for a pre-trial conference. The trial will cover charges of corruption, fraud and racketeering in relation to business tenders in the eThekwini Municipality. As of 29 March 2022, the case against Gumede and her co-accused continued, as they face more than 2000 charges.

Zandile Gumede is married to her longtime husband. She is a mother of four children and a grandmother of seven grandchildren. Gumede currently lives in a private house in Phoenix, South Africa. Zandile Gumede stands at an appealing height and has a good bodyweight that suits her personality.

How much is Zandile Gumede worth? Zandile Gumede net worth is estimated at around $5 million. Her main source of income is from her career as a politician and businesswoman. Gumede successful career has earned her some luxurious lifestyles and some fancy cars trips. She is one of the richest and most influential politicians in South Africa.

16/06/2021
Read the complete write-up of Bart Crow net worth, birthday, age, height, family, wife, house as well as other information you need to know. Introduction...

30/01/2022
ABOUT US
Our Motive is to provide reliable, accurate and informative news to you. The Urban and Rural at heart ❤️
Contact us: [email protected]
FOLLOW US
© Apumone 2022 All Rights Reserved
Go to mobile version