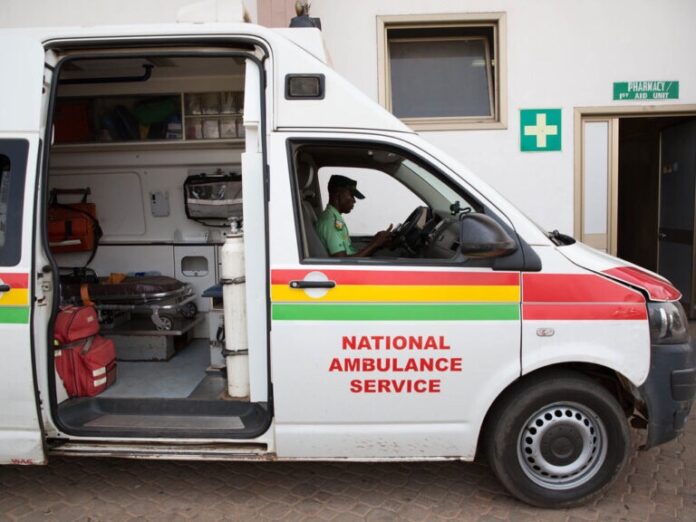 Highway robbers have shot a driver of an Ambulance rushing a pregnant woman in labour from the Akuse Government Hospital to the Eastern Regional Hospital in Koforidua.

The driver of the ambulance who was shot in the head is in critical condition and has ben referred from the Tetteh Quarshie Memorial Hospital to the Korle Bu Teaching Hospital.

The incident occurred Thursday dawn on the Somanya to Adukrom road.

Starr News has gathered that the driver in charge of Yilo Krobo Constituency Ambulance with registration Number GV 644-20 went to pick the woman who was at preterm labour (31 weeks) from Akuse government Hospital to Eastern Regional Hospital since Akuse Hospital has no neonatal intensive care unit (NICU).

However, the vehicle bumped into the robbery operation on the road while speeding and failed to stop. The armed robbers opened fire on the Ambulance shooting the driver in the head.

Police Patrol team rushed to the scene after the incident and conveyed the injured driver and the woman in labour to the Tetteh Quashie Memorial Hospital.

The acting Public Relations Officer of the Eastern Regional Police Command Sergeant Francis Gomado confirmed the incident when contacted. No arrest has been made yet.

The robbery attack is happening at the back of similar attack on three police officers – Sergeant Moses Tetteh Nartey, Corporal Christian Totimeh and Detective Ibrahim Apaka by highway robbers on Akyem Pramkese to Akyem Techiman road in Kwaebibirem District of the Eastern Region.

Sargeant Moses Tetteh Nartey died from two gunshot wounds on his chest and one on his head while Corporal Christian Totimeh also sustained a gunshot wound on his left rib now responding to treatment.