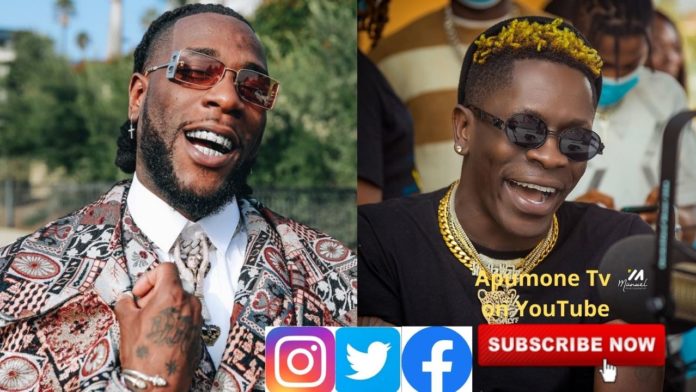 In an Instagram live video the “Hossana” hitmaker was reacting to some stuff he claimed Burna Boy has said to some people about him he was not happy.

In explaining what possible is the problem between him and Burna Boy, the Shatta Movement Boss said he only said in an interview at a time that Burna Boy his friend, do stay in his house and drive his cars anytime he’s in Ghana for a long stay.

Shatta Wale further added that he meant at no harm by saying and he wasn’t by any means acting as lord over Burna Boy. His explanation further added that whatevers he said was just meant to tell the true picture of how “boys have to be real with boys in hard times”
It looks as though Burna Boy after hearing that wasn’t happy and never visited Shatta Wale when he was in Ghana.

Wale said in the live video that he has since tried calling Burna Boy several times so they can iron out their differences about the whole issue but none of his calls since last year has been answered by the “On The Low” trailblazer Burna Boy.
In a plan language Shatta Wale said Burna Boy “should stop acting pu**y” because real street niggaz don’t behave as he is behaving.

If indeed he hears something from a source about him which is attributed to him, Shatta Wale, he expected that their long term friendship will let Burna Boy ask his side of the story before taking a decision to bad mouth him to other people around him Burna Boy. He added he is compelled to come out in this manner to spill the beans because people kept asking him about the issue and he needs to clear the air on that.
We wait to see if Burna Boy will respond to Shatta Wale