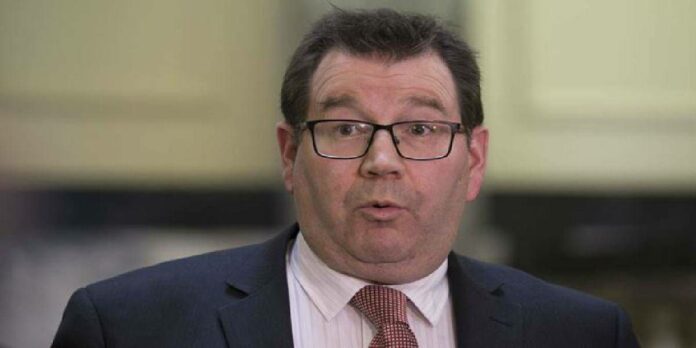 Read the complete write-up of Grant Robertson net worth, salary, age, height, family, partner, children, news as well as other information you need to know.

Robertson maintained and competed for several leadership positions during the party’s stint in opposition following the end of the Fifth Labour Government. He was elected Labour’s deputy leader in 2011, under leader David Shearer but also contested the leadership of the party in both the 2013 leadership election and the 2014 leadership election.

Grant Murray Robertson was born on October 30, 1971 (age 49 years) in Palmerston North, New Zealand. He is the youngest of three boys. His Presbyterian family also lived in Hastings before settling in South Dunedin. His father was an accountant, and his mother initially stayed at home, later becoming a teacher. In 1991, his father was imprisoned after stealing around $120,000 from the law firm he worked for. His grandfather Bob Wilkie ran unsuccessfully for Labour in the Wairarapa electorate in 1954 and 1957.

Grant Robertson joined the Ministry of Foreign Affairs and Trade in 1997 after leaving university. His overseas postings included the United Nations in New York. Robertson also managed the NZ Overseas Aid Programme to Samoa – a $7.7 million fund with projects in diverse areas such as basic education, healthcare, public sector capacity building, small business development and the empowerment of women. He left MFAT in 2001.

Robertson returned to New Zealand during the first term of the Fifth Labour Government to work as a Ministerial Advisor to Minister for the Environment Marian Hobbs and later Prime Minister Helen Clark. During his time in Clark’s office, Robertson was rumoured to have the nickname “H3” during the 2005 general election (H1 being Clark, and H2 being Clark’s Chief of Staff Heather Simpson).

After the 2005 election, Robertson left the Prime Minister’s office to work as the Senior Research Marketing Manager for the University of Otago based at the Wellington School of Medicine.

In late 2006, sitting MP for Wellington Central, Marian Hobbs announced that she would be retiring at the 2008 general election. Robertson was considered to be a front runner and was subsequently selected unopposed. Robertson ran a well-staffed campaign, based on local issues like the closure of the Crossways Community Centre and threats to the Public Service. He was also involved in the formation of a Wellington inner-city residents’ association. On 1 September 2008, the Labour Party published its list for the 2008 general election and ranked Robertson at number 46.

In the Wellington Central electorate, Robertson defeated National candidate Stephen Franks by 1,904 votes. Robertson’s plurality, although far less than the 6,180 vote difference held by his predecessor from the previous election, reflected a large swing in party votes to the National Party from Labour in the electorate and Robertson’s status as a non-incumbent candidate.

Helen Clark’s government was defeated in the 2008 election. Robertson was appointed as the opposition’s spokesperson for State Services, and associate spokesperson for Arts, Culture and Heritage and Foreign Affairs by new Labour leader Phil Goff.

In May 2010 Robertson’s Ethical Investment (Crown Financial Institutions) Bill was drawn from the member’s ballot. According to Robertson, the Bill “sought to have clear and consistent criteria for ethical investment in the legislation that govern our major investment funds such as the Super Fund and ACC.” Although the bill gained support from MPs in the Green and Māori parties, the Bill was defeated at its first reading.

On 15 June 2010, Opposition Leader Phil Goff appointed Robertson to be Portfolio Spokesperson for Tertiary Education and the 20th-ranked Labour MP, the highest of the 2008 intake of Labour MPs to be promoted at that point. In the election year reshuffle, on 2 February 2011, Robertson was further promoted to the front bench to take the Health portfolio. Commenting on the promotion, Phil Goff said that Robertson has “made a very strong impact in a very short time” and that he “has a promising future ahead of him.”

At the 2011 general election, Robertson re-contested Wellington Central against eleven other candidates. He subsequently was re-elected with 49.2 per cent of the electorate vote, increasing his majority to 6,376 over National Party candidate Paul Foster-Bell. However, the National Government was returned.

Following the election and Annette King’s resignation as Labour deputy leader, Robertson was elected by the Labour caucus as the new deputy leader under David Shearer. In Shearer’s shadow Cabinet, Robertson also served as Spokesperson for Employment, Skills and Training, and Arts, Culture and Heritage. Following Shearer’s resignation from the leadership in 2013, Robertson contested the party-wide leadership election.

Although Robertson achieved plurality support from his colleagues in Caucus, David Cunliffe garnered more support from party members and affiliates to win the overall vote. Under Cunliffe’s leadership, Robertson was the third-ranked Labour MP and held various portfolios including Spokesperson for Economic Development and Shadow Leader of the House.

Throughout 2014, Robertson was critical of National Party minister Judith Collins, after she was accused of having a conflict of interest in regards to her visiting the dairy products company Oravida in China. He repeatedly called for her to resign during the Oravida saga, and when Collins later released information to the media about One News journalist Katie Bradford, he reiterated his call for her to resign, claiming she had “lost all perspective”.

Grant Robertson was re-elected in the Wellington Central electorate in the September 2014 general election. The Labour Party performed poorly and leader David Cunliffe immediately came under pressure to resign. He was seen by some in the party as taking insufficient blame for the defeat. The leading challengers for the leadership were Robertson and David Shearer. Media reports suggest that some of the Labour caucuses were trying to get Cunliffe to resign so Robertson and Jacinda Ardern could replace the current leadership unopposed. On 26 September, the voting record in the previous leadership race of unions affiliated to Labour was released, showing Cunliffe had won very strong union support in the previous race, and highlighting the challenge for Robertson’s bid.

On 28 September, after Cunliffe had signalled his intention to resign, Robertson put his name forward to run for the Labour Party leadership. Robertson pointed to Labour’s poor performance in the election as leading him to run: “I couldn’t stand by and see the party poll at 24 per cent and not do something now that David’s triggered the contest. That’s why I’ve put my name forward.” He also argued that the Labour Party needed unity, and he would be a unifying figure, with the support of most of the Labour caucus. Because there were four candidates for the leadership, the Labour Party held a leadership election.

Robertson lost the leadership election to Andrew Little by a small margin, Little receiving 50.52 per cent of the vote to Robertson’s 49.48 per cent (after the votes from the other unsuccessful candidates had been reallocated) despite Robertson once again winning the support of most of the caucus, as well as a majority of the membership. After the results were announced, Robertson said he would not seek the Labour Party leadership again in the future.

In Andrew Little’s shadow cabinet reshuffle of November 2014, Robertson received the Finance portfolio and was ranked number 3 on the Labour list. As part of his Finance portfolio, he was engaged in researching international economic policy, and was also responsible for the Labour Party’s “Future of Work Commission.” His aims for the portfolio were to cut down on the number of policies, and “humanise” the policy.

Robertson was elected as a Cabinet Minister by the Labour Party caucus following Labour’s formation of a government with New Zealand First and the Greens. He was given the key role of Minister of Finance by Prime Minister Jacinda Ardern, and was also assigned the portfolio of Minister for Sport and Recreation, and appointed Associate Minister for Arts, Culture and Heritage.

On 27 June 2019, Robertson was appointed as Minister Responsible for the Earthquake Commission, succeeding Megan Woods.

As Finance Minister, Robertson has been a close confidante of Ardern. During the New Zealand government’s COVID-19 lockdown response, Robertson would sometimes deputise for Ardern at her daily press conferences. Their close working relationship has led some commentators to describe him as her “de facto political deputy,” over Labour Party deputy leader Kelvin Davis.

Grant Robertson is married to his longtime boyfriend Alf Kaiwai, they had their wedding in 2009. However, Robertson lives with his family in Northland, Wellington, with his partner Alf Kaiwai, whom he met through playing rugby together for the Wellington-based Krazy Knights, New Zealand’s first gay rugby team. After 10 years in a relationship, they held a civil union ceremony in January 2009. In his maiden statement (given on 9 December 2008), Robertson alluded to his sexuality as a part, but not the whole, of his identity:

I am proud and comfortable with who I am. Being gay is part of who I am, just as is being a former diplomat, a fan of the mighty … Wellington Lions, and a fan of New Zealand music and New Zealand literature. My political view is defined by my sexuality only inasmuch as it has given me an insight into how people can be marginalised and discriminated against, and how much I abhor that. I am lucky that I have largely grown up in a generation that is not fixated on issues such as sexual orientation. I am not—and neither should others be.

How much is Grant Robertson worth? Grant Robertson net worth is estimated at around $7 mllion, His salary is around $350,000 and his main source of income is from his political career. Robertson’s successful career has earned him some luxurious lifestyles and some fancy cars. However, in mid-February 2021, Robertson pulled out of his weekly interview slots with Peter Williams’ Magic Talk radio show after Williams questioned him about his views on the implications of the World Economic Forum’s Great Reset for New Zealand. Robertson reportedly stated that he would no longer appear on the show since he did not want to “shoot down conspiracy theories.”