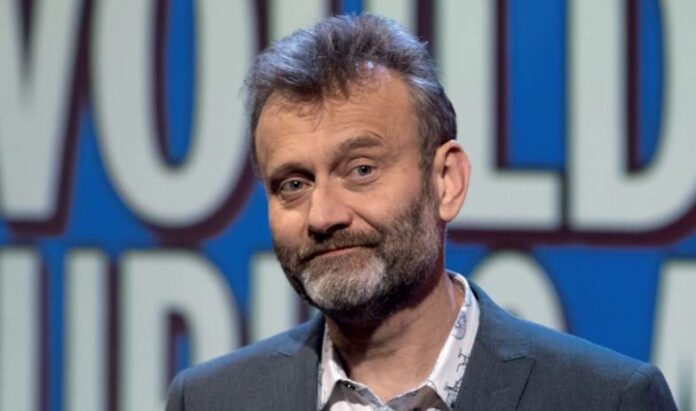 Hugh Dennis is an English comedian, presenter, actor, writer, impressionist and voice-over artist, who is one half of Punt and Dennis with comedy partner Steve Punt.

He played Pete Brockman, the father in the BBC One sitcom Outnumbered and since 2014 he has played Toby in the long-running sitcom Not Going Out. Since 2005, Dennis has been a regular panellist on the BBC Two satirical comedy show Mock the Week.

Peter Hugh Dennis was born on February 13, 1962 (age 60 years) in Kettering, Northamptonshire, United States. He is the younger son of schoolteacher Dorothy Mary (Hinnels) and John Dennis. His brother, also named John Hugh, was the British Ambassador to Angola from 2014 to 2018. He grew up in Mill Hill in North London as his father was appointed as Vicar of John Keble Church, Mill Hill soon after his birth. His father later became the Bishop of Knaresborough and then of Saint Edmundsbury and Ipswich.

Hugh Dennis was educated at University College School in London. During his time at UCS, he played rugby with Will Self and was head boy in his final year. In July 2008, Dennis received an Honorary Fellowship from the University of Northampton.

Dennis went on to read for the Geographical Tripos as an exhibitioner at St John’s College, Cambridge. His dissertation was titled “The Spatial Distribution of Elementary Education in 19th-century Wakefield”. He also joined the Footlights, where he first met Punt and club president Nick Hancock and the trio collaborated on a number of projects besides the annual revue.

In a 2016 interview with ITV’s This Morning programme, Dennis said that he was approached by Britain’s domestic intelligence service, MI5, whilst at Cambridge University and attended a preliminary interview; however, he eventually decided that he did not want to take the matter any further, particularly due to being told during the interview that the job would require him to “do people over”.

After graduating with a first (his nickname was “Desk”), Dennis worked for Unilever for six years in the marketing department while performing comedy with Punt at venues including The Comedy Store at weekends. The duo then formed half of the team of The Mary Whitehouse Experience on BBC Radio 1. When the BBC commissioned the series for BBC Two, Dennis took a sabbatical as the rehearsal days changed to weekdays and eventually went into comedy full-time.

Dennis uses his middle name Hugh as his stage name because the actor Peter Dennis was already a member of Equity; he explained, in an episode of Would I Lie To You that he’d requested to keep his birth name as there was little chance of confusing the two actors, due to their age difference; Equity responded by saying normally this would have been allowed but advised against it as the elder Peter Dennis was the chair of Equity’s name-changing committee.

While an impressionist, Dennis did voices for Spitting Image and appeared with Punt as resident support comics on two TV series hosted on the BBC by Jasper Carrott. Dennis also appeared twice as a contestant on the topical panel show Have I Got News for You, including one opposite former schoolmate Self.

Punt and Dennis’ radio career includes over a decade of performing Punt and Dennis, It’s Been a Bad Week, The Party Line and the satirical radio comedy show, The Now Show. On The Now Show, Dennis is in a line-up including Punt, Mitch Benn, Laura Shavin, Jon Holmes and Marcus Brigstocke. He is friends with Chris Morris and has had cameos on Brass Eye as well as doing the narration for the CBBC show Sam and Mark’s Guide To Dodging Disasters.

In December 2009, Dennis joined Oz Clarke in presenting the sixty-minute Christmas special Oz and Hugh Drink to Christmas broadcast on BBC Two. In December 2010 the pair returned for a four-part series called Oz and Hugh Raise the Bar, which puts them in a competition to create a bar featuring only local British food and drinks.

Hugh Dennis has starred in a number of sitcoms, including My Hero, in which he played obnoxious GP Piers Crispin. From 2007 to 2014, he starred in Outnumbered, a semi-improvised sitcom based around family life and won a BAFTA nomination in the comedy category for the 2009 Christmas special. On Radio 4 he also featured in the sitcom Revolting People which, like Outnumbered, was co-written by Andy Hamilton.

Dennis is a panellist on Mock the Week and has appeared in all episodes since its premiere in 2005 beside his regular television work, with the exception of a special episode of the programme that was broadcast as part of David Walliams’ 24 Hour Panel People. He is a regular guest on various BBC-broadcast comedy panel game shows such as They Think It’s All Over, Would I Lie To You?, QI and has guest-hosted Have I Got News for You. In 2011, Dennis hosted the short-lived improvisational comedy series Fast and Loose.

Beginning on 16 February 2012, Dennis and Julia Bradbury hosted a four-part BBC One documentary series The Great British Countryside. From October 2014, Dennis has started appearing in the sitcom Not Going Out as Toby.

In 2016 Dennis appeared as the Bank Manager in the acclaimed BBC Three series Fleabag, acting alongside Phoebe Waller-Bridge in the first, fourth, and final episodes of series 1. In 2019 he was a narrator in ITV’s series Yorkshire Airport. In February 2021 Dennis started presenting The Great British Dig on More 4.

Hugh Dennis took part in the 2007 L’Étape du Tour, cycling an open stage of the Tour de France for amateurs which were held in the mountains two weeks before the main event. He completed it in 11 hours and 7 minutes. He said: “I was an hour ahead of the broom, the vehicle that gathers the slower riders and disqualifies them.” In October 2011, Dennis completed the Great South Run in Portsmouth for the Alzheimer’s Society.

Dennis was the subject of the BBC One programme Who Do You Think You Are? (broadcast on 12 September 2012) in which he tries to find out more about his two grandfathers and their backgrounds. His paternal great-grandfather was a miner at Kiveton Park Colliery near Rotherham whose younger son, Dennis’ grandfather, served as an officer during World War I, and was coincidentally trained at Dennis’ alma mater St John’s College.

Hugh Dennis is currently engaged to Claire Skinner, they have been together since 2017. However, Dennis has been married twice: to his first wife Miranda Carroll (married in 1987; divorced in 1993), and to his second wife Catherine “Kate” Abbot-Anderson (married in 1996; separated in 2015), with whom he has a son Freddie Dennis and a daughter Meg Dennis. In June 2018, it was confirmed that Dennis was in a relationship with actress Claire Skinner, who starred opposite him in the sitcom Outnumbered. Hugh Dennis, his wife Claire and his children live in London.

How much is Hugh Dennis worth? Hugh Dennis net worth is estimated at around $10 million. His main source of income is from his comedy career. Dennis successful career has earned him some luxurious lifestyles and some fancy cars. He is one of the richest and influential comedians in the United Kingdom. However, his maternal grandfather also served in France during the Great War and was in the Suffolk Regiment. His father was the bishop John Dennis, and he has an older brother, also called John Dennis, who is a diplomat and was the British Ambassador to Angola from 2014 to 2018. Dennis is a supporter of Arsenal F.C., and also a fellow of the Royal Geographical Society.