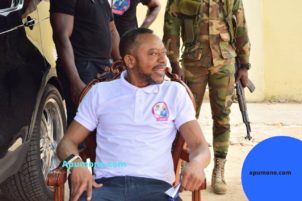 Famous Ghanaian prophet, Rev. Owusu Bempah has emphatically disclosed that he walks around with a loaded firearm ready to defend himself from any attack on his life.

The stylish man of God in an interview at Kingdom Plus on Afrojoint with Fiifi Pratt, said when asked why a man of God would carry a firearm to protect himself, that Jesus Christ did not prohibit his followers from carrying weapons on them.

He added that Jesus himself encouraged his disciples to get more weapons and in that era, a sword was the most commonly used weapon as firearms were not invented then.

“Jesus Christ admonished his disciples to get more swords for themselves; so Peter and John had theirs. So when a soldier attempted to arrest Jesus, Peter drew his sword, not to cut the ears of the soldier but his head.

Jesus Christ then urged Peter to put his sword back to his strap, not to throw it away; so this proves that it was a good thing they were armed with swords” he stated.

Therefore, in place of a sword, he owns a licensed gun which he claimed is fully loaded.

Rev. Owusu Bempah, having said that, disclosed that men of God are mostly the target of many armed robbers or perhaps hitmen.

He, therefore, asserted that it will be wise for a man of God like himself to protect himself from some useless person to come and end his life.