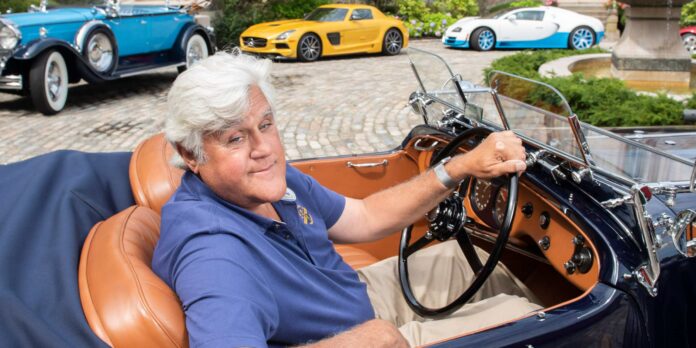 Jay Leno cars: Jay Leno is an American television host, comedian, and writer. After doing stand-up comedy for years, he became the host of NBC’s The Tonight Show with Jay Leno from 1992 to 2009.

Leno started a primetime talk show beginning in September 2009, The Jay Leno Show, which aired weeknights at 10:00pm ET, also on NBC. When it was canceled in January 2010 amid a timeslot and host controversy, Leno returned to hosting The Tonight Show with Jay Leno on March 1, 2010.

He hosted his last episode of this second tenure on February 6, 2014. That year, he was inducted into the Television Hall of Fame. Since 2014, he has hosted Jay Leno’s Garage, and the 2021 revival of You Bet Your Life.

Jay Leno owns approximately 286 vehicles (169 cars and 117 motorbikes) as of 2022. He also has a website and a TV program called Jay Leno’s Garage, which contains video clips and photos of his car collection in detail, as well as other vehicles of interest to him.

Leno’s Garage Manager is Bernard Juchli. Among his collection are two Doble steam cars, a sedan and a roadster that were owned by Howard Hughes, the fifth Duesenberg Model X known to survive, and one of nine remaining 1963 Chrysler Turbine Cars. The collection also includes three antique electric cars — the 1925 Baker Motor Vehicle is his wife Mavis’ favorite car.

He has a regular column in Popular Mechanics which showcases his car collection and gives advice about various automotive topics, including restoration and unique models, such as his jet-powered motorcycle and solar-powered hybrid.

Leno opened his garage to Team Bondi, the company that developed the 2011 video game L.A. Noire, which is set in Los Angeles in the late-1940s. Leno’s collection contains almost one hundred cars from this period, and allowed the team to recreate their images as accurately as possible.

Who is Amadou Onana?: Transfer News: Everton signs him for £33m