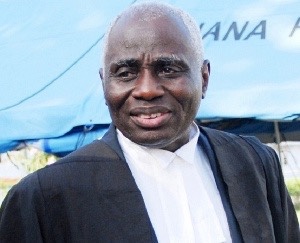 Appearing as a guest on KSM show in Pan African Tv, Tsatsu said even though the ruling didn’t go their way, no candidate had 50% as required by law to be President.

According to Tsikata, speaking on the KSM Show last Friday, the Chairperson of the Electoral Commission, knowing that none of the candidates won the election, went ahead to declare the NPP candidate winner, something that is very problematic and a bad precedence for the country.

Tsikata stated: “Fundamentally, what I think is most problematic about the judgement is that, we have a situation in this country now where if you base yourself on the Declaration that was made by the Chairperson, there was not a constitutionally valid Declaration because no candidate got 50%.

“Mr Nana Akufo-Addo got 49.625% based on the numbers that she herself had announced.

Now what the court then said was that, the next day, there [were] some corrections issued by the EC but those corrections were not by the Chairperson [Returning Officer]; they were unsigned press releases.

Even more important, the numbers in those corrections were different from the numbers on which the court was basing itself as the results of the election.”