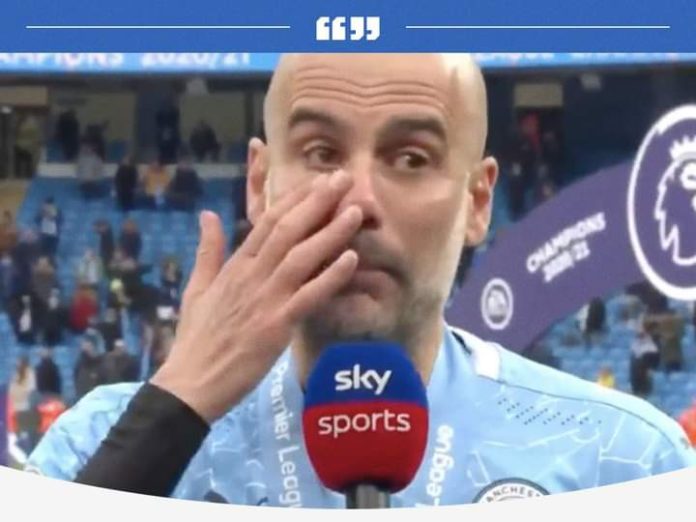 Sergio Aguero’s father has questioned the authenticity of Pep Guardiola’s emotion when paying tribute to the striker in a scathing attack on the Manchester City manager.

Aguero left City after a trophy-laden decade in Manchester and will officially join Barcelona on a free transfer upon the expiration of his contract.

The Argentine extended his lead as the club’s record scorer in his last appearance at the Etihad as he scored twice against Everton on the final day of the season.

After the game, Guardiola was brought to tears in an interview with Sky Sports as he discussed Aguero’s departure, describing him as ‘irreplaceable.’

However, Leonel El Castillo, Aguero’s father, has questioned whether the Blues boss was genuine in his outpouring of emotion and has claimed that he always wants to be the star of the show rather than his player.

“He says that he [Aguero] is irreplaceable and he does not have him in the squad.

“There are things about Guardiola, he is a great coach. But from one day to the next the players change you, the environment changes. You never know if you are a starter or not.

“There is someone who says if you are not here to stay at the club and you have no choice but to change. He [Aguero] was [allowed to stay] until the last time [he renewed his contract] but it was not possible [this time] – team where he is an idol.”

El Castillo also went on to reveal that Premier League trio Tottenham, Arsenal and Chelsea all showed interested in the 33-year-old.

“Tottenham, Arsenal and Chelsea were interested in him until the last moment. If he did not stay in England he would go to Italy.”