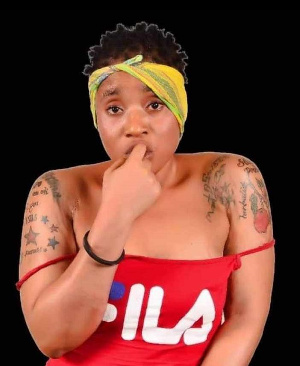 A young lady, resident in Akwatia, allegedly known to be a stripper by name Ama Broni, has died mysteriously while she was twerking naked on stage in Kasoa. In some sketchy narration by some onlookers, Ama Broni was scheduled to perform in a street carnival at Budumburam a suburb of Kasoa in the centeral region.

A rather disturbing video of the event saw Ama Broni stripping her naked butt to entice spectators as she twerks her heavy backside. Things went bad as some of the guys around attempted caressing her on stage.

In an attempt to avoid that, report suggest she fell off the stage and landed in the lighting system for the show which some believe led to her electrocution and untimely death. We are still digging for more information on this story and will keep you updated.