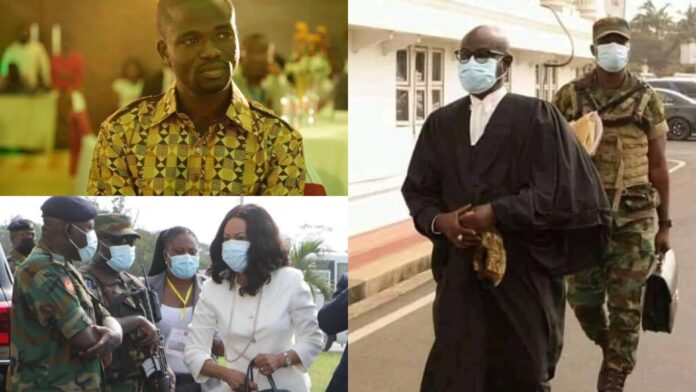 Investigative Journalist Manasseh Azure Awuni Have said one does not need to be a hater of the Akufo Addo led government to see how wrong it is to reduce the military to protecting Jean Mensa and Private legal practitioners like Frank Davies but then anyone with Brain and not sand in his hand is supposed to see it’s a wrong move.

After the declaration of the 2020 election results, every public appearance of the chairperson Mrs Jean Mensa comes with her in the midst of heavily armed military men and not police.
Social media equally erupted when Mr. Frank Davies who is the Lawyer for President Akufo Addo in the election Petition was also seen with a soldier holding his books and bag at the premises of the Supreme Court.

Known for his controversial opinion, Manasseh said he cannot phantom why Ghana police service can fight armed robbers but when it comes to protecting individuals even if they need such then they are sideline for the military.
His Facebook post suggest that single action of the commander in chief of the armed forces who is the President amounts to he undermining the police service and equally reducing the military to errand boys.
He asked “How will the armies of civilised countries look at our army?

This is how he captured it in his Facebook post;
“The Ghana Police Service can fight armed robbers and terrorists. But someone thinks our police cannot provide security for the Electoral Commission Chairperson. So you find armed soldiers following her to court.
How will the armies of civilised countries look at our army?

Soldiers should not be reduced to errand boys for private, party-affiliated lawyers and protectors of illegal mining sites inhabited by Chinese.

This is shameful and it must stop.

NOTE TO YAANOM: You don’t need to hate the government or the governing party to know that this is wrong. Once you have brains, and not sand, in your head, this should trouble you.”