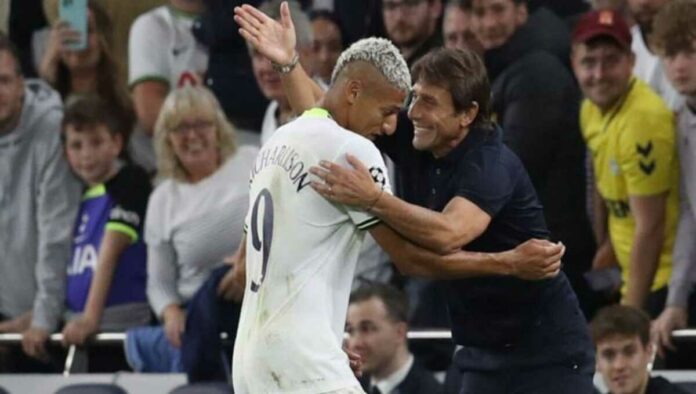 On the night of Wednesday, September 7, 2022, The English Football Club Tottenham secured a 2-0 goal over French Club Olympique de Marseille in Group D, which signified Tottenham Hotspur’s return to the Champions League, which was made possible by Richarlison’s first goals for the club.

The ex-Everton FC forward, who reportedly cost 60 million pounds ($69 million) in the summer, made a superb Champions League first appearance, scoring twice in the late five minutes to give his team a win that had not appeared likely.

In the 76th minute, The Brazil forward sprang to head home Ivan Perisic’s precise cross, and he deflated Marseille in the 87th minute with a nearly identical goal from Pierre-Emile Hojbjerg’s cross.

Richarlison’s two goals covered for Tottenham’s generally subpar performance against a spirited Marseille team until Chancel Mbemba was dismissed for Marseille three minutes into the second half for a tackle on Sun Heung-min.

Richarlison eventually made sure Antonio Conte’s team had a flawless start after Tottenham, who missed out on the Champions League for the previous two seasons, failed to record a shot on target in a lacklustre first half.

Together with Sporting Lisbon, who defeated Eintracht Frankfurt 3-0, they hold the top spot in the group. After the game, Marseille fans battled with officials and the police in ugly scenes as a means of expressing their disappointment.

For the second straight game, Conte started Richarlison alongside Harry Kane and Son Heung-min, two of Tottenham’s seasoned strikers, and he was amply rewarded.

Tottenham manager Conte recalled Richi’s words when he joined the team: “I can’t wait to play in the Champions League and listen to the music.”

“A player has great desire and great will when he uses these words. This morning, I advised him to savour the occasion because it was his.”

Richarlison’s weekend effort against Fulham was disallowed, preventing him from scoring his first goal for Tottenham.

He didn’t have to wait long, though, to get his first goal, as he gave Tottenham’s offence the cutting edge it had lacked during the Group D opener.

Like Tottenham, Marseille had an undefeated start to the season and controlled the game in the first half.

The visitors appeared more skilled around the field, and Tottenham was unable to generate any offensive impetus.

Matteo Guendouzi, a former Arsenal player, controlled the midfield and compelled Tottenham goalkeeper Hugo Lloris to make a diving save in the last seconds of the first half.

However, Marseille took a hit when Son was let through on goal in the 48th minute and was harshly brought down by Mbemba, who was given a red card by Slovenian referee Slavko Vincic.

Even at that point, Tottenham was having trouble making an impact, and Marseille appeared poised to earn a point, but Richarlison’s powerful header past Pau Lopez came from Perisic’s exquisite right-footed cross.

The Brazilian then found space in the area to glance Hojbjerg’s throw into the net off the post in the 81st minute as Marseille did not learn their lesson.

Ben Davies stopped a shot from Cengiz Under that would have given Marseille a chance to score, but the French team was left wondering what could have been.

“We’re annoyed. At 11 versus 11, we were competitive with them and perhaps even superior “Valentin Rongier, the captain of Marseille, commented. We regret a lot because we could have achieved our goal even with 10 men.