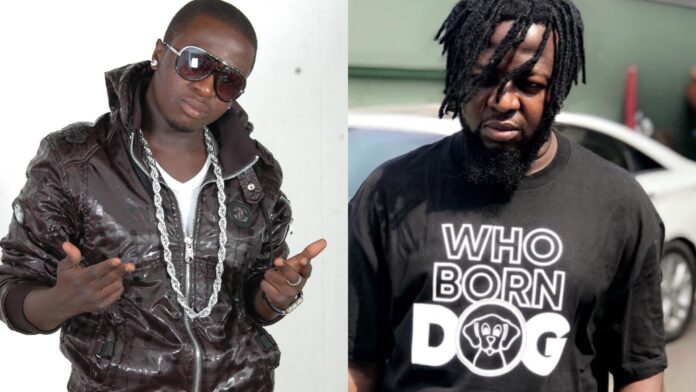 INTRODUCTION
When the whole issue of Lynxx Entertainment denying Guru an opportunity to have a feature with their signees Kuami Eugene and Kidi came, I did a writing on how imperative it was for Kuami Eugene to stay focus and never inherit an “enemy” he never made for history has shown that no artiste perhaps stayed with Lynxx Entertainment forever, If In doubt let me remind you of Asem, Mzvee, Zigi, Eazzy etc.

Even if they do, every musical season comes with its “Kings” and “Queens” and reigning forever is impossible. So even as he remains the hottest artiste today, he will have to be measured by his actions because same people you see when climbing are same people you may meet when coming down.

That particular writing was inspired by Guru’s response to Kuami Eugene at the time where Guru stated he only wanted to appreciate his fast rise and nothing more. I was touched with Guru maintaining that indeed nobody reigns forever. It was really a striking response which encompasses phases of life and how you can be on top today and down tomorrow.
That reply was a matured one, it was short but came with all details that should guide the steps of those young lads in the entertainment circle now in Ghana.

This reply I believe made Guru a Wise Hero in the eyes of some of us who came across it. But is that case as we speak ?

ON GURU GOING LOW
I highly rated Guru for that single act of maturity but I must say, for Guru to move ahead from that reply to record a “diss” song for Kuami Eugene and Lynxx Entertainment is the most absurd action any reasonable person will take at a time people have bought into your matured response to bring finality to the matter.
His recent action exposes his clandestine motive of crying wolf when there was none.

It is not just the diss song he did but the derogatory stuff he said in that rubbish of a song and his overly quest to enjoy some forgone clouts beats my imagination.
Reason is simple, with his recent behavior and how offtrack he’s going with the issue between him and Kuami Eugene, Guru has now missed a golden opportunity to remain a wise person and now embracing buffoonery. How can he simply coin in the mother of Kuami Eugene in this whole saga? The worse of it all is when he kept referring to Kuami Eugene as “Abofra” as though It’s him Guru who feeds him.

When Guru featured on Obrafuor’s Kasiebo, he was equally a young promising act.
Even though he claims that was when the “hate” of Obuor, Okyeame Kwame and Richie Mensah begun, not even a single occasion can one cite any of the aforementioned top industry people getting at him like he is doing with Kuami Eugene now. He is just fixated on playing the victim just to pour out his frustration and how envious he has become of those making hits Songs now.

All Guru is doing now is for some is to get some few attention to see if he can turn things around for himself. Even with respect to that, his followers on social media(Facebook,Twitter, Instagram) is not even up to a million yet if you put all his numbers together.

Guru is a good hitmaker, that is not in question but over the years, he has failed to come to terms with how fast our music taste as Ghanaians have changed consistently.
Almost all the songs of Guru that made headlines came during the era of the “Azonto” craze.

Guru has remained stagnated with that style when the rhythm has switched to Afro beat and other genres.
Until he comes to terms with that and produce what is really moving the market, he will spend the next year or two throwing tantrums and blaming everyone who express a contrary opinion to his.

Of all the things Guru has done in the last few days, going overboard by bringing in Kuami Eugene’s mother into this whole feud is very unfortunate.
I believe he’s got a mother himself.
Even if Kuami Eugene’s remark portrayed his mother in a bad light, it is not for him Guru to re-echoes those despicable words.
He is virtually blaming everyone for his predicament apart from him. Snippet of an interview he had with ZionFelix is below for your own judgment.

THE ALWAYS FAKE MEDIA AND HATERS TAG
What most of these musicians fail to realize is that, the media owes them no loyalty.
People set up media houses for profit and not to promote a particular brand.
Many often, the media becomes their target in all their needless beef and that is the tangent Guru has also taken to.
His outburst is that the media is fake and the industry is full of favoritism.
These same fake media played his songs for it to be hits.
If Guru will not appreciate the media for making him a known Artiste, he shouldn’t be an ingrate either by labeling same media which still plays his musics as Fake.

He should be grateful, his recent behavior spark thought of him been envious of those reigning now which includes Kuami Eugene.
In fact, Guru had his time and his time time could yet come again, he should not destroy the same stakeholders he fell on in the past and will fall on in the present if he releases a new track by calling them fake.
You don’t destroy the very people who supported your songs even when most of the lyrics were sampling of street terms and in some cases didn’t make sense but still got massive promotion.

Guru started this whole thing well with his reply to Lynxx Entertainment and Kuami Eugene but he has gone overboard by involving the mother of Kuami Eugene and saying despicable stuff about the woman trying to force that onto Kuami Eugene
If it’s hype he want badly to revive his career, he must come clear. There are quite a number of decent means to get hype than this one he is on.

BASIC PROBLEM OF THE MUSIC INDUSTRY
Without a doubt, there are fundamental issues with the Ghanaian music space.
The major players in the industry themselves are not doing enough for them to be taken serious.
I am not in anyway downplaying the relevance of “Beef”.
Beef or rivalry has always been part of the music space.
So beef are not entirely wrong, but the big question is how has that contributed to the collective growth of the industry ?
At least if you want to be taken serious, you must first act as serious. Policy makers are perhaps not taking entertainers in the country serious because, they are easily distracted on what should be their collective responsibility and turn to battle themselves.
These same guys will turn around and blame the media for not pushing their agenda when they are not setting any positive agenda.
These musicians blame investors and government for going blind on the sector, but they are not even making the sector attractive to bring onboard what they desire for.

UNDERSTANDING THE RELEVANCE OF BEEF
Musical beef should ultimately be a win for Artistes, but in doing that you don’t lose focus of the entertainment for it does not have to be “Personal”
With his recent outburst, Will Guru tomorrow ask for a feature with Kuami Eugene after he deliberately brought in the singer’s mother into the issue?
We have read of what led to the disappearance of Tupac, we can perfectly remember how Stonebwoy pulled a gun stage all in the name of beef with Shatta Wale.
We also know what has become of Vybz Cartel with respect to music banters and most importantly we are aware of the untimely demise of Unruly Grank; a young Artiste of Cape Coast and how he needless died because of beef.
So even as we entertain some of those beef, they should purely be on the basis of fun and nothing acrimonious.
Already, Nigeria’ music space which is equally having these same beefs seems to be growing with new Artiste from them breaking to the global stage almost every year leaving Ghana behind.
We have multiple talented musicians here in Ghana who cannot fill an 800 capacity auditorium outside Ghana but that is not even a concern to these musicians but insulting themselves and saying unfortunate stuff remains their biggest priorities.

GURU MISSED THE CHANCE TO BE SEEN AS A WISE PERSON
In all of this ongoing brouhaha between Guru and Kuami Eugene, it is Guru who has lost an opportunity to truly appear as a level headed person.
The very person he want this whole thing to go on with, has taken solace in smartness by not further replying him(Guru) by his words.
In his quest to appear as god which he is not, Guru if he has some integrity is only helping to denigrate it.
What is even the issue? Someone refused a feature with you and all of sudden the world should come to an end ?
How many persons was he Guru able to help with his verse when he was reigning?
Can he say he honored all features he was asked to ? Did he show respect to the very people he met in the industry on his rise to stardom ?
Today, simply because he was denied a feature he’s attacking almost everyone on his social media handles.

CONCLUSION
I don’t know how all these will end, but I hope it will help the industry to grow than break it down further.
The movie industry started like this and today almost all our top actors are out of business with foreign telenovelas taking over our screens.
I remember how some actors refused to appear in certain movies because a colleague he or she is having issues with is also a character in that movie.
The entertainment industry is vast.
If it’s handled properly, it can become the biggest employment sector in the country.
Policy makers may not be compelled to draft transformative bills and put the right structures down until our musicians themselves come together as a unit and fight for a common purpose.
Today if it’s not Medikal beefing Teephlow, then it’s Yaa Pono calling out Shatta Wale for Beef.
If it’s not Samini trying to resurrect an all feud with Shatta Wale then it’s Stonebwoy throwing jabs at others.
The industry cannot grow with these pettiness and the earlier we tell our musicians this truth, the better.