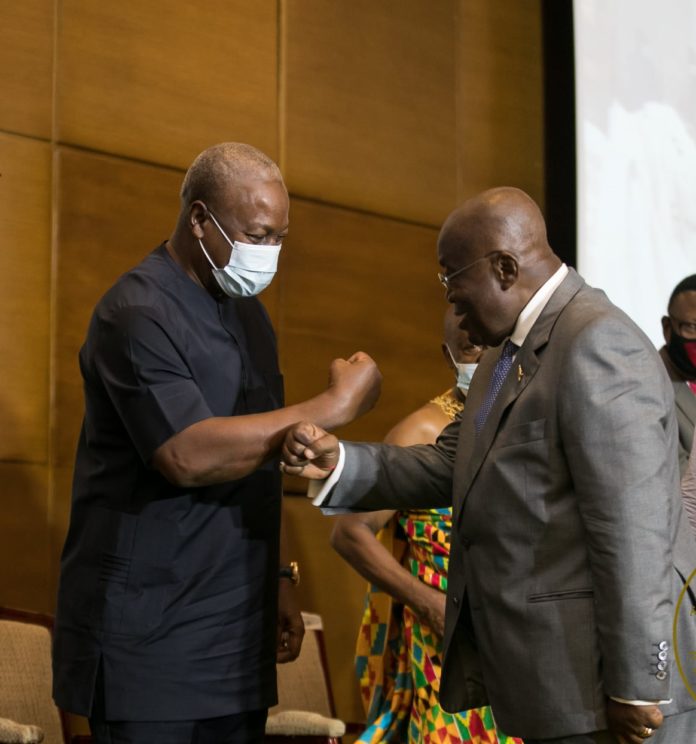 Flagbearer of the opposition National Democratic Congress (NDC) in the 7th December 2020 general elections and former President of the Republic, John Dramani Mahama, is expected to congratulate his main contender, President Akufo-Addo, for winning the 8th elections held under the 1992 4th Republican constitution after nearly four (4) months of failing to do same.

Sources close to the functional executive of the NDC have hinted to Asaase News that John Mahama will finally concede and congratulate Nana Akufo-Addo for winning the 2020 presidential election. Mr. Mahama, has been dilly dallying about this for a while now.

One of Asaase News’ sources within the NDC confirmed that a few weeks ago, the NDC election 2020 flagbearer wrote a concession statement to issue but was impressed upon by some hardline members of the party and decided against its release.

Another source close to the former President says he himself was settled about conceding and congratulating President Akufo-Addo but was concerned about the negative reactions that were bound to follow from the rank and file of his party.

Also Read: Father to be walks away from Child birth, his reasons is shocking

Former President Mahama twenty-one (21) clear days after the declaration of the election results by the Chairperson of the Electoral Commission and returning officer for Presidential election in Ghana, Jean Mensa, on the 30th of December 2020, filed a petition at the Supreme Court seeking to annul the election results and praying the Court to order a run-off election between him and President Akufo-Addo. After about sixty-four (64) days of adjudicating the petition, the seven-member Supreme Court panel presided over by Chief Justice Anin Yeboah, on the 4th of March 2021, dismissed the petition as lacking merit.

In his address to the media a few hours after the Supreme Court judgment, Mr. Mahama noted that while he is well aware that he is bound by the Supreme Court verdict, he disagrees vehemently with the Court’s decision. Political scientists and commentators after his address expressed disappointment over the fact that the NDC flagbearer failed to concede defeat and to congratulate Nana Akufo-Addo for winning the 2020 Presidential elections.