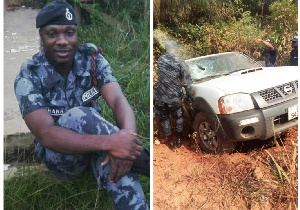 Some unidentified 10 gun men have shot and killed one police officer, L/CPL Babah, on the Adansi Fomena road in the Ashanti region.

According to police sources, the armed robbers made away with an amount of GHC500,000 in the bullion Van, plus one AK 47 rifle after their criminal operation on 19th January 2021.

A police situational report on the incident described it as “robbery and murder” and mentioned the date as of January 19, 21 when the attack happened.
The sad incident happened at about 10:30 am at Adansi Nyankomesu in the Ashanti Region.

The report said, “about ten young men unmasked wielding assorted guns, including AK 47 rifles attacked and robbed a white bullion Van with registration No. GT 543-19 from Ghana Commercial Bank, Dunkwa to New Edubiase, fired indiscriminately from the rear and facing the van.

The robbers attacked the Van on the section of the road between Obuasi and Asokwa Junction at the outskirts of Adansi Nyankumaso Community and made away with five hundred thousand Ghana cedis (500,000.00). No. 51799 G/L/CPL Babah Martin of Dunkwa Police on board the said vehicle on escort was shot by the robbers on the left leading to his death at the spot.
L/CPL Babah, was shot in the car, and his remains have since been deposited at Peace Land Morgue to be conveyed to Police hospital, Accra for preservation and autopsy.

Investigation has commenced to bring the perpetrators to book to face the full rigorous of the law.