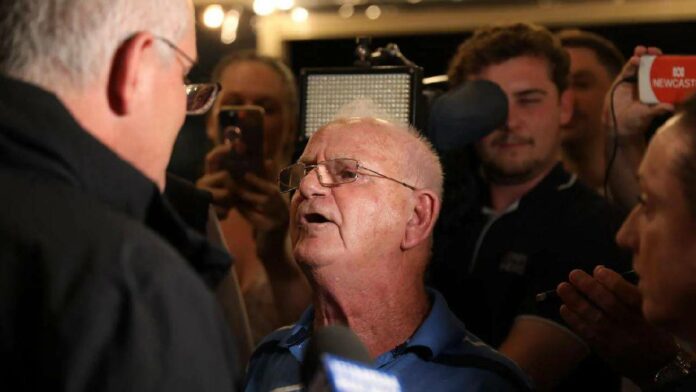 Raymond Drury is an Australian disability pensioner. He is best known for confronting Prime Minister Scott Morrison angrily at a pub in New South Wales. Drury stated that he regrets nothing after his incident.

Drury was born in 1949 (age 73 years) in Sydney and raised there along with his parents, friends and siblings.

However, During an exclusive interview with NBN News on Wednesday night, Raymond Drury said he had been abandoned for years over his problems.

Drury said he reached out to many members of parliament but none of them listened.

“When this stewing up and everything like that over 12 years and being rejected, not even listened to, of course, I’m going to take that opportunity,” he said of his decision to confront Scott Morrison in a fiery exchange at Edgeworth Tavern in Lake Macquarie.

In a video that is trending on social media, Mr. Raymond Drury can be heard shouting at Prime Minister Scott Morrison: “listen to me for a change”.

Drury loudly yelled at PM Scott Morrison that “better f*ing do something” and that he was “sick of your bullst”.

Raymond Drury who is 73-year-old said he had worked in mining for 30 years before retiring.

Drury said he received weekly compensation through the Dust and Disease division of iCare.

It provides treatment and financial support to workers who have a disability as a result of a compensable dust disease contracted in a NSW workplace.

But that payment has eaten into his pension with $200 deducted a week because of the additional income.

“(I’m) being ignored by everybody when I’ve got a right to earn some income too.

Drury said after speaking to the Prime Minister’s staff, he felt hopeful it would get resolved – but he had a warning if it didn’t.

“I reckon it will happen, I’m going to follow this around every place the Liberals go.”

Raymond Drury’s comments come after PM Morrison downplayed the frosty exchanges he had with angry locals at the pub.

The Prime Minister said the case involving Mr Drury was “complicated” when asked about it on Thursday morning.

“He was very upset about a complicated case involving iCare and immigration issues. It was also involving income definitions under the pension regimen,” Mr. Morrison told reporters.

“He had a lot of complications with those cases.

“And my staff met with him also after I carefully and respectfully listened to what he had to say.

“I can understand that he was very upset … And I was keen to understand what he was saying to me and I believe we have.”

As The Prime Minister looked toward the camera, she told him: “Congratulations on being the worst prime minister we’ve ever had.”

Mr Morrison was asked if he was prepared to have more encounters like those on Wednesday night over the course of the election.

“We are out there meeting with people and talking to people about our plans going forward,” he said.

@ScottMorrisonMP being confronted by an angry punter at the Edgeworth Tavern tonight #auspol @newcastleherald pic.twitter.com/dBGYCGQeAH